The message has now become clear regarding Deontay Wilder’s future—no new business until he settles up old matters.

Mere days after revealing plans for a fall rematch with Luis Ortiz, the reigning unbeaten heavyweight titlist now claims plans are in place afterward to run it back with Tyson Fury.

“Well, As I always say I’m the realest champion in the business and as I’ve mentioned before I must handle all my controversial fights ASAP,” Wilder (41-0-1, 40KOs) announced through his verified social media account on Friday. “Luis Ortiz is first then Tyson Fury [n]ext.” 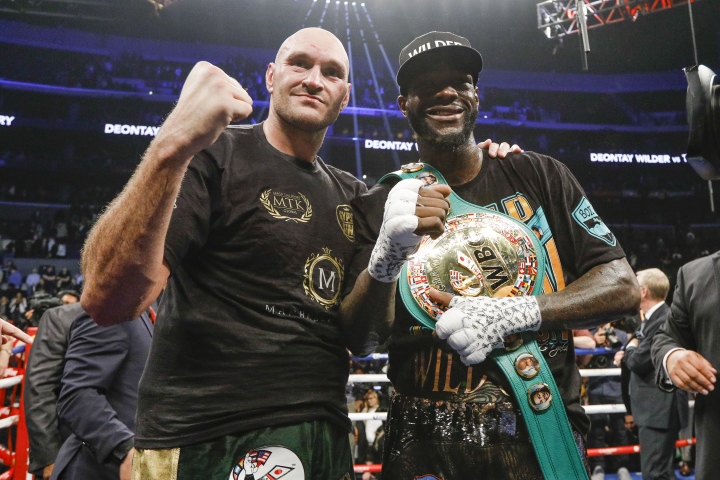 Wilder was due to begin his 2019 campaign with round 13 versus England’s Fury (27-0-1, 19KOs), with whom he fought to a disputed 12-round draw last December. The two sides were dangerously close to agreeing on all terms for a celebrated rematch this spring, only for the unbeaten Brit to call an 11th hour audible and instead align himself with Top Rank and ESPN.

At the very least, the move stalled plans for the two heavyweight behemoths to once again collide. Wilder—who is aligned with Showtime and, by association through Premier Boxing Champions, Fox Sports—went on to face mandatory challenger Dominic Breazeale, whom he destroyed via spectacular one-punch 1st round knockout on May 18 in Brooklyn, NY.

The fight kicked off a five-weekend stretch featuring fights involving “The Big Three” at heavyweight—Wilder, Anthony Joshua (whom faces Andy Ruiz on Saturday) and Fury, who has Germany’s Tom Schwarz up next on June 15 in his Las Vegas debut.

Should Fury prevail, BoxingScene.com has learned that a signed agreement is in place for the two to collide in early 2020, as per four separate sources including Wilder's manager Shelly Finkel. Tentative plans call for Fury—assuming he emerges victorious and unscathed versus Schwarz—to take another bout in the fall prior to their planned rematch.

Of course, Wilder still has to get through his first big reveal this week, as a date and location has yet to be announced for his second fight with Ortiz. The event will land on Showtime Pay-Per-View, currently targeted for late September at Staples Center in Los Angeles—which hosted Wilder-Fury I last December.

Ortiz (31-1, 26KOs) appeared on the undercard of that event, scoring a 10th round stoppage of Travis Kauffman for his second win following his knockout loss to Wilder in their back-and-forth thriller last March in Brooklyn, New York. The bout had a couple of bizarre moments—including Wilder given extra time to recover after being rocked badly midway through the fight.

Beyond that, he was slightly ahead at the time of the stoppage but with momentum well in his favor by that point and scoring a conclusive ending. Whatever controversy requires resolution is as much of a mystery as to when the rematch will be formally announced.

Nevertheless, the fight is coming as the unbeaten titlist doubled down on his fight reveal, both coming ahead of Joshua’s first fight in the United States as he defends his slew of heavyweight titles versus Ruiz (32-1, 21KOs). The industry-wide hope was that following this weekend—and with a Joshua win—talks would then turn towards a titanic showdown with Wilder for the undisputed heavyweight championship.

It’s a fight that Wilder chased for two years only to be told what terms he needed to accept in order to make the fight happen. The American heavyweight has now chosen to return to the favor, with the next year or so of his schedule not currently boasting room for Joshua.

“By no means I’m I looking pass Ortiz,” promises Wilder, who will look to make the 10th defense of the heavyweight title he claimed in Jan. 2015. “He’s a dangerous fighter but I am looking through him (Window Shopping).

“Shid, I’m the best, ain’t No guess’N...what other champion give you what your Miss’N... One fell to his Knee, the other on his Back... If you got questions then we run it back."

The only question at this point is when those fights will be formally announced—and how far down the road exists a showdown with Joshua, if even at all.

That is the way I see it. Fury is promoted with Arum and Warren. Maybe he fights Jennings -Joyce winner next, maybe Rivas if Rivas beats Whyte, which is unlikely. Maybe even Whyte if Whyte beats Rivas. Ruiz must rematch…

[QUOTE=Zelda;19835146]Well, apparently Fury also said he has a fight next and then Wilder in 2020. Bob Arum also said, in the post fight interview, that Fury-Wilder takes place in the first quarter of 2020 possibly in Vegas. I am assuming…

Well, apparently Fury also said he has a fight next and then Wilder in 2020. Bob Arum also said, in the post fight interview, that Fury-Wilder takes place in the first quarter of 2020 possibly in Vegas. I am assuming…

If this holds, then it’s great! Does anybody know Ortiz’s purse for this rematch? More or less than 7M?