Wilder: By Third Round, My Legs Was Fully Gone; Surprised I Went That Long

As soon as Deontay Wilder removed his heavy costume in the ring Saturday night, he felt something was wrong with his legs. (photo by Ryan Hafey)

Wilder realized right then that he wouldn’t be able to implement his game plan in his rematch against Tyson Fury. The former WBC heavyweight champion went into what he called “survival” mode early in his seventh-round, technical-knockout defeat at MGM Grand Garden Arena in Las Vegas.

“Immediately, when I took it off, I felt my legs and I was like, ‘Oh, sh-t! I done put myself in a situation,’ ” Wilder said. “But I’m a warrior, man. I’m a king and I fight off of my shield. That’s how I like to go, on my shield. And I just had to accept responsibility that’s what it was, and fight from there. You know, many people probably would’ve made excuses and quit, but nah, no matter what the results was, I wanted to go in there like a warrior, a true king, a man, and go in and fight off my shield.” 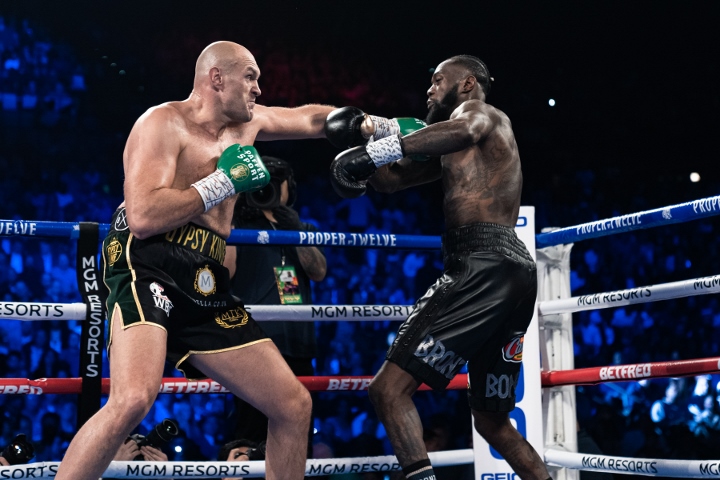 Wilder tried on the bulky costume, which he considered a tribute in recognition of Black History Month, the night before the fight. The $60,000 outfit weighed 40-plus pounds, according to Wilder, but it wasn’t cumbersome enough during his dress rehearsal to make him think twice about wearing it during his ring walk.

“I tested it the night before and it felt like it was OK,” Wilder said. “But we thought we was gonna be able to time it all from the dressing room to the ring walk. But we was in the dressing room a little bit longer than we timed it. And by the time we was going out to the ring walk, you can tell I was walking kinda funny, you know, walking out. But it was a tribute and I was like, ‘I’m gonna wear it and see what happens.’

“On the wobbly legs, it was all about survival. So, I didn’t get to use what we had worked so hard on and I looked so great doing in camp. I didn’t get to use those things because of my mistake that I made at the last minute. But I take full ownership of it, we learn from our mistakes and we carry on.”

The 6-feet-9, 273-pound Fury floored Wilder twice, once in the third round and again in the fifth round.

Wilder contends that Fury hitting him on the back of his head caused the first knockdown. Fury landed a left hand to a backpedaling Wilder’s body to send him to the canvas in the fifth round.

“By the third round, my legs was fully gone,” Wilder said. “And then, that’s when he started hitting me in the back of the head, knocking my equilibrium off a little bit. My legs were so gone that even if he would’ve tapped me, I probably would’ve fell. Because you know that body shots and all that doesn’t faze me at all. Many people could tell that wasn’t me up in that ring immediately. But I did it to myself. I totally did it to myself and I wasn’t gonna back down. I was still gonna fight like a true warrior and do what I do. You know what I’m saying? Win, lose or draw.”

The 6-feet-7, 231-pound Wilder was still standing when his assistant trainer, Mark Breland, threw in the towel during the seventh round. At that point, Wilder was backed into a neutral corner, taking unanswered punches from Fury.

“I had no legs,” Wilder said. “I’m surprised I went that long. I had no legs, and I knew I was in for a fight with these legs and the condition I was in. It was crazy. But, you know, again, it’s nobody’s fault but mine. I wore the costume that was that heavy, and I paid the price. I traded the tribute to men and women [for] my title, and you know, as a warrior, I was gonna fight. My job was to fight under any circumstances, as a king, and that’s what I did. And I don’t take nothing back.”

Alabama’s Wilder (42-1-1, 41 KOs) told BoxingScene.com and other outlets Monday that he’ll exercise his contractual right to a third fight with England’s Fury (30-0-1, 21 KOs). He has 30 days from Saturday night to do that.

According to their contracts, that third encounter is supposed to take place by July 18. Bob Arum, Fury’s co-promoter, has said, however, that it’s possible it could take place later than that.

I love how he's trying to imply that a 40lb costume weakened his legs, as opposed to the 6'9", 270lb guy pushing him back, walking him down from the opening bell, and mauling him whenever he got inside. Going off…

[QUOTE=fernandtg;20434627]He didn't because he wasn't able to that night. He was good enough to beat him for 10 rounds though. Wilder has given an absurd amount of excuses by now (ref, outfit, fouls, dirrell conspiracy). Not only the sheer amount…

[QUOTE=Marchegiano;20431435]I suppose he shouldn't answer any questions out of fear they be taken as excuses? It's not like this **** comes up in a vacuum out of nowhere. There is a prompt, there is an answer, and there is acceptance…

[QUOTE=fernandtg;20431327]Taking responsibility goes beyond saying so. If you say "no excuses" and follow up with 3 excuses, you're making up excuses. Regardless if he truly believes them to be true, they're excuses. Being 'aware' of it doesn't change that.[/QUOTE] I…

Yes, your legs were gone by round 3 as you couldn't handle the heat Fury brung. The bodyshots you got caught with you probably felt you was slowly drowning.