Dillian Whyte and Tony Bellew have hardly been the best of friends in recent years.

Their rivalry aside, Whyte wants Bellew to beat David Haye again Saturday night and humble Haye once and for all. Whyte dislikes Haye because the British heavyweight contender has always found the former WBA heavyweight champ to be “very disrespectful” and “very ignorant,” and not just toward him.

“It’s funny – me and Tony, we’ve had back and forth, but we’ve spoken a couple of times,” Whyte told Sky Sports for a story posted to the network’s website Tuesday. “Tony is alright. David is a very ignorant guy. Very disrespectful.” 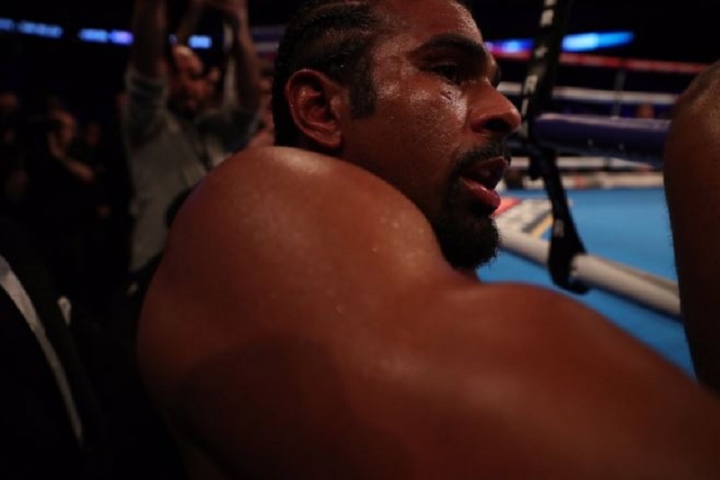 “Right now, I would like to see Tony Bellew tuck him in, to be honest, again,” Whyte said. “I’m not just saying that because I’m a Matchroom fighter. I’m saying it based on David Haye’s behavior and his attitude. He’s shown how disrespectful he’s been to every other fighter. He always writes me off as well. I would like to see him get tucked in.”

Bellew and Haye will square off at the same venue where Whyte (23-1, 17 KOs) scored a sensational, sixth-round knockout of Australia’s Lucas Browne (25-1, 22 KOs) on March 24. Haye attended that bout and complimented Whyte’s win, but the Jamaican-born, London-based Whyte noticed Haye detracted from his performance, too.

“David never says anything good about me and never tries to support anything I do,” Whyte said. “He always tries to belittle my performance, apart from the last performance.

“He said, ‘That is a thrilling knockout, one of the best knockouts I have ever seen.’ But then he went, ‘To be honest, Browne wasn’t in the best of shape.’ That’s the shape Browne is always in, so what you are saying doesn’t make any sense.”

While Whyte clearly dislikes Haye, he expects the 37-year-old former champion to perform well in this rematch. Whyte knows Haye realizes another loss to Bellew – who stopped an injured Haye in the 11th round nearly 14 months ago at O2 Arena – will in effect end his career at the top level.

“I think he's dangerous, because he’s fighting a lot on pride this time,” Whyte said. “David is one of those guys who has got a big ego and his pride has been hurt. Now, for once, he’s fighting for his career. He’s never really had to fight for his career, ever.

“He knows one [more] loss, that’s it for him. So I think he will be very dangerous and very determined. He knows what’s at stake. Bragging rights, everything is at stake, so I believe he will go the extra mile. He’ll come to fight. He will be in there swinging away, until he cannot swing away anymore.”

[QUOTE=Liondw;18729466]To be fair to Haye, he did ko Chisora, while Dillion had an exciting and close split decision victory where no one really would have complained if the decision went Chisora's way.[/QUOTE] So far, I have not read that many…

[QUOTE=Enzo Mc is ****;18730151]I'd be genuinely up for seeing Bellew vs Price, but I don't think they'd be up for making it happen.[/QUOTE] Right, that's why we need Haye to win so this faded version of the Hayemaker can go…

[QUOTE=BigZ44;18729859]LMAO at Haye bringing his own posters with himself as the A side :lol1: This guy's ego knows no bounds. You can tell every time Bellew says something Haye just wants to explode and Bellew is loving it. With that…

A grudge between these three would make sense