Whyte Reacts To Usyk Being Mandatory: Boxing is Full of Sh*t!

Heavyweight contender Dillian Whyte has been climbing up the ranks of the WBO, and secured the number one position.

He was confident in eventually receiving a mandatory world title shot. 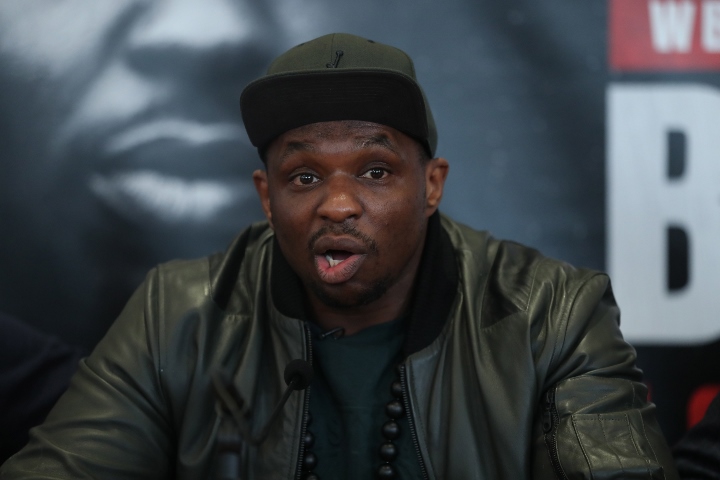 Usyk, who last year unified the entire cruiserweight division when he defeated Murat Gassiev to unite the WBA, WBC, IBF and WBO titles, has yet to fight at heavyweight.

But the WBO has a rule, where a champion moving up in weight can automatically become a mandatory challenger in their new division.

Usyk's handlers filed their petition to secure the mandatory spot - and the WBO approved their request.

Whyte has been the WBC's top rated challenger for 600 days. He was passed over earlier this year, when the WBC made Dominic Breazeale, ranked at 3, the official mandatory.

The latest news about Usyk has fired Whyte up.

“If I say what I really feel about these things, I might get removed from the rankings,” Whyte told talkSPORT.

“I start saying stuff and they send me emails and letters saying I can’t say these things and it’s disrespectful. But the fact that they’re disrespecting me constantly doesn’t mean anything. Boxing’s full of sh*t, basically, and we see it time and time again.

“It’s a joke. He pulled out of the [Carlos] Takam fight. These guys are jokers. It is what it is.”

Whyte is back in the ring on July 20, when he faces undefeated Oscar Rivas at The O2 in London.

“I’ve got a big fight ahead of me and I just want to focus on that,” he added.

“Rivas is a tough challenger. He’s coming to win and he’s undefeated. He’s never lost before.”

[QUOTE=Ray*;19864363]Every time i ask anyone to back up the "Whyte turn down a WBC eliminator" they always come back with the IBF thing. No mate, re-read the question. Show me where Whyte turned down a WBC final eliminator....Am still waiting…

[QUOTE=kavi521;19864126][url]https://www.boxingscene.com/luis-ortiz-vs-dillian-whyte-wbc-final-eliminator-ordered--127502[/url] [url]https://www.bbc.co.uk/sport/boxing/43625503[/url] Guess these 2 links above are fake as well. Don't just listen to Sky Sports and Dillian Whiye. He has had enough chances to is kicking hi,self for not taking the AJ in April.[/QUOTE] Every time i ask…

[QUOTE=Ray*;19859238]Another fake post, show us where he rejected a “Final eliminator” against Ortiz and Fury. Don’t try and add a bit of lie (Him rejecting a final eliminator” from the WBC) to him rejecting the Pulev and Joshua fights (Truth).[/QUOTE]…

Ruiz should give up the IBO to let Whyte fight for it just to shut him up.

This ******* turned down multiple fights so shut your damn mouth.