Whyte: I Would Have Smacked Jarrell Miller, Kicked Him in Nuts

Joshua was present on American soil to promote his mandatory title fight with Alexander Povetkin on September 22 at Wembley Stadium in London.

However, Miller interrupted the head-to-head meeting between the two heavyweights to confront the unified champion, who responded to the goading by exchanging some profane statements. 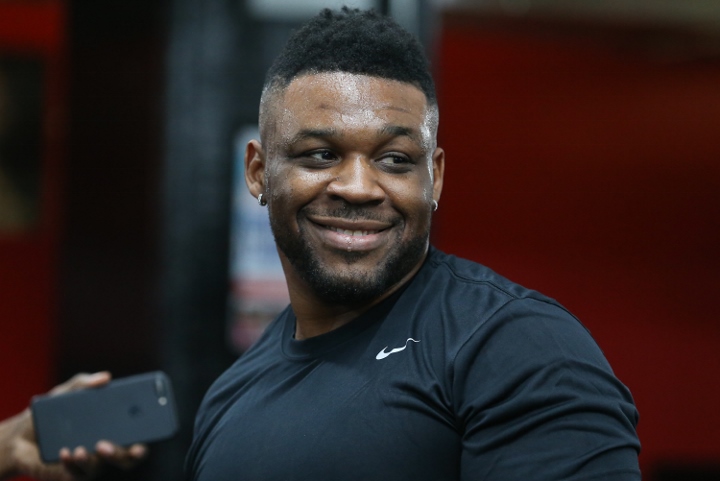 The pair were quickly separated on stage by promoter Eddie Hearn but, asked in a video interview with Sporting News if he saw fear in Joshua's eyes during their head-to-head, Miller replied: "Most definitely. Most definitely.

"Nobody brings it to him like that. He tried to shut down [Dominic] Breazeale and some other guys who talked s***, but I ain't the one, I ain't the one. I would have flipped him on his head if there was nobody in between us."

Miller was presented as one of a number of new signings by Matchroom USA following their rights partnership with DAZN.

While he will have to wait for his shot at Joshua, the fighter nicknamed 'Big Baby' is ready and willing to travel for a crack at the undefeated Briton.

According to Whyte, he had no problem with Miller confronting Joshua, but at the same time he was angered by Miller making statements about Joshua's mother during the fiery verbal exchange.

"I thought it was good that he went up and shouted at [Joshua] as he is looking for a opportunity and looking for a fight. When you are 'the man' you have to expect these things, but what he said about his mum is not on and I would have smacked him there and then. I would have smacked him right there with a three-piece combo and kick him in the nuts," Whyte told IFL TV.

[QUOTE=JWHardin;18970489]Exaggerating and spinning seems to be your specialty. Not doing enough research to support your claims is your downfall. Ortiz had about 350 amateur fights, not 500. Whyte had 6 bouts, which makes his win over Joshua in the amateurs…

[QUOTE=LacedUp;18969869]Mate what are you smoking? Ortiz had 500 amateur fights and Whyte had 20 :lol1: They are completely different levels experience wise, and as it stands Whyte probably has a better resume than Ortiz :lol1: Yes Whyte fought Allen to…

[QUOTE=JWHardin;18969065]Whyte did call out Ortiz but backed off when Hearn said ok. He fought a guy I'd never heard of instead. As far as Ortiz's cherrypicking, with nearly the same amount of fights as Whyte, he fought and KO'd Allen,…

[QUOTE=LacedUp;18968380]What do you mean no one would fight him :lol1: Who has he offered to fight? Dillian Whyte called him out 2 years ago! He was gifted some incredible cherrypicks and stunk the place out. He got his chance and…