Who's Going To Win? The Most Dangerous Question in Boxing

I was interviewed on a sports-talk radio show in the U.K. the night before the Anthony Joshua-Andy Ruiz fight and said with confidence that I saw no realistic way Ruiz could win the heavyweight title fight.

That’s just one of my many regrettable answers to the most dangerous question in boxing: Who do you think will win?

I answer the question because, one, it’s part of the job, and, two, it’s fun to speculate on what might happen in the ring in a big fight. We all do it, fighters, writers and fans. You do the best you can and then live with the egg on your face when you’re wrong.

I’ve been wrong quite a bit.

Early in my career I wrote a column railing against a light heavyweight title matchup between unbeaten (and future Hall of Famer) Virgil Hill and an aging Thomas Hearns, who I thought had no business in the ring with such a gifted young star. The result? Hearns won a unanimous decision. Ugh.

I go back to the first fight between a resurgent Mike Tyson and a “declining” Evander Holyfield, which I (along with many others) thought Tyson would win easily. Oops!

More recently I said publicly – and emphatically – that sturdy Jarrett Hurd was essentially unbeatable at 154 pounds. Julian Williams then proceeded to dominate Hurd, win a version of the junior middleweight title and make me look clueless. Oh well.

And, of course, I will be wrong again. The next time could come on July 20, when Keith Thurman faces Manny Pacquiao.

A ubiquitous videographer recently asked me THE question in regard to Thurman-Pacquiao. I responded, “I fear for Pacquiao” and then elaborated. He said, in so many words, “You’re in the minority. Almost everyone I’m interviewing is picking Pacquiao.” I said with great arrogance: “It’s not going to happen.”

Think I’m out on a limb now?

I have stated the process I use to pick a winner a number of times. I think back to the moment I hear a matchup is a realistic possibility or formally announced and go with my gut reaction. If you wait, if you take in an endless stream of opinions on how a fight will go, your thoughts will get muddled and you’re more likely to make a mistake.

The moment I realized that Thurman would actually fight Pacquiao, I thought, “Not a good matchup for a 40-year-old Pacquiao. Thurman can’t match Pacquiao in terms of natural talent but he’s too athletic, too quick and probably too big for this version of the Filipino star.” I stick with that assessment.

Pacquiao looked good against a badly faded Lucas Matthysse and Adrien Broner, who hasn’t been a particularly good fighter since he was a lightweight. In my opinion, there’s a big difference between those opponents and Thurman, a legitimate, 30-year-old 147-pounder with a great deal of talent and the advantages I mentioned earlier. 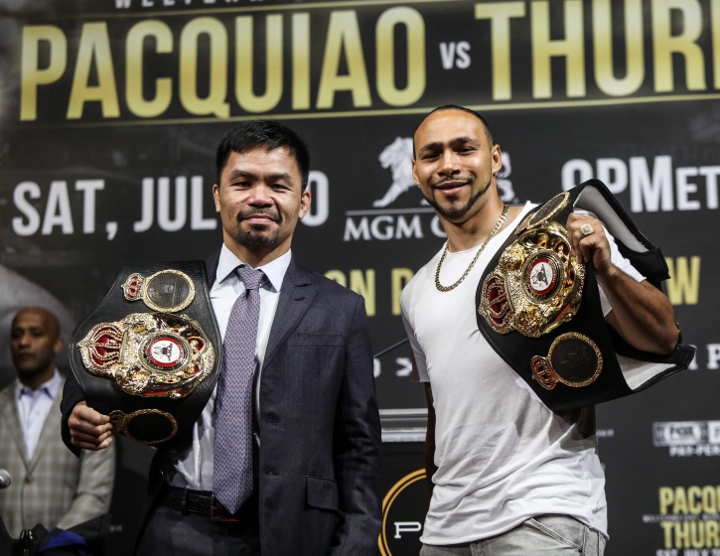 I hate to use these words, but I see no realistic way Pacquiao can win the welterweight title fight. (Yes, I’m asking for trouble.)

The buzz on the street is that Pacquiao is looking terrific in the early stages of his training, as if he has magically turned back the clock and become the Pacquiao who knocked out Oscar De La Hoya, Ricky Hatton and Miguel Cotto is succession a decade ago.

And somehow, word has it, the punching power is back, which doesn’t bode well for Thurman. This even though Pacquiao’s knockout of the all-but-helpless Matthysse last year was his first stoppage since that Cotto KO – in 2009.

Some of the chatter makes sense, which is why it resonates (and sometimes confuses). Thurman didn’t look great against Josesito Lopez in his first fight in almost two years after elbow and hand injuries. Some see that as a red flag, one that might mean he’s no longer the fighter who beat Shawn Porter and Danny Garcia.

That’s possible. Another possibility is that Thurman was rusty after the layoff. And I’ve heard from reliable sources that Lopez, a veteran, was well prepared for that fight. It shouldn’t be shocking that he provided some resistance.

The point is that we hear a lot of things between the announcement of the fight and the moment the fighters step through the ropes. It’s difficult to determine what’s true and what’s false or exaggerated and what it all means. I don’t ignore this data but I stick with my initial assessment unless a game-changer emerges.

One example might be whispers that a fighter is battling too hard to make weight. I might change my opinion in light of something like that or another potentially important factor. Otherwise I stand pat and try not to worry about whether I’m right or wrong.

Naturally, I want to be right and I am more often than not. I believe I have a decent feel for these things after almost three decades covering the sport for newspapers and websites. But the bottom line is this: Predications are nothing more than educated guesses. And sometimes you guess wrong.

If Pacquiao loses to Thurman, I won’t gloat. And if wins, I won’t run and hide. It’s the nature of the beast.

The fight would just ba like pacman vs bradley 1.. With thurman winning becoz of the judges! LOL...

[QUOTE=MEXfistology;19852066]Michael Rosenthal, just stop watching boxing, you don't know shtt about it, you don't understand what you're watching[/QUOTE] Same puto who said that GODnelo is not the best fighter right now & that he is just a good boxer not…

Add this to your countless plates of crow.

[QUOTE=Oregonian;19853202]“Thurman, a legitimate, 30-year-old 147-pounder with a great deal of talent and advantages” — that’s the only line we need to keep in mind. PAC has made a great name for himself fighting BUMS like Brandon Rios, Broner, MATHYSSE (all…

“Thurman, a legitimate, 30-year-old 147-pounder with a great deal of talent and advantages” — that’s the only line we need to keep in mind. PAC has made a great name for himself fighting BUMS like Brandon Rios, Broner, MATHYSSE (all…