On Saturday night, Jaime Munguia made a move his body sorely needed for him to make as the former world champion moved up to 160 pounds. After years of sitting in saunas and hot baths for hours the morning of weigh-ins and vigorous cardio workouts late into fight weeks, Munguia was finally able to step into the ring with a full tank at the Alamodome in San Antonio.

Munguia stopped Spike O’Sullivan in the 11th round of his middleweight debut, starting a new chapter for a fighter whose forthcoming maneuvers may be among the most interesting to ponder and debate in the sport at the moment.

The 23-year old did indeed pass his first test, but he didn’t completely ace it. O’Sullivan was sold as a credible middleweight opponent, but not a serious threat to his opponent’s undefeated record. Munguia himself predicted a fourth-round knockout prior to the bout, and while he did eventually get the stoppage, he also ate some heavy shots, and might have even been wobbled at one point.

The eating of shots is nothing new for Munguia. Part of why he’s been so exciting thus far in his young career has been his propensity to take punches, and part of why he’s been successful has been his ability to absorb them. As a towering and menacing presence at 154, his size and youthful punch output enabled him to mostly ignore the blows he’s taken, march forward and return heavier fire. Opponents have been able to back Munguia up in the past—Takeshi Inoue with his roadrunner pace left him no choice—but O’Sullivan was able to make him off the back foot for large portions of the bout not because he sold out wholesale in order to apply pressure, but because he wasn’t overwhelmed by Munguia’s pure stature as a true middleweight himself.

Munguia is in the rare position of being an undefeated former world champion (having relinquished his title at 154) who may be more in need of improvement than he is of a greater challenge. In the past three years, Munguia has had three different men as his lead trainer. This isn’t because Munguia is some brat who can’t handle authority—it’s because it’s agreed upon amongst everyone involved that it’s best that he make some adjustments before going after elite opposition.

Robert Alcazar deliberately tried to improve Munguia’s defense, but what materialized was a fighter taking periodic breaks to bounce on his toes and show he’s a boxer before reverting to what he knew best. More recently, Erik Morales came into the picture, where he remains today. Morales has rejected the idea of trying to turn Munguia into a rangy boxer and instead has worked with his charge’s natural instinct to stay in front of his opponent and has focused mostly on ensuring he moves his head before and after he throws combinations. Munguia did show vastly increased head movement against O’Sullivan, but did get caught pulling straight back, and in between shots (mainly a consequence of throwing a lot of punches) on occasion.

As a man who has held a world title and never lost it, there will be pressure on Munguia from fans and pundits to face elite opposition immediately. It’s an understandable reflex, especially for those spending money to watch fights, to want to see him in the toughest fights possible and not in instructional outings against modest opposition. And there may be some logic behind tossing Munguia in against the elite immediately. Fighters who fight the way Munguia does typically don’t have a long shelf life, and those who get hit as hard as Munguia did by O’Sullivan are bound to go down at some point, especially against more talented and bigger punchers than Spike. 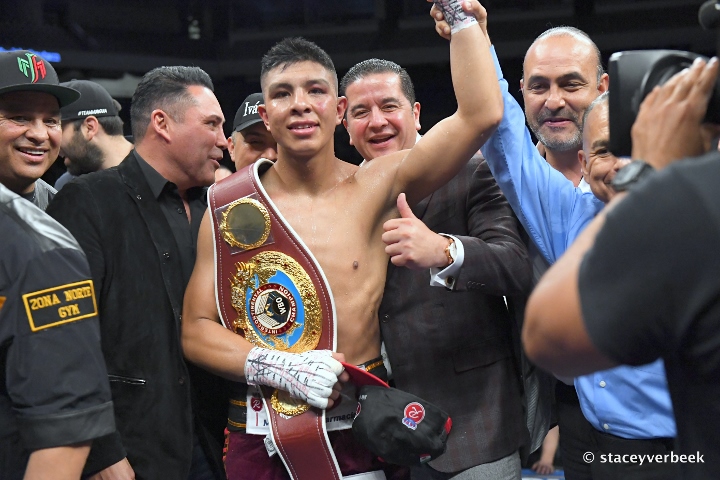 But even the most reckless of fighters tend to last past 23. Promoters and managers ultimately want to see their fighters reach their peak potential in terms of both their talent and their ability to draw money. Oftentimes, fighters are never able to achieve both, because as they pass the prospect stage of their careers, decisions are often wagers against either improvement or profitability. With Munguia, Golden Boy has to decide if additional “tune-up” fights against fighters above O’Sullivan’s level would in fact improve Munguia’s chances against the Canelos, GGGs and Charlos of the world, or whether they’re merely expensive risks.

Could Munguia make the same mistakes he did against Spike against a better fighter? Could more ring experience against decent opposition help him correct those errors without getting him beat?

For all the focus on his flaws, Munguia still obviously has a lot of strengths, or he wouldn’t be in this position at all. In his middleweight debut, he still would have been in the neighborhood of 900 punches over 12 rounds. As a big, busy 160-pounder who can take a punch, it would be understandable if one thought a fine-tuned version of Munguia in a year’s time could potentially pose problems for an aging version of Golovkin, for example.

Will the marketplace insist that Munguia takes a step up such as that one before he has time to improve? Does Golden Boy feel as though it’s even necessary to cave in to those demands, knowing that Munguia has sold a good number of tickets even against O’Sullivan and Patrick Allotey?

At 23, Munguia would in a perfect world be afforded the ability to be a 23-year-old first and a former champion second if he wants, but the boxing world is an imperfect one, and it might have other plans.