What if Andre Ward Unretired To Fight Canelo, Golovkin at 168?

What would happen if Andre Ward unretired after 16 months to face Canelo Alvarez and Gennady Golovkin at 168-pounds following back-to-back 175-pound championship victories over Sergey Kovalev, the last a demoralizing eighth-round stoppage in June 2017?

Could either the 28-year-old Alvarez (50-1-2, 34 KOs) or the 36-year-old Golovkin (38-1-1, 34 KOs) beat the Ward (32-0, 16 KOs) who crushed and folded previously unbeaten “Krusher” Kovalev with a debilitating body attack, or, that which thrice dropped then-175-pound southpaw champion Chad Dawson during a 168-pound title defense and  a 10th-round TKO representing the loser’s first career stoppage loss in September 2012?

Or could “Canelo” or “Triple-G” withstand the “SOG” whose unanimous decisions handled Denmark’s Mikkel Kessler and England’s Carl Froch, the former in November of 2009 and the latter in December 2011 for the RING, WBA and WBC belts and Showtime’s Super Six World Boxing Classic crown? 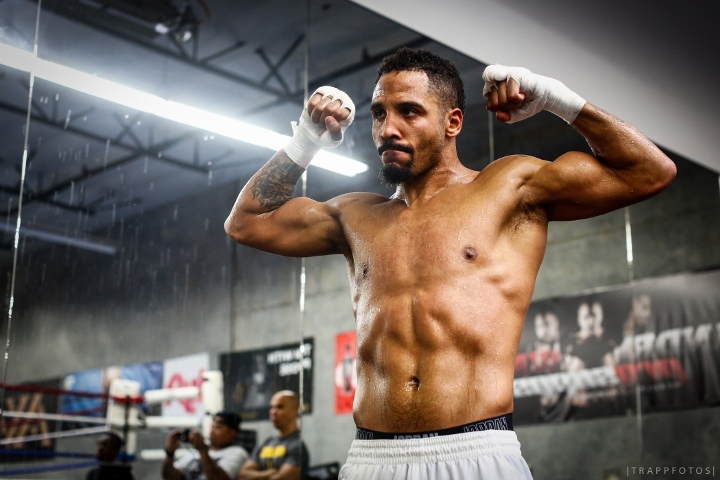 “I think when you look at both of those fighters when you get to the mid-rounds, where Alvarez and Golovkin kind of get stuck on stamina issues with both of them, I think Andre definitely has a 100 percent chance of winning a decisive decision with the possibility of stopping them,” said Hunter of Ward, a 34-year-old 2004 Olympic gold medalist.

“Andre would have pulled away and made it difficult for either of them to come back or to get a second wind. Each of them definitely had mid-fight stamina issues. I think they would be highly-competitive fights, but I just believe Andre would create a hill for them to have to climb at a rapid pace, that they wouldn’t be able to do it, and that he would have decisively won those fights.”

A 2004 Olympic silver medalist from Kazakhstan, Golovkin is 1-1-1 in his past three bouts, having won a disputed unanimous decision over Daniel Jacobs (35-2, 29 KOs) in March 2017 that ended “GGG’s” 23-fight, nine-year stoppage streak, and lost his IBO, WBC and “super” WBA 160-pound titles by split-decision to Alvarez last month in a rematch of their draw from September 2017.

Alvarez has signed a $365 million multi-fight deal with the streaming service DAZN and will pursue a third crown in as many divisions on December 15 against 168-pound Rocky Fielding, but retains his middleweight championships.

Hunter has declared Ward "comfortably and definitely retired," although Ward at one point expressed optimism toward the potential for facing Golovkin during a January 2015 interview with RingTV.com.

At the time, Golovkin was the WBA’s middleweight titleholder at 28-0 with 25 knockouts in advance of scoring his 16th consecutive stoppage victory by three-knockdown, seventh-round TKO in February 2015.

“Hey, when that fight [Golovkin] happens, it's going to be a great fight for boxing,” said Ward, who was Ring Magazine’s No. 2-rated fighter, pound-for-pound, behind The Ring’s 147- and 154-pound champion Floyd Mayweather. Jr.

“A lot of people say that he's gotten a lot of unnecessary hype, but I've got a lot of respect for Gennady Golovkin. The thing is that against the guys that he's fighting, he's doing the things that he's supposed to do against those guys. I mean, he's getting them out of there."

Hunter was prepared for Golovkin, but the clash never materialized.

“I actually had a game plan for Golovkin when it looked as if it my possibly happen, and it’s funny that as I watched their last two fights, that game plan would have unfolded. I always felt that Golovkin had mid-fight stamina issues,” said Hunter.

“Of course, 168 was Andre’s natural weight class and where he excelled, and I see him being just a little bit too skillful and too athletic for both Golovkin and Alvarez. Based on what I’ve seen I think Andre would have a good chance of stopping them.”

He'll be avoided by Canelo and Kovalev woudn't be able to make the wight.

Ward and Canelo are exactly who you guys thought Golovkin was

Cannot see Ward making 168 anymore. He by his own admission said making weight was killing him so he moved up. If he did make 168 more power to him but it's highly unlikely.

If Ward comes out of retirement, Canelo will instantly vacate and go back to Caneloweight of 155lbs. Mark my words.

[QUOTE=daggum;19265736]another misinformed person. propaganda is really effective unfortunately when you look at wards offer and see that it was a 2 fight deal that was contingent on him preemptively delaying his fight against canelo/cotto you could see it was nothing…