Srisaket Sor Rungvisai and Juan Francisco Estrada are ready to run it back.

As was the case the first time they met 14 months ago, both boxers easily made weight ahead of their World super flyweight championship, which takes place Friday evening at The Forum in Inglewood, Calif.

Sor Rungvisai checked in at a ripped and ready 114.2 pounds, nearly a full pound under the divisional limit and more than one-half pound lighter than his weight in their first fight. Estrada was slightly heavier than the defending champion as he weighed a rock-solid 114.6 pounds, having previously weighed in at the 115-mark last February. 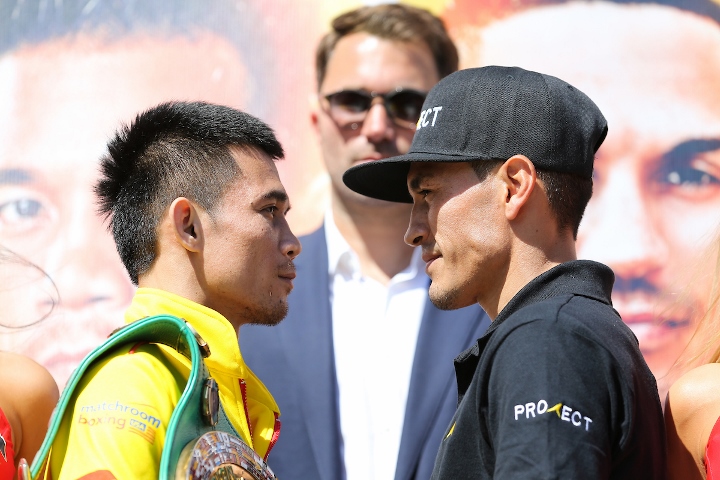 Their bout will air live on DAZN, taking place at the very same site as their epic slugfest last February. Sor Rungvisai prevailed in their first meet, taking a 12-round majority decision to become World (lineal) champion in their HBO-televised headliner.

Sor Rungvisai (47-4-1, 41KOs) returns to the area for the first time since his aforementioned win over Estrada, which trailed his debut in this corner of the world. The hard-hitting southpaw from Thailand made a splash in his Cali debut, scoring a sizzling 4th round knockout of former pound-for-pound king Roman Gonzalez in their Sept. ’17 rematch, six months after scoring a controversial 12-round decision to begin his current title reign.

Friday will mark the fifth defense of Sor Rungvisai’s WBC title and his third as a lineal champion, with that reign established in his first win over Estrada. His last two defenses have taken place at home in Thailand, including a 12-round win over Iran Diaz last October.

Roman (26-2-1, 10KOs) weighed 121.2 pounds for the fourth defense of the title he won on the road in a Sept. ’17 knockout win over Shun Kubo in Japan. Friday’s contest marks his first in his Los Angeles home region as a defending titlist after having fought almost exclusively in California prior to his first title win.

Doheny (21-0, 15KOs), who weighed 121.8 pounds, also traveled to Japan for his title win, scoring an upset points win over Ryosuke Iwasa last October. The 32-year old southpaw from Australia by way of Ireland managed to squeeze in a last-minute title defense in a knockout win over Japan’s Ryohei Takahashi this past January at Madison Square Garden’s Hulu Theatre in New York City to set up the unification contest.