However much longer Kosei Tanaka chooses to remain at flyweight, he can officially look forward to at least one more title defense.

The unbeaten three-division and reigning 112-pound titlist made weight for Saturday’s mandatory title fight versus Puerto Rico’s Jonathan ‘Bomba’ Gonzalez. Both boxers came in right at the 112-pound limit for the bout, which takes place at Takeda Teva Ocean Arena in Tanaka’s hometown of Nagoya, Japan.

Tanaka (13-0, 7KOs) will attempt the second defense of the flyweight crown he claimed in this very venue 11 months ago. The former strawweight and junior flyweight titlist prevailed in a scorching 12-round win over Sho Kimura last September, which was rightly hailed by BoxingScene.com and several other outlets as the 2018 Fight of the Year. 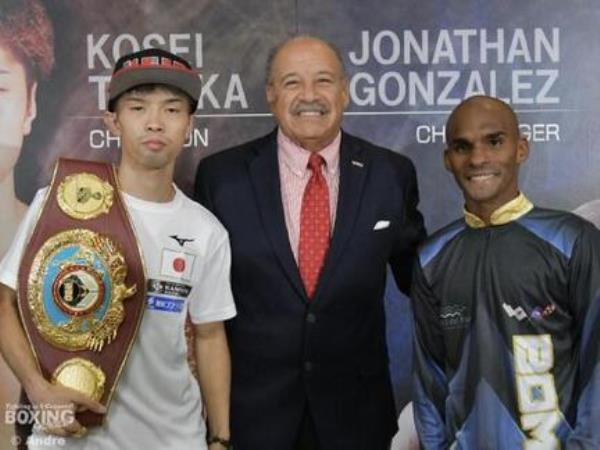 It also placed the 24-year old rising star in the record books. The three-division title heist in just just 12 pro bouts matched the record-establishing feat by Vasiliy Lomachenko just five months prior, although there remains room to potentially one-up the Ukrainian wunderkind.

Saturday’s bout versus Gonzalez (22-2-1, 13KOs) could be his last as a flyweight, as rumors have swirled of Tanaka eventually moving up in weight.

Before that plays out, both have significant business in front of them.

The bout will air live on CBC and TBS in Japan as well as WAPA TV in Puerto Rico. External markets can watch via livestream on RingTV.com, beginning at 2:00am ET/11:00pm PT with a scheduled 10-round flyweight bout between Tanaka stablemate Kento Hatakana (9-0, 9KOs) and Philippines’ Jaysever Abcede (19-8, 12KOs).