DALLAS – Moving away from downtown Dallas, where his scary car crash occurred, was an important part of Errol Spence Jr.’s recovery. (photo by Ryan Hafey)

The 30-year-old Spence purchased a ranch away from this huge Texas city. Spence spends plenty of quality time there with his girlfriend and three children, raises horses and cattle, and keeps himself from some of the trappings of fame and fortune that led to that frightening night when the unbeaten IBF and WBC welterweight champion almost lost it all.

Though physically removed from that time and place in his life, for Spence to metaphorically move beyond what occurred in downtown Dallas in October 2019, we all need to see Spence perform the way he boxed before he was ejected from a Ferrari that flipped multiple times and altered the course of his career.

More than anything, that’s what Spence’s 12-round, 147-pound title fight with Danny Garcia on Saturday night is all about. No matter what anyone says, Spence included, we can’t know “The Truth” about Errol Spence Jr. until we witness how he looks against Garcia in what would’ve been one of his most difficult fights had the accident not happened.

Even Spence realizes seeing is believing. The DeSoto, Texas, native fully understands people’s doubts about whether he can regain his pound-for-pound form following such a physically painful and emotionally exhausting experience.

“I mean, the only thing I’m gonna prove [is] that, you know, I’m still the same,” Spence stated during a press conference Wednesday at the Renaissance Dallas hotel. “And I’m a realist. I’m realistic. I know people, you know, have a lot of questions. Am I still the same? Am I a shell of myself? And if I would’ve looked at the accident and somebody [else] would’ve had [it], I woulda said the same thing, too. And I woulda had questions, too. So, you know, that’s basically the questions that need to be answered.

“And I felt like that wouldn’t have been answered if I woulda fought, you know, lighter competition. So, I feel like, you know, a lot of stuff will be answered come December 5th, that people have, [people] that haven’t been in the gym need to see. So, you know, I just expect for myself to be a hundred-percent on point, sharp, and, you know, just accurate with my shots.” 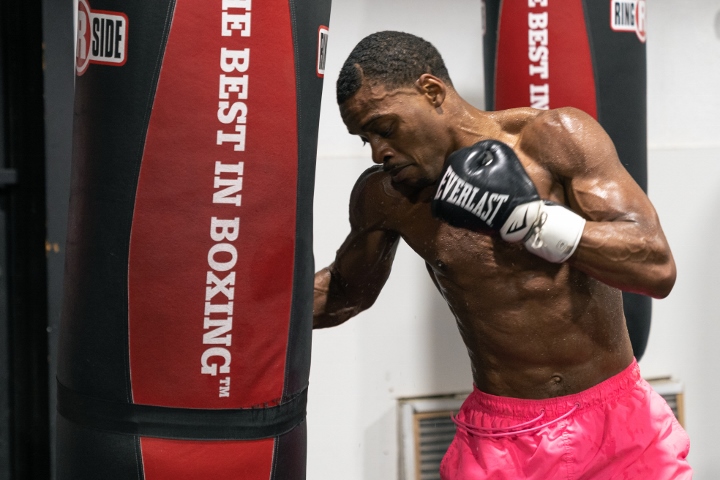 The 30-year-old Spence (26-0, 21 KOs) admits there were moments early in his comeback when he felt like quitting boxing. His family, most notably his 5-year-old and 3-year-old daughters, motivated him to keep pushing forward after suffering cuts to his face and body and damage to his teeth in that awful accident.

The skilled, strong southpaw is completely convinced he has returned to the elite level. That’s why Spence pushed to fight an opponent as dangerous as Garcia (36-2, 21 KOs) at AT&T Stadium in Arlington, Texas.

Spence’s longtime trainer, Derrick James, was sure Spence was the same formidable fighter as before the accident once James watched him spar. That didn’t happen until September 28, when Spence sparred 10 rounds at James’ gym, five rounds apiece against two fighters.

“When he started sparring, that’s when I knew,” James told BoxingScene.com. “Deep into the training camp, when he started sparring, that’s when I said, ‘Man, OK.’ Everything was going as scheduled, but people can shadowbox and hit the mitts and look phenomenal. It’s routine. They know how to do that. But for him to be able to come into the ring and be able to box and spar, and see his reaction time, that’s when I knew. You’re kind of waiting for whatever, but then when he gets hit, you say, ‘OK, he’s good to go.’ ”

James knows Errol Spence Jr. the boxer better than anyone. Their confidence aside, there is a distinct difference between boxing sparring partners while wearing headgear and gloves with more padding, and facing an imposing opponent like Garcia.

And if Spence struggled during camp or didn’t resemble the ferocious fighter fans came to appreciate prior to his accident, they’re obviously not going to tell us before he battles Garcia.

Spence’s performance against Garcia – under those bright lights, without headgear, while wearing eight-ounce gloves – is the evidence required to determine if this is the same guy we want to finally fight Terence Crawford in 2021.

This is a moment of truth of sorts for Garcia as well.

The 32-year-old Philadelphia native has beaten 10 former world champions and made plenty of money during his 13-year pro career.

His upset of hard-hitting Lucas Matthysse seven years ago gained Garcia a lot of credibility. He has lost only a 12-round split decision to Keith Thurman and a 12-round unanimous decision to Shawn Porter in 38 professional fights.

Spence still is an approximate 4-1 favorite against Garcia, despite legitimate questions about what’s left of Spence.

If Garcia upsets him, cynics inevitably will say Spence wasn’t the same fighter after his accident. Regardless, Garcia will have beaten one of the best welterweights of this era if the underappreciated underdog wins in their FOX Sports Pay-Per-View main event ($74.99; 9 p.m. EST; 6 p.m. PST).

Angel Garcia, Danny’s provocative father and trainer, has predicted his son will knock out Spence in the seventh round. The Garcias hope Spence approaches Danny Garcia as recklessly as he did Porter at times in their 12-round welterweight title unification fight in September 2019 at Staples Center in Los Angeles.

If Spence fights Garcia similarly, they feel it’ll provide Danny Garcia with exploitable opportunities to land a left hook or right hand that’ll hurt or even knock out Spence. Like Garcia, Spence’s chin has been one of his most reliable assets throughout his ascent to stardom.

Spence cannot wait for the chance to prove Saturday night that his chin and everything else about him is intact.

“It’ll definitely be gratifying, answering those questions and all the naysayers that are so sure that I won’t be the same,” Spence told BoxingScene.com. “It definitely motivates me to keep grinding, to focus and to keep training hard and stay on my game and stay on my grind because I know that people are waiting on me to say, ‘I told you so. I told you I was right,’ and this and that. So, you know, I’m anxious just to prove a lot of people wrong.”

He doesn’t expect us to take his word for it. Even he realizes we can’t know “The Truth” about Errol Spence Jr. until we witness how he looks against Garcia.

[QUOTE=Oregonian;20932359]————— I hope you watched the Spence-Garcia fight. If the fight can be made, do you think Bud beats Spence?[/QUOTE] No am going with Spence not just because am a fan of his but because he is now living the…

[QUOTE=Ray*;20930293]Agreed re Mayweather, hence why I have heated discussions with anyone in that regards. Bud is not Mayweather and no one has ever claimed he is. Bud might be the number P4P best at the moment but the situation isn’t…

[QUOTE=James Hunt;20926852]Considering he's gonna continue to duck Bud, his condition is absolutely irrelevant, just like this fight. If there was anything wrong with him, they wouldn't be using this car crash to promote it.[/QUOTE] Doesn’t look like anything was wrong…

[QUOTE=Ray*;20930293]Agreed re Mayweather, hence why I have heated discussions with anyone in that regards. Bud is not Mayweather and no one has ever claimed he is. Bud might be the number P4P best at the moment but the situation isn’t…