Ronald ‘Winky’ Wright never managed to put a major middleweight title around his waist in real life, but continues to tear through boxing legends on the gaming circuit.

The tone was set early by Wright, a masterful southpaw who dared to go toe to toe with Monzon, considered by many historians as the greatest boxer to ever come out of Argentina. The long-reigning middleweight king is often regarded as the best middleweight in history, as reflected in his seven-year title reign, retiring as champ and with a 71-fight win streak.

Boxing on the virtual circuit has proven far more challenging for Monzon, who two days after struggling with Jake LaMotta had fallen into an early hole with Wright. Left hand shots consistently scored for Wright, who swept rounds one and two on all three scorecards. 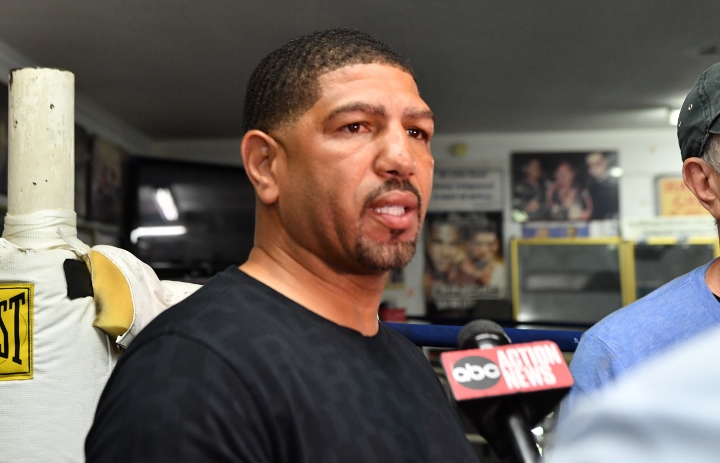 Monzon closed the gap in rounds three and four, managing to test Wright’s infighting skills as his right hand began to find a home. Wright was forced to deal with a deep cut along his right cheek bone after three rounds, though the wound never became a factor in the fight.

A virtually even contest through four rounds proved just as tightly contested in a round five that saw both fighters badly stunned. Wright was rocked early in the round, though his granite chin was able to sufficiently absorb the telling shot. Monzon gained a false sense of confidence from the sequence, as he was nearly out on his feet later in the frame.

From there, the bout would soon transition to a rout. Wright took the lead in round five and never looked back. Monzon had his foe well within his desired range but was consistently beaten to the punch. Right hands would land for Monzon, but his left hook couldn’t find the target. Wright’s left hands did, as he finished off the first half of the fight with a two-point lead on all three scorecards.

Wright carried the momentum into the second half of the fight and in the biggest way possible Monzon tried in vain to find to connect with a game changing punch, but instead got caught himself. Wright slammed home a jab, right hook combination to floor Monzon for the first time in the night. However close was the fight on the scorecards to that point.

Monzon found himself on the canvas three more in round eight, all coming courtesy of left hands over the top. The Argentine legend barely beat the count on the second knockdown, but was in bad shape and there for the taking. Wright closed the show in style, connecting with a left hand to the body to put Monzon down for good.

Wright was ahead 68-64 on all three scorecards at the time of the stoppage.

After taking out arguably the greatest middleweight in boxing history, Wright has another tall task ahead. This one comes against the man considered by many to be pound-for-pound the best ever, as he will face ‘Sugar’ Ray Robinson who also scored two knockout wins to storm into the tournament finale.

Their clash will stream live on Sunday afternoon, with the winner to claim status as the eWBSS Middleweight Legends Tournament champion.

As has been the case with all tournament bouts, Saturday’s semifinal streamed live on WBSS’s social media channel.

Winky Wright in this game learn how to sit in his punches to stop Carlos Monzon. Impossible, but is a game and one can expect everything. :boxing:

Did someone put a feminist in charge maybe??

[QUOTE=too_much;20497582]Tournament lost all credibility.[/QUOTE] Only way to restore credibility is to have Winky tear his e-chilles tendon and bring in last minute replacement - Bernard "Alien Executioner" Hopkins. The only thing this tournament ever had to do was settle the…

[QUOTE=Greenfield02;20496681]This cracks me up, Winky had absolutely no power, nice defense, he kept his hands up very well, sometimes to well, lacked in throwing punches sometimes, but overall very solid and could be boring at times.[B] I take Monzon all…