Joe Frazier proved as dangerous on the e-boxing circuit as he was in real life.

The Hall of Fame former heavyweight champion recovered from a knockdown to score four of his own in flattening England’s Lennox Lewis in seven rounds Tuesday afternoon at Royal London Theatre in London, England.

Frazier dropped Lewis in rounds one, three and twice in round seven, the latter producing the end of the fight at 1:28 of round seven of their e-World Boxing Super Series (WBSS) Heavyweight Legends Tournament quarterfinal matchup. 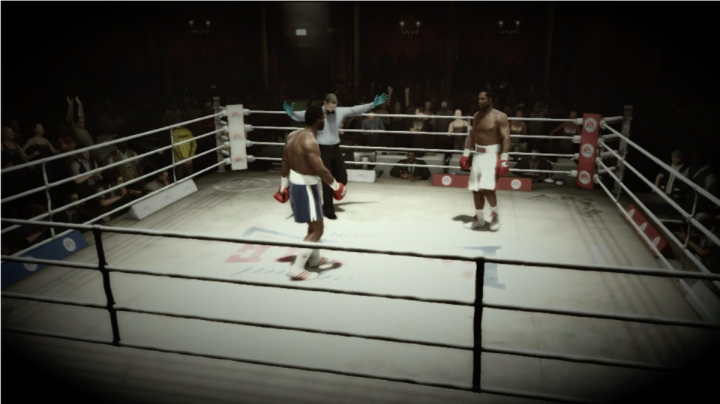 Lewis sought to put his seven-inch height and 11-inch reach advantage to good use, doubling up on his jab and throwing right hands from the outside. Frazier’s cross-armed defense—popularized by the great Archie Moore before him—served as a deterrent, picking off much of the incoming and also leaving him in position to counter Lewis. A looping right hand on the inside connected on Lewis’ chin with less than a minute to go in the round.

Momentum quickly swung in the direction of the local favorite, as Lewis fought purposeful at the start of round two. Whether along the ropes or at ring center, Lewis was able to control the distance, slipping shots on the inside and coming back with right hands over the top of Frazier’s defense. An uppercut by Frazier had Lewis briefly dazed with roughly 30 seconds to go in the frame, but with the 1988 Olympic Gold medalist and three-time heavyweight titlist recovering well enough to avoid further damage.

Frazier stormed out the gate to begin round three, connecting with his left hook. Lewis rode out the early storm, settling down and landing combinations. Frazier never relented, backing Lewis into the ropes and scoring with left hooks upstairs and right hands to the body. Lewis was able to move out of harm’s way, dictating the pace as he was able to re-establish his lengthy jab which frustrated the Philadelphia heavyweight.

Lewis had Frazier in serious trouble and eventually on the canvas in round four. The two-time lineal heavyweight king continued to control the distance, penetrating Frazier’s tight guard and landing enough jabs and right hands to push back his compact foe. A left uppercut made its way inside, freeing up Frazier’s chin for Lewis to slam home a right hand to score his first knockdown of the night. Frazier beat the count but fatigue continued to play a factor.

Sensing his opponent’s ability to turn the tide with a single shot, Lewis fought with caution in round five. The tactic proved wise, as Frazier found his second win and claimed momentum courtesy of a right uppercut which caught Lewis’ attention.

A right hand by Frazier would catch a lot more than that, sending Lewis to the canvas early in round six. Lewis did his best to punch his way back into the fight, but a counter left hook by Frazier reminded him of the danger in getting caught up in exchanges. Frazier pushed past Lewis’ long right hand, catching the Brit with left hooks and uppercuts as he continued to push him around the ring.

The second half of the fight marked the beginning of the end for Lewis, who was floored twice in round seven. A long left uppercut from Frazier had Lewis frozen in place before crumbling to the canvas in the first minute of the frame. Somehow, Lewis made it to his feet at the count of nine, only to get clipped with a left ‘hooker-cut’ which put him flat on the back where he remained for the full ten-count.

Frazier was ahead 56-55 on all three scorecards at the time of the stoppage, with the lead only threatening to grow even if Lewis survived the two-knockdown 7th round. With the win, he will now get to meet historic longtime rival Muhammad Ali in a fourth fight.

Ali resurrected his own boxing career following a 5th round stoppage of four-time heavyweight titlist and two-time lineal champion Evander Holyfield in the opening leg of the quarterfinal round on Monday. The win advanced the only three-time lineal heavyweight champion in boxing history to the semifinal round, where he will meet Frazier on Friday.

The pairing will come more than 49 years after their iconic first fight in March 1971, marking Frazier’s only win in their historic trilogy. Frazier scored a 15-round decision win at New York City’s Madison Square Garden, which hosted their less memorable January 1974 rematch in which Ali claimed a 12-round decision.

By that point, Frazier—who claimed World heavyweight champion status through his win over Ali (after having unified the WBC and WBA titles during Ali’s three-year political exile from the sport)—was dethroned by then-unbeaten George Foreman, who will face England’s David Haye on Thursday.

The third fight between Ali and Frazier-which took place in October 1975 in Manila, Philippines—is considered among the greatest heavyweight championship fights in history, and among the sport’s best-ever fights in general. The famed ‘Thrilla In Manila’ saw Ali barely outlast his hated rival, as Frazier was ordered to remain on his stool prior to the start of the 15th and final round.

The winner of Friday’s semifinal pairing will advance to the eWBSS tournament final on Sunday, March 29.

Tuesday’s bout streamed live on WBSS’ social media channels, as will the tournament as a whole.

[QUOTE=Sid-Knee;20482697]Lennox was focussed on Bowe and Holyfield back then and was frustrated in having to fight someone like McCall. Any boxing fan knows you need to have proper focus when fighting anyone. But it's understandable when watching back then why…

[QUOTE=NachoMan;20481075]They prolly said something similar before the Rahman and McCall fights. Also, history regards Joe Frazier as quite a bit more than a one-armed bar room brawler. Undisputed World Champ, Olympic Gold Medalist... You are assuredly the ONLY person to…

Lewis got knocked out by Hasim Rahman, and everyone's all worked up that Joe Frazier may have been able to do it? Frazier beat MUHAMMAD ALI.

It's random who wins, me and my kids used to put computer v computer and watch who wins, it's very random, we did Royal Rumbles on WWE too and tournaments on WWE and just watched the computer. If we did…