George Foreman did his part to lend credence to the claim that everything’s bigger in Texas.

Both fighters hit the deck in the most competitive bout of the quarterfinal round. Foreman was floored in round four, returning the favor with two knockdowns of his own—the latter of the two putting Haye down for the full count late in round five. 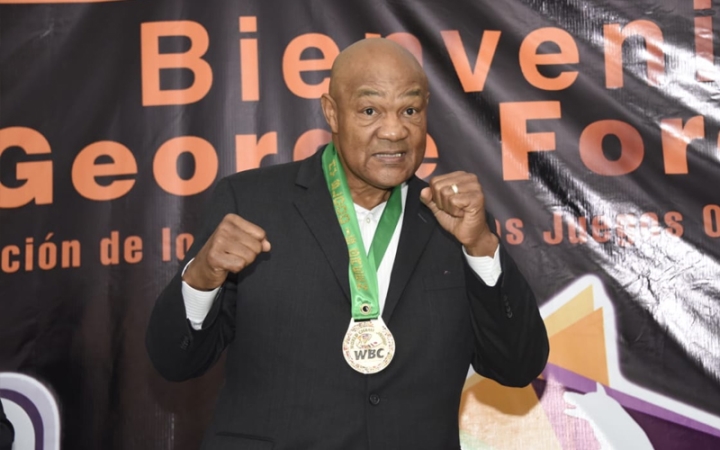 Foreman was able to neutralize Haye’s advantages in hand speed and natural athleticism, wading through the incoming to land the more telling blows. A right hand shot by the former two-time World heavyweight king from Marshall, Texas had Haye briefly stunned with 30 seconds to go, but the Brit was able to ride out the storm despite catching another right hand and left hook before the bell.

Haye recuperated well enough to take the initiative in round two, never to the point of leaving himself vulnerable to heavy return fire. The former World cruiserweight king and heavyweight title claimant pumped his jab and followed with right hands, while immediately covering up the moment Foreman sought to counter.

A similar strategy was sought by the smaller and quicker heavyweight in round three, but Foreman quickly adapted. A right hand by the legendary Hall of Famer had Haye on wobbly legs, though managing to remain upright. Still, concern was expressed in Haye’s corner as he was urged to turn the tide.

The adjustment reaped immediate dividends. Haye was catching fire while coming in, but worth the risk as he slammed home a right hand which sent Foreman to the canvas midway through round four. Foreman beat the count and managed to score with a right uppercut once action resumed but continued to struggle to neutralize Haye’s jab. A right hand by Foreman rocked Haye in the closing seconds of the round but not enough to erase the two-point advantage Haye would gain from the knockdown earlier in the round.

Foreman came out for round five with a sense of urgency, missing with earlier shots but proving a wise investment for the opening he sought. Haye hit the deck twice in the round, floored by right hands on both occasions. The latter of the two put him down and out for the night, unable to beat the count in the closing seconds of round five.

Haye was ahead 38-37 on all three scorecards at the time of the stoppage.

Foreman advances to the semifinals, where he will face Mike Tyson in a pairing of two of the greatest knockout artists in heavyweight history. Their bout will take place Saturday, at which point the other side of the bracket will have been decided as Muhammad Ali and Joe Frazier collide for a fourth time in Friday’s semifinal bout.

The winners of Foreman-Tyson and Ali-Frazier IV will meet in the eWBSS tournament final on Sunday, March 29.

[QUOTE=Oregonian;20483884]——— I am not comparing Haye’s skills or resiliency to Ali. You misread my post. I am just saying Ali was given the same chance Haye is being given. Everyone said he was going to be destroyed by Foreman. Haye…

Again, what the f[I]uc[/I]k is the deal? Haye competing well against George Foreman, MMM... :poke:

[QUOTE=tokon;20482992]You're rating Haye as highly as Ali? Really?![/QUOTE] ——— I am not comparing Haye’s skills or resiliency to Ali. You misread my post. I am just saying Ali was given the same chance Haye is being given. Everyone said he…

[QUOTE=NachoMan;20483069]What's truly silly is that you have managed to compare Ali and Haye somehow. Apart from height, what on earth do you feel was similar between Haye and Ali?!?[/QUOTE] —— I am not comparing Haye’s skills or resiliency to Ali.…