Scores were 115-112, 115-112 and 114-113 in favor of Monzon, who rose from a 9th round knockdown to prevail in the quarterfinal round of the eWBSS (World Boxing Super Series) Middleweight Legends tournament.

LaMotta negated Monzon’s natural size advantage, playing true to his ‘Bronx Bull’ nickname and pushing his way inside. Monzon—who reigned as the lineal middleweight king for seven years and retired as champ and with a 71-fight unbeaten streak—did his best to dent LaMotta’s historically iron chin. The Aregentine legend scored with right hands as his smaller foe charged within punching range but was also getting caught with uppercuts in return.

The same theme carried through the first quarter of the fight, with LaMotta forced to contend with a cut under his left eye after three rounds of furiously paced action. The Bronx-bred former middleweight king continued to throw caution to the wind, rushing forward in round four and enjoying success with his right hand. 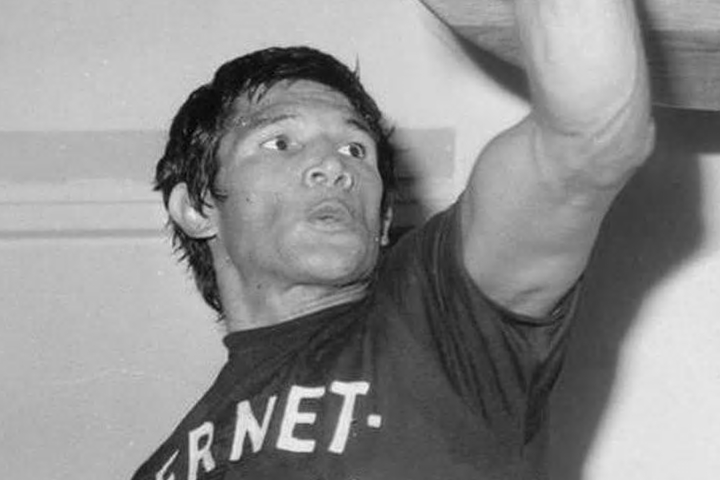 Monzon remained poised, continuing to land heavy shots but not wasting any energy. The trend continued in rounds five and six, with LaMotta unable to turn the tide no matter his tireless effort. Through six rounds, Monzon displayed to the world why he’s been long regarded as arguably the greatest middleweight in history.

Of course, that’s what this simulated tournament is here to provide, with the fights to be fought on the screen. LaMotta sent a healthy reminder in round seven, badly stunning Monzon midway through the frame. Monzon managed to weather the storm and give back plenty in return. It paved the way for a high volume round eight that saw both fighters have their say.

Monzon scored with a left to the body and right upstairs to begin round nine. LaMotta slipped a rare punch, coming back with a right hook to the body and a left uppercut on the inside. A right hand by LaMotta rocked Monzon, who barely remained upright. It wouldn’t last for long, as an overhand right sent him crashing to the canvas with roughly a minute to go in the round.

Blood continued to flow under LaMotta’s eye after nine, though soaring with confidence heading into the championship rounds. It wasn’t good enough for his corner, however, as the former middleweight king was instructed to “knock this motherf***er out!”

LaMotta tried his damnest to oblige, as he was relentless in his attack in round ten. Monzon wisely went on the defensive, both the slip the incoming and also preserve his energy. The tactic proved wise, as he was able to connect with a heavy right hand up top by the end of the frame.

There came a rare moment at the start of the 11th where both boxers fought from the outside. It didn’t last long, as Monzon launched a right hand only to leave his midsection open for a crushing left hook. A right uppercut by LaMotta had his foe badly stunned at the end of the round, but it was the steady stream of clean punching by Monzon in between those two moments which won him the frame and sealed the victory on the scorecards.

Both boxers were running on fumes in the 12th and final round, understandably so given the frenetic pace leading to that point. Monzon sought to make it a boxing match, his decision to box on the outside preserving a hard-fought, if not disputed victory as LaMotta was unable to land anything dramatic enough to take out of the hands of the judges.

Instead, it went to the cards—just the second bout to do so between the middleweight and heavyweight tournaments, and the first non-final to go the distance.

Monzon will go on to face Ronald ‘Winky’ Wright in the tournament semifinals on Saturday. On the other side of the bracket, ‘Sugar’ Ray Robinson and Marvelous Marvin Hagler collide on Friday.

The winners of each semifinal bout will advance to Sunday’s finale.

[QUOTE=Thunderstruck;20494630]Pretty sure he killed his wife.[/QUOTE] Ohhh that’s right. That’s what it was.

[QUOTE=MASTER OF you;20494703]the ice man carlos monzon is well known in boxing circles. I'm talking hardcore boxing fans. monzon is ranked by many as the greatest or second greatest middleweight of all time. he's certainly greater than hopkins. he ranks…

It’s very possible, Monzon was just a special fighter and so was Lamotta! I can see if they both fought 10x that it could be 5-5 or 6-4 going the other way!

[QUOTE=Oldskoolg;20494092]Just so the Hearnbots and Matchroom drunken hooligans know, these are two great boxers from earlier eras before Eddie Hearn came along.....I see by the lack of posts you lot have no idea who they are[/QUOTE] lmao. I can even…

[QUOTE=JcLazyX210;20494505]Monzon is not well known even in boxing circles. I know he wasn’t big in America during his peak. I also think he got in trouble beating on women or something. Idk But he’s definitely one of the greats !!!…