WBSS Fantasy Tournament: Ali To Face Liston in Semi-Final, Frazier is Out

Due to a growing global interest in the eWBSS, tournament No 1 seed Muhammad Ali will take on Sonny Liston at the new time of 7pm (GMT) on the @WBSuperSeries Facebook for a place in the final.

"We are very sorry to disappoint the fans of the eWBSS who were looking forward to Muhammad Ali vs Joe Frazier but due to unforeseen circumstances, we have to replace Smokin’ Joe with Sonny Liston – one of history’s toughest and most intimidating boxers who fought Ali twice in real-life. The fights between Ali and Liston were among the most anticipated and watched in sport's history. We cannot wait to see their eSport characters battle it out for a place in the final of the ‘eWBSS Heavyweight Legends’ tournament. See you on Facebook," stated the World Boxing Super Series team. 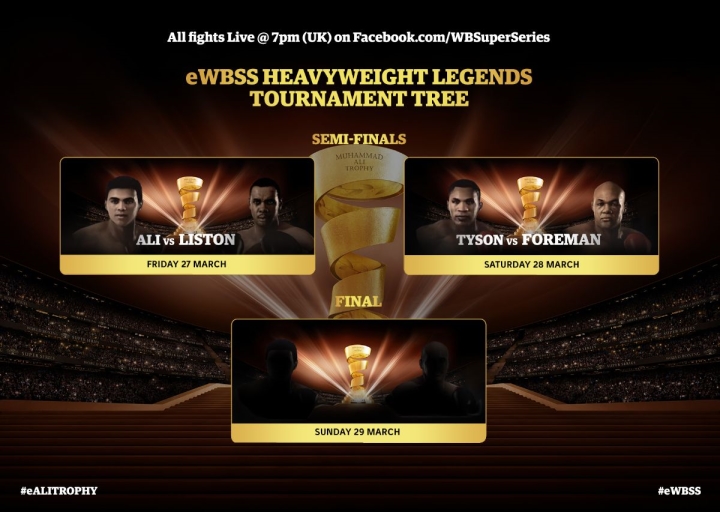 The tournament, simulated on EA Sports ‘Fight Night Champion’, is created by the real World Boxing Super Series to provide some much-needed relief and entertainment for fight fans around the world during these testing times.

[QUOTE=b morph;20485128]Drago for the win by KO. Lane doesn’t have the gas tank to last the whole fight. He would have to get Drago out early, plus Clubber has to survive the early onslaught from Drago. Clubber might catch Drago…

The article said due to growing global interest. Wtf? There’s global interest in this? And how does that mean they replace Joe with Sonny. That’s the reason they give?

[QUOTE=Idunnoshet;20483625]Should've replaced Frazier with Ivan Drago and Ali with Clubber Lane. That's a fantasy fight I been craving since Rocky 4. I mean. It's all for fun right guys ?[/QUOTE] Drago for the win by KO. Lane doesn’t have the…

Now things are getting interesting with pull out and all. LOL. :boxing:

We all know Ali is going to win..the trophy is named after him LOL