England’s Saunders (26-0, 12 KOs) was supposed to make a mandatory defense of the WBO middleweight title against Andrade that night. The Massachusetts State Athletic Commission denied his license application on Tuesday, however, because Saunders tested positive for oxilofrine, a banned stimulant, in a test administered August 30 by the Voluntary Anti-Doping Association.

“He voluntarily did it. We were ready to start the process, our internal procedure, to strip him.” 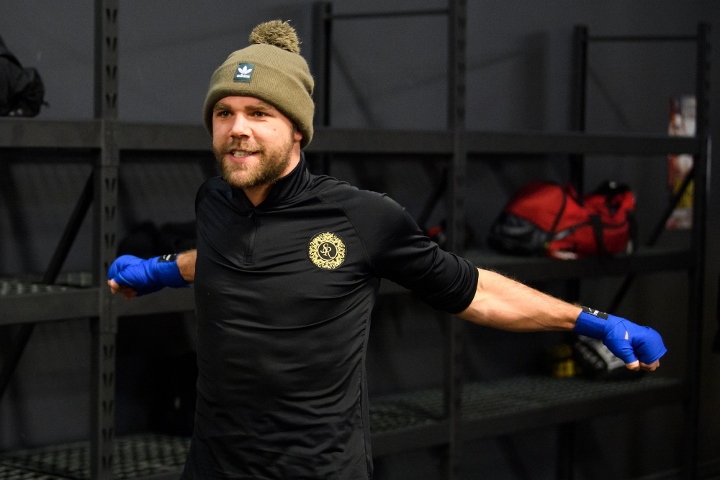 When asked why Saunders didn’t proceed with an appeal, Valcarcel said, “I don’t want to make any comments or give any opinions. But it’s a vacant title because he relinquished the title.”

Valcarcel added that Saunders “probably will be suspended for six months.” That suspension would prohibit him from appearing in the WBO’s rankings and earning a shot at the title he vacated during that time.

Frank Warren, Saunders’ promoter, revealed earlier Thursday that Saunders will appeal the Massachusetts commission’s decision all the way to the U.S. Supreme Court, if necessary. Warren contends Saunders should’ve been allowed to box against Andrade because Massachusetts is legally obligated to adhere to the World Anti-Doping Agency’s standards.

Oxilofrine is on VADA’s list of banned substances 365 days per year, yet only against WADA and UK Anti-Doping regulations on the day of a fight. Saunders, 29, won’t be disciplined by UK Anti-Doping, which subjects all British boxers to drug testing 365 days per year for the British Boxing Board of Control, and will be free to fight in the United Kingdom as soon as Warren can arrange another fight for him.

The Massachusetts commission denied Saunders’ license application because the former champion signed a contract to adhere to VADA’s stricter testing standards, as did Andrade.

Regardless, failing VADA’s test will cost Saunders’ side a package of $2.3 million for facing Andrade.

[QUOTE=factsarenice;19208013]Did they make it legal again, because I know the US Food and Drug Administration banned the sale of any products containing ephedra in 2004 and then again in 2007. I don't think it's legal in the US.[/QUOTE] WADA rules…

[QUOTE=Robbie Barrett;19186161]You think ephedrine is juicing? :rofl: WADA is the standard for drug testing in the Olympics and nearly all sports. They allow it out of competition, so obviously they don't see it as giving a big advantage. If all…

[QUOTE=Robbie Barrett;19186031]Not Massachusetts job to enforce others rules only their own. Under their rules Saunders did nothing wrong. He should have been given a license.[/QUOTE] Who's job is it to enforce the drug-testing stipulations that were agreed upon in the…

[QUOTE=j.razor;19186997]SMH....I hope your kidding cuz lemule is wack.[/QUOTE] Only guy besides Canelo and Triple G that I'm not sure about since Droid Saunders out is Charlo... He has a legit "puncher" chance with everyone else in the division... I know…

[QUOTE=j.razor;19187011][url]https://www.youtube.com/watch?v=192z_8KhF-M[/url][/QUOTE] So according to Conte what canelo was taking is like baby food this what Saunders was taking is like steak. NFL, NBA, every other major sport league has this drug is…