WBO Prez Erupts Over WBC "Handing Out" Their "Palooka" Belts

On Tuesday, the WBC announced that they were staking not one, but two, Mayan belts on September 14th.

The WBC is going to sanction the heavyweight contest between Tyson Fury and Otto Wallin, which takes place in Las Vegas. And they are sanctioning the junior middleweight bout taking place on the same night, between Jaime Munguia and Patrick Allotey in Carson, California. 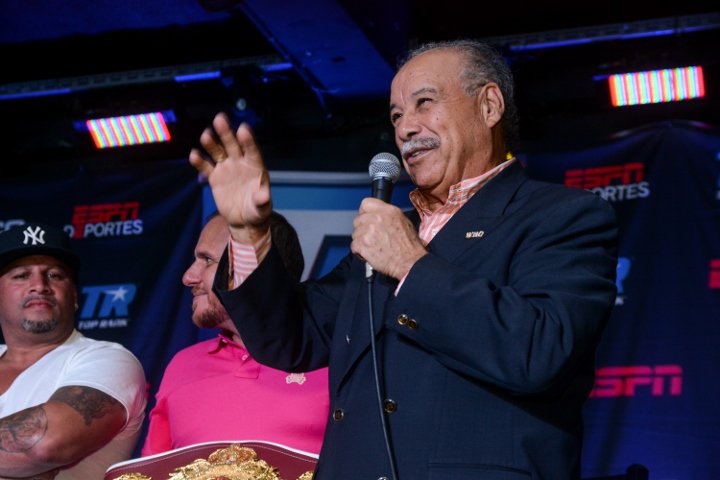 But the WBO Prez has taken exception to the fight with Munguia, who is the WBO's world champion at 154-pounds.

According to WBC President Mauricio Sulaiman, they initially felt it was necessary to give the belt to one event - but there was a draw in their voting process - so now two events will have the Mayan belt involved.

“These belts are tremendous works of art which has Mexico`s heart in it. And whoever wins them will take them home and cherish them for the rest of their lives. It is a piece of history for Eternity. The Governors` choice was a draw, but no instant replay was needed in this one. And we feel it`s only fair to award two different belts to two different cards," Sulaiman said.

The WBC have made some very controversial moves in recent years, like ordering their champions to make mandatory defense against champions of rival organizations. And they recently took some heat after making Canelo Alvarez the first ever "Franchise champion" at middleweight, while elevating interim-champion Jermall Charlo to a full WBC champion.

But Valcarcel says enough is enough, and makes it clear that he wants the WBC to stop piggybacking on events that have nothing to do with their organization. Valcarcel has long claimed that Sulaiman and the WBC are creating titles to latch on to key fights that don't involve their organization.

"What the hell are these people from another sanctioning body doing handing out copper and silver, Mayan, pearl, studded aluminum, Aztec belts in bouts sponsored by other organizations, to contenders who don't really care about these palooka belts. This needs to stop, enough already," Valcarcel vented.

The Mayan belts are basically trophies. No one is defending any of the commemorative trinkets. If you view it for what it is; a trophy from an organization that likes the presentation of belts, no one should have a problem…

The WBO prez is right. But f[I]u[/I]ck the WBO too. We need to get rid of all these worthless alphabet groups.

[QUOTE=The D3vil;20037855][IMG]https://media.giphy.com/media/Z9OGuQyrfHAE8/giphy.gif[/IMG] Yeah, they did. Darrin Morris. They moved him up twice in the super middleweight rankings in spite of the fact he had only fought once in 3 years and his last fight he beat a dude with 60…

[QUOTE=tophat1;20036684]Times are bad when the WBO criticises you, didnt they have a guy in the rankings that had been dead for a few months[/QUOTE] [IMG]https://media.giphy.com/media/Z9OGuQyrfHAE8/giphy.gif[/IMG] Yeah, they did. Darrin Morris. They moved him up twice in the super middleweight rankings…