WBC, WBA Back Canelo in Test Controversy: He is Innoncent!

The headlines have exploded from the moment it was revealed that Saul 'Canelo' Alvarez had tested positive for trace levels of the banned drug clenbuterol.

Golden Boy Promotions confirmed via a news release that Canelo provided the positive sample as part of the voluntary testing program he requested ahead of his rematch with Gennady Golovkin at T-Mobile Arena in Las Vegas on May 5. 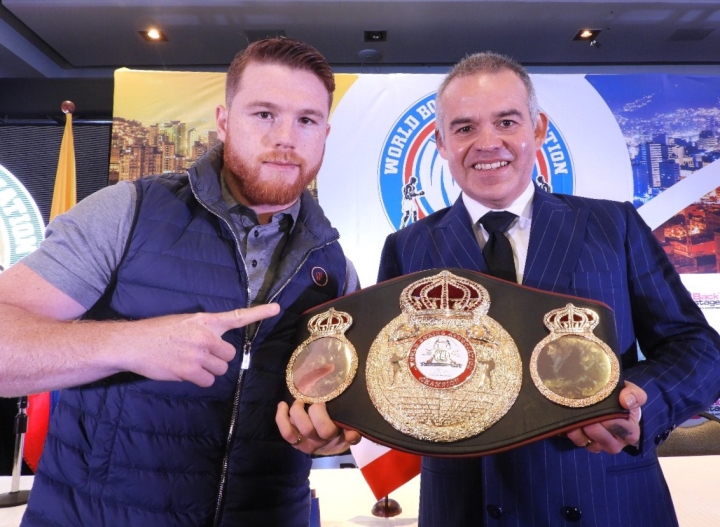 Golden Boy's statement added that Daniel Eichner, director of Sports Medicine Research and Testing Laboratory who conducted the tests, said via a letter: "These values are all within the range of what is expected from meat contamination."

The first bout between Canelo and Golovkin ended in a contentious draw.

"We are going to follow the same line that we have taken in each of the positives [for other boxers who tested positive for clenbuteral]. We will follow the protocol and we will work with the boxing commission where the fight will take place to get to the bottom of things," said Sulaiman to ESPN Deportes.

"In a superficial way, as far as we know about clenbuterol, because of the level found and with the clean record of Canelo, who has been a part of the program of the Voluntary Anti-Doping Agency for four years and had never tested positive, and considering that the problem of clenbuterol is a public health issue -  everything indicates that it is a food contamination."

Gilberto Mendoza, the President of the WBA, is also backing Canelo with this problem.

"I believe in Canelo's innocence. He has always shown himself to be a clean athlete. It seems that the issue of clenbuterol is a common problem in Mexico, and on some occasions a sister organization like the WBC has had to study this problem more often in the past and I think they will have much more experience in this regard.

"I know that it is within the levels that are reflected by the consumption of contaminated meat and as I have been able to read that he will undergo any test and if it maintains that, then the WBA will be on Canelo's side with the doors wide open as we have always done. We are going to have a big fight on May 5. This will add a bit of drama to the fight. I know the fight will continue, and we will agree to establish additional protocols, although this procedure is led by VADA and there should be no problem."

The Nevada State Athletic Commission has yet to make an official ruling on the status of the rematch.

[QUOTE=BlakBread904;18568893]it's saying that the levels of clenbuterol in Canelo, were a lot higher than other guys who got popped for "actually doping" and not eating tainted meat...[/QUOTE] Then why is the PED guy who tested Canelo's urine in SLC and…

[QUOTE=BigStomps;18553949]English motherfuccer! What exactly does all this bullshet mean?? And no I'm not gonna read all that bullshet in that link you posted. I rather have you break it down in English if you can.... Thanks![/QUOTE] it's saying that the…

[QUOTE=Jubei;18553851][url]https://www.ncbi.nlm.nih.gov/pubmed/4045696[/url] Therapeutic dose (20, 40 and 80 micrograms/man) of clenbuterol hydrochloride, a beta 2-adrenergic stimulant, was orally administered to healthy volunteers, and the unmetabolized drug in plasma and urine was determined by enzyme immunoassay. [B]The half-life of clenbuterol in plasma…