Wilder is currently involved in a mediation process to force a trilogy fight with WBC heavyweight champion Tyson Fury.

Back in February, Fury dropped and stopped Wilder in seven rounds to capture the WBC title at the MGM Grand in Las Vegas. 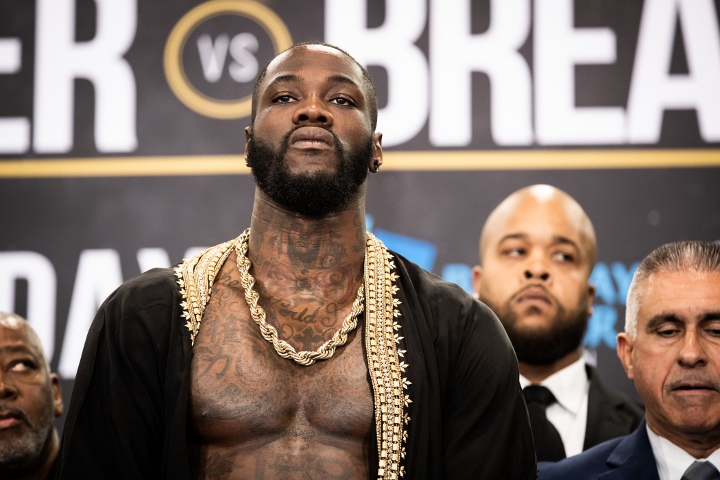 The third fight was pushed back several times due to the coronavirus pandemic.

As the situation dragged on, Fury announced that he was going in another direction as Wilder's rematch clause had expired.

Wilder, who strongly believes his rematch clause is still valid, initiated the mediation process to secure his shot.

"There is an issue that we are aware of that Tyson Fury and Deontay Wilder have some sort of mediation process going on and that's the only thing, but we don't have any details," Sulaiman told Sky Sports.

"We're just hoping that everything gets resolved and everybody is happy and we see great fights inside the ring. Wilder is a tremendous, important element. He was five years champion of the WBC. Extremely loyal.

"The greatest knockout ratio. The percentage is unbelievable and he is a very dear fighter, a champion in the WBC and he deserves, of course, another opportunity. He gave Tyson Fury the opportunity and Tyson Fury beat him, knocked him out, and, of course, Wilder is in the mix. He deserves an opportunity and we will see how things evolve in the coming year."

A fully conditioned Wilder lost against a 50% fury And got ****ed in their 2nd fight.. I cant fkng imagine what are these bumzquad thinking a mentally broken Wilder can even have a chance to win against a Fury on…

Caps so rtrd guys can have ezier time reading.. not all caps means "angry", dumbass.. It is funny how delusional wilder bumzquad can be, their brain works in a different way..uhhh, no, something is not right with that statement.. they…

[QUOTE=Squared.Circle;20930296]Yea UKAD did genuinely nearly become bankrupt with the hearings and Fury threatening to take it to court to prolong the case. But the fact is, it took them nearly a year to even notify Tyson and Hughie of any…

[QUOTE=MCFM;20936047]What? U think 2nd KD was harder when Fury stood up like he forgot to delete his **** history and still fought the round? IT MAKE SENSE IN EVERY ASPECT, WILDER IN BEST CONDITION COULDNT KO A 50% FURY; GOT…

[QUOTE=Roberto Vasquez;20936006]That makes no sense - Wilder put FUry down twice, the 2nd time very hard. So this is what makes you think Wilder couldn't KO Fury?? [/QUOTE] What? U think 2nd KD was harder when Fury stood up like…