WBC Prez: We've Had Canelo as P4P #1 Since He Beat Golovkin

World Boxing Council President Mauricio Sulaiman is not surprised that Mexican superstar Saul "Canelo" Alvarez is being listed as the top pound-for-pound fighter in the world by various outlets.

Back on November 2 at the MGM Grand in Las Vegas, Canelo moved up by two weight divisions to score a knockout over Sergey Kovalev to capture the WBO light heavyweight title. 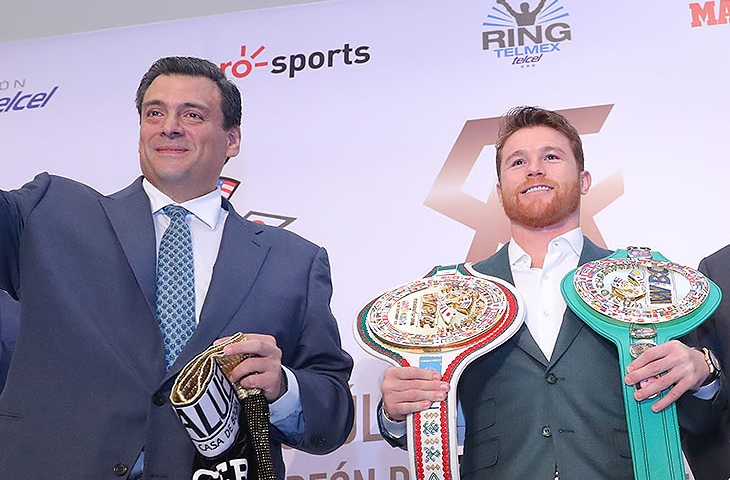 There is no determination at the moment as to which weight class Canelo plans to fight in.

But Sulaiman explains that Canelo has been regarded as the best fighter in the world by the WBC since beating Gennady Golovkin by way of a close twelve round majority decision back in September 2018.

"We named him that since the moment he defeated Gennady Golovkin, Canelo is a right-handed boxer who continues to break paradigms and overcome obstacles. We are proud that a Mexican has a designation like the one made by [various outlets]," Sulaiman said.

"He already had [that status], Canelo has shown his greatness inside the ring and has maintained it. How good it is to have his place in these publications."

And regarding another Mexican fighter, Julio Cesar Chavez Jr., Sulaiman believes that he's been placed in the right fight against Daniel Jacobs, on December 20th.

[QUOTE=aboutfkntime;20187730]not having a go man, because you seem honest... but do you really think Cotto won that fight...? how... ? I have heard posters argue that Canelo lost to Lara... and I even heard someone say that Canelo lost to…

[QUOTE=JLC;20187485]I agree that Loma and Terrance have better defense. I agree that Terrance is obviously more versatile I will add that Loma has better consistent footwork and movememt. I think that Canelo obviously has much better power than either guy.…

[QUOTE=Jab jab boom;20187287]what can't and shouldn't be ignored is that those names you mentioned that Canelo "beat", many were controversial. Strong arguments can be made that he has 2 wins and 3 losses against them. The favoritism he receives from…

[QUOTE=JLC;20187211]If weight wasn’t a factor who would be the best ? That is spot on. And how do we determine this? By the eye test (who looks to be the most talented) but also and more importantly (IMO) the resume…

[QUOTE=Jab jab boom;20185966] But aside from that, p4p is really supposed to be, if size wasn't a factor, who would be the best. Now if Canelo did have a size and weight advantage over Crawford and Loma, You think he'd…