WBC Prez: If McGregor Beats Ranked Contender - He Can Get Title Shot

World Boxing Council President Mauricio Sulaiman explains that UFC superstar Conor McGregor would be eligible for a WBC title shot - if he defeats a ranked contender.

McGregor made his boxing debut in August of 2017, when he was stopped in ten rounds by Floyd Mayweather at the T-Mobile Arena in Las Vegas. 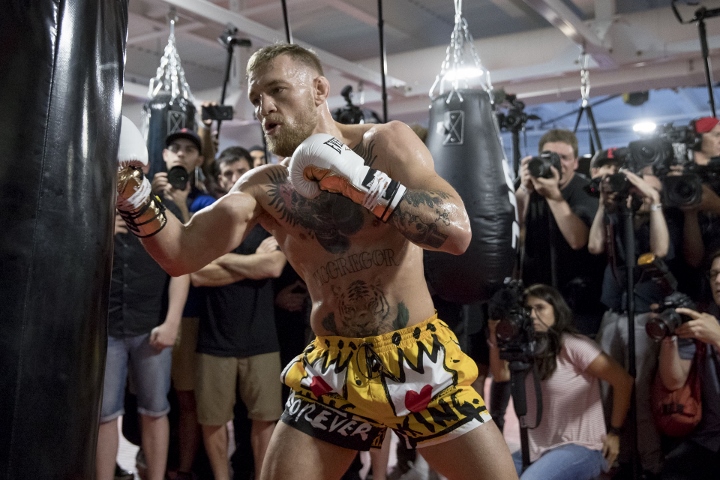 After suffering that loss, he returned to the UFC -with another contest in the cage taking place later this month.

Last year, McGregor made it clear that he fully intends to return to the sport of boxing in 2021.

In the alternative, he would like to fight for a world title - in order to become a male athlete who won championships in boxing and mixed martial arts.

Sulaiman would allow McGregor to get his wish - but he would need to beat a ranked contender to get in position to achieve that goal.

"I would say, he needs to face and defeat a ranked fighter, then he would be eligible to be ranked and to compete for a title. Because, we have plenty of examples of Muay Thai fighters, who turn professional in international boxing, and they are eligible to fight for the title," Sulaiman told The Sun.

"We also have amateur superstars like Vasiliy Lomachenko, they come into professional boxing and fight for the title and it's proven it works."

McGregor has very little amateur boxing experience, while Lomachenko was a two-time Olympic gold medal winner with a 396-1 record in the unpaid ranks.

After watching McGregor's performance against Mayweather, Sulaiman believes the MMA fighter has the necessary ability to compete in boxing.

"What we saw with Mayweather was of course different with the times, the rounds, it is not the same to fight five rounds to then go twelve rounds. But he has ability, he has power, he has status as a fighter," Sulaiman said.

[QUOTE=Roadblock;21014825]But Manny has the green light as a current WC, on that the WBA is worse than the WBC at least they want him to beat somebody, with Manny its come on over lol.[/QUOTE] Manny's an actual boxer.

[QUOTE=YoungManRumble;21014633]I mean it was a little extreme. Mostly just a lazy joke based on 'Title Shot' in thread title. But damn if it doesn't seem like he is trolling all of boxing and wants people to hate him. Everyday he…

McGregor will lose his next UFC fight and when he does they need to scrap the McGregor/Pac plans.

[QUOTE=Lomadeaux;21014820]What a joke. That dude ain’t beating a top contender, much less a top ranked amateur.[/QUOTE] But Manny has the green light as a current WC, on that the WBA is worse than the WBC at least they want him…

What a joke. That dude ain’t beating a top contender, much less a top ranked amateur.