WBC Prez: Canelo Dropped After Not Enrolling in Testing Program

According to the president of the World Boxing Council (WBC), Mauricio Sulaiman, his organization was forced to remove Saul 'Canelo' Alvarez from their middleweight rankings due his failure to enroll in the WBC's 'Clean Boxing Program.'

Sulaiman states that Canelo will be reinstated to the WBC's rankings after he registers in the anti-doping test program.

Per the WBC's rules, every champion and every contender ranked within the top 15 is required to register with the Clean Boxing Program - which is regulated by the WBC and drug testing agency VADA. 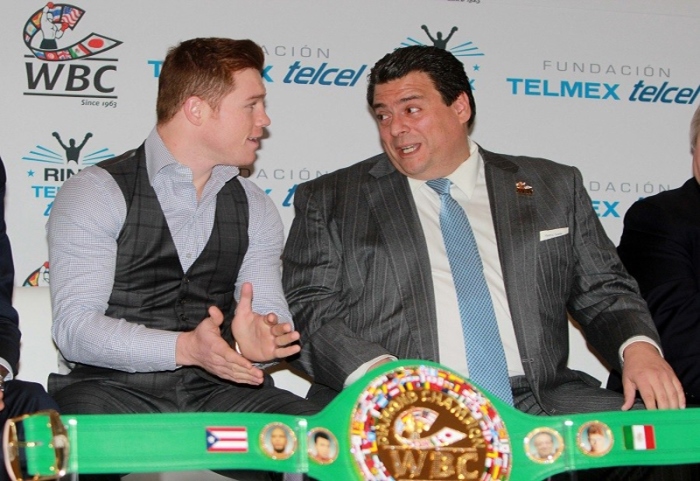 Canelo is currently serving a six-month suspension from the Nevada State Athletic Commision, after he tested positive for the banned substance clenbuterol back in February.

This suspension ends in mid-August, and he intends to return to the ring on September 15th - as part of the Mexican Independence Day weekend.

"[Canelo was removed from our rankings] because he refused to sign up for the Clean Boxing Program as stated in the rules," Sulaiman said

"[He will] not necessarily [be gone for good]. If he signs up, he will be back in the rankings."

Canelo's drug test failure forced him to withdraw from a scheduled rematch with IBF, WBC, WBA, IBO middleweight champion Gennady Golovkin, which was scheduled for May 5th at T-Mobile Arena in Las Vegas.

Canelo and the WBC have had a very rocky relationship in the last two years.

But, after Canelo tested positive for clenbuterol - it was Sulaiman who publicly defended him at every turn.

Canelo was very firm that his drug test failure was directly connected to his consumption of contaminated meat during training camp in Mexico - a claim that Sulaiman fully backed.

Even with his overwhelming support for Canelo, Sulaiman is bound to the rules of his organization and he has to follow the guidelines when it comes to a fighter not enrolling in the required testing program.

[QUOTE=Jubei;18775233]Still refusing to enroll to the CBP because he cant pull out there as easily. I wouldnt be surprised if Canelo suddenly ends random testing after a couple months. More specifically he'll fight Spike while being tested and then ends…

[QUOTE=MDPopescu;18772974]... on another hand, I suspect that neither GGG wanted so much to beat Canelo -- having in mind the possible big money in the rematch and/or trilogy...[/QUOTE] True. Imagine if Bob Arum was involved in this.. it would be…

Still refusing to enroll to the CBP because he cant pull out there as easily. I wouldnt be surprised if Canelo suddenly ends random testing after a couple months. More specifically he'll fight Spike while being tested and then ends…