Already carrying the intrigue of a 50/50 light heavyweight matchup, the stakes have significantly raised for Badou Jack and Marcus Browne.

The two are set to collide this weekend in Las Vegas, in chief support to the welterweight title clash between Manny Pacquiao and Adrien Broner (Saturday, Showtime Pay-Per-View, 9:00pm ET/6:00pm PT). Throughout the buildup, the pair of light heavyweights have repeatedly shrugged off questions regarding future fights, refusing to look past one another.

It’s unlikely that their mindset will change between now and the opening bell, but the World Boxing Council (WBC) has certainly sweetened the pot for whomever prevails. 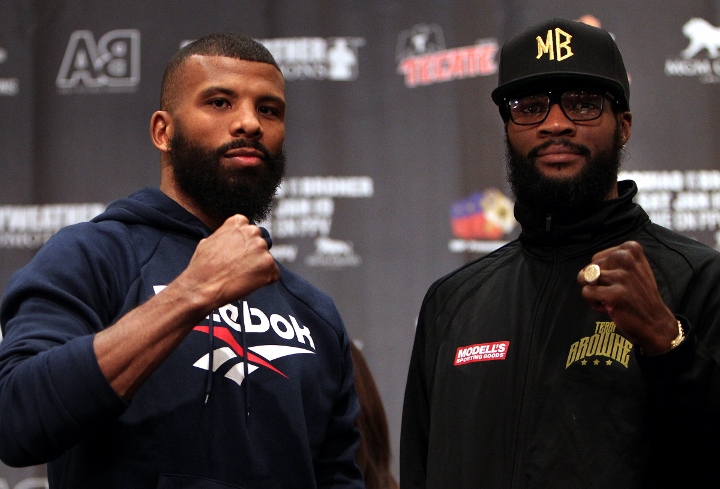 “The winner of Saturday’s fight between Badou Jack and Marcus Browne will be (the) mandatory (challenger) against Oleksandr Gvozdyk,” Mauricio Sulaiman, president of the WBC confirmed Thursday morning.

The winner was originally being steered towards a possible clash with unbeaten titlist Dmitry Bivol—who holds the World Boxing Association (WBA) bauble—but Thursday’s announcement by the WBC certainly changes that dynamic.

Jack (22-1-3, 13KOs) came within inches of nabbing the WBC—and lineal—light heavyweight crown in his last fight, settling for a 12-round draw with then-champion Adonis Stevenson last May. The now 35-year old Las Vegas native (via Sweden) gave up another alphabet title just to secure the opportunity but returned home empty-handed.

Stevenson has since lost the title to Gvozdyk, suffering an 11th round knockout at the hands of the unbeaten Ukrainian in a mandatory title defense last December in Quebec City.

The bout left the exiting champ in the toughest fight of his life, slipping into a coma but whom has since shown tremendous progress, regaining consciousness and has even once again begun to speak.

Meanwhile, Gvozdyk (16-0, 13KOs) and his team will have to pay even closer attention to a fight where many have struggled to predict a winner.

Browne (22-0, 16KOs) enters this weekend’s clash with Jack as an unbeaten contender and—at 28-years of age—the much younger of the two. Where the 2012 U.S. Olympian doesn’t quite measure up against Jack—a former two-division titlist who is 3-0-2 (1KO) in title fights—is big fight experience.

Saturday will mark a considerable step up in class for Browne, who’s struggled to capitalize on career-best wins over Thomas Williams Jr. and Sean Monaghan, both coming in 2017. In his most recent appearance, the unbeaten contender from Staten Island, New York overcame a mid-fight knockdown to otherwise soundly outbox Lenin Castillo last August.

A steadfast deadline has yet to be placed for a mandatory title fight. It is expected that Gvozdyk—currently without any concrete plans for a voluntary defense—will be ordered to begin negotiations sometime in the very neart future with Saturday’s winner.

[QUOTE=DuckAdonis;19443843]Gvozdyk gonna **** one of them up... Rooting for Drawdou to whoop on Browne doe[/QUOTE] Doubt it. Gvozdyk may win, but if Jack wins today, he's not going to destroy him or anything. Jack is going to be in the…

[QUOTE=_Rexy_;19444191]Bana is a blast man!! You should come one year![/QUOTE]Trust me, I would love too, however wifey has seen the photos and videos too! Lol! I'm like "you should go with your friends to Mardi Gras," tying to set up…

[QUOTE=_Rexy_;19443841]a snowy 14 degrees up here. I am very much hating.[/QUOTE]14 degrees! Sounds lovely! Lol! My Brother went to Caribana two years ago, and sent me photos and videos! I was hating too!

Gvozdyk gonna **** one of them up... Rooting for Drawdou to whoop on Browne doe