Josh Warrington is set to headline Matchroom’s first show of 2021 on February 13, with Eddie Hearn confident that the IBF featherweight champion will be in a unification fight with WBA champion Can Xu.

The Warrington-Xu fight was originally pegged for early June at Headingley rugby league stadium in Leeds, Warrington’s first fight since re-signing with Hearn. But the coronavirus pandemic put paid to that and Warrington, who has not boxed since stopping Sofiane Takoucht in two rounds in October 2019, was left on the sidelines during Matchroom’s Fight Camp summer series and the Wembley Arena residency between October and December.

The announcement by the British Boxing Board of Control to scrap all professional boxing in January in the UK seemed to further delay Warrington, but the Board announced on Monday morning that it intended to restart shows from mid-February, meaning that Warrington will keep the date he had been preparing for. 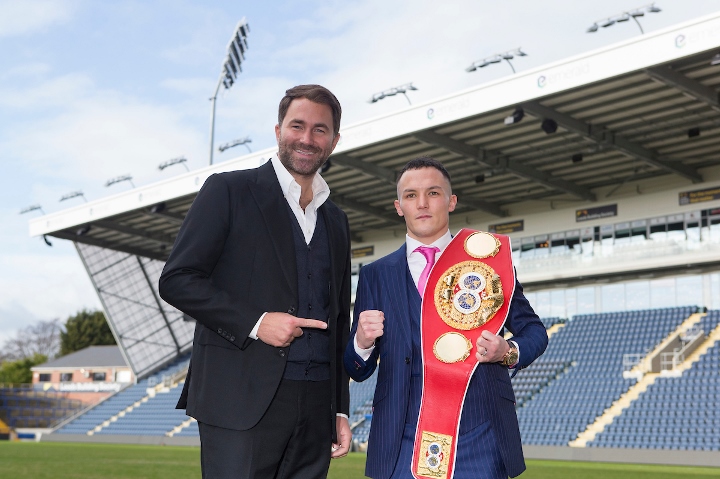 Hearn hopes to confirm the fight on Tuesday or Wednesday, one of a series of cards to be announced stretching into April, including a rematch between Alexander Povetkin and Dillian Whyte and a rearranged WBO cruiserweight title fight between Lawrence Okolie and Krzysztof Glowacki.

A deal to face Xu is yet to be concluded, though, while Xu’s status with the WBA is confirmed. The Chinese boxer had been expected to be elevated to “super champion” after Leo Santa Cruz, who last boxed for the title in February 2019, lost to Gervonta Davis in a fight the WBA somehow approved for both their super-featherweight and lightweight titles. Santa Cruz, though, is refusing to give up the belt, Hearn said.

“The only issue we have is surrounding the WBA title,” Hearn told Boxing Social. “[Santa Cruz] will never box at 126 again, in my opinion. But, in boxing, people want to stop your progress and get in the way and, apparently, he will be boxing at 126. I want Josh Warrington to become WBA super champion if he takes that fight. That fight with no crowd is a complete 50-50 fight, it is such a tough fight.

“The next 24 hours will be critical for that fight.”

The second show, on February 20, will feature the European welterweight title fight between David Avanesyan and Josh Kelly, which was pushed back from January 30.

“2021 for us is the year that Matchroom dominate globally,” Hearn said. “In that respect, in out key market, which is the UK, we have to come out firing.”

One thing that is unlikely to be announced this week, though, is a venue, with Matchroom looking at several options in the UK for a behind-closed-doors fight.

These two bouts could have had a trilogy in the time that they have both been scheduled. They should name the card “The resurrection”

[QUOTE=ozzy616;21012397]I'm rather doubtful that boxing will restart in the UK in mid-Feb. Even if the current lockdown ends in mid-Feb, which is by no means certain, even a reduction to Tier 4 over England won't allow boxing to restart in…

Xu vs Watrington really should happen! I could only imagine how that weekend and the following weekend Valdez vs Berchelt can ruin any future excitement in boxing. How can there be anything to top those two bouts unless the 175…

February 13 is a month away, and the fight isn't even signed? Not happening.