Warren: If Yarde Gets Kovalev vs. Canelo Winner - We'll Step Aside

Frank Warren, promoter of Anthony Yarde, says a deal to face WBO light heavyweight champion Sergey Kovalev is just about finished up - which is going to be on a working date of August 24 in Russia.

Yarde is the mandatory challenger to Kovalev's title - but the Russian boxer is also being pursued by the biggest name in the sport, Saul "Canelo" Alvarez.

Canelo, who holds the WBC, IBF, WBA world titles at middleweight, is willing to move up by two weight divisions to take the fight. 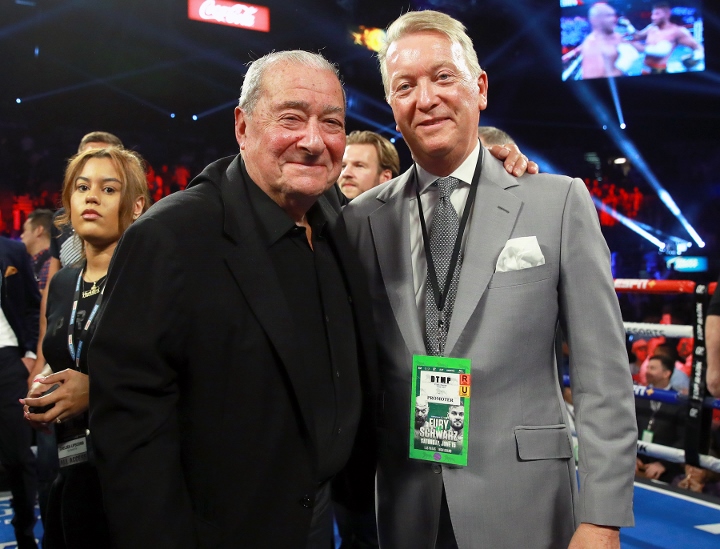 However, Kovalev is not impressed by what his team has called a "low" offer to face Canelo - and they believe there isn't enough time to get a deal done.

Warren says a step-aside deal can be easily worked out - if Yarde is guaranteed the winner of the fight.

"I don’t think Saul ‘Canelo’ Alvarez will fight Gennady Golovkin again and Canelo appears to be looking at Sergey Kovalev. Obviously, our man Anthony Yarde is in that spot. The WBO have ordered that because he’s the mandatory, but if the Canelo vs Kovalev fight came up, we’d be willing to discuss stepping aside – subject to Anthony being guaranteed to face the winner," Warren told Talk Sport.

"Kovalev knows there is more money in him fighting Canelo and we know there is more money for Yarde in facing the winner of that fight. So it all makes sense from a financial point of view. It’s a business, we have to make some of these big fights happen.

"The cut-off point for Yarde and Kovalev is this week, so we’re going to find out if Canelo moving up to light-heavyweight is real very soon, because Kovalev’s team have some decisions to make. The only reason the Yarde and Kovalev fight hasn’t been properly finalised at this moment is because they’re holding out for Canelo. Plain and simple."

[QUOTE=_Rexy_;19883280]I didn’t say that I didn’t expect a hydration clause. I said I had no interest in the fight if there was one.[/QUOTE] I wasn't referring to you Rexy. Just venting!

[QUOTE=Brettcappe;19883273]So let's get this straight. Canelo has insisted on these clauses on 160 and 168 pound fighters yet he wouldn't ask for one for a 175 pound fight. Boxing promoters including Kovalev's have mentioned it yet the posters on boxingscene.com…

[QUOTE=_Rexy_;19883244]Rocky F'king Fielding had a rehydration clause. And that's why I have no interest in Canelo/Kovalev.[/QUOTE] So let's get this straight. Canelo has insisted on these clauses on 160 and 168 pound fighters yet he wouldn't ask for one for…