Thomas Patrick Ward lost his 100 percent record but looked luck to escape with a technical draw after his fight with Thomas Essomba on the Matchroom show in Peterborough was stopped in the ninth round after Ward suffered a terrible cut in a head clash.

Ward, who is ranked as high as No 3 by the WBO at super-bantamweight, brought a 29-fight unbeaten record into the ring against Essomba, a smaller man, who took the fight at only one week’s notice. Yet Ward looked off the pace throughout and Essomba found him surprisingly easy to hit, as he drew the taller man in and landed well, particularly with the left hook.

It was Essomba’s second fight since lockdown, as he lost a 12-round decision to Sunny Edwards at super-flyweight in August, and he started well, tagging Ward with a decent left hook in the second and rocking him in a thrilling fourth round with a series of hard left hooks, which Ward walked straight into.

To Ward’s credit, he kept pushing forward and did quite well with his jab, but he lacked his natural rhythm, with Essomba gaining confidence as the fight wore on. 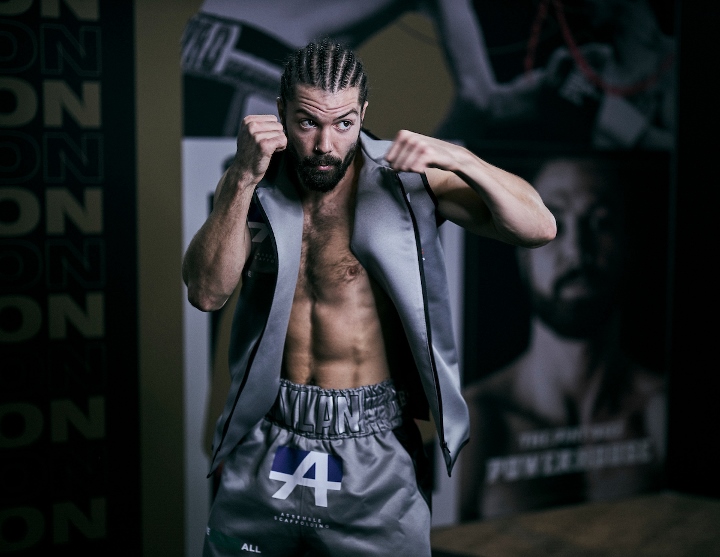 The turning point came in the seventh, when Ward suffered a horrible gash over his left eye in a clash of heads.

Ward survived one trip to the ringside doctor at the start of the eighth round, but then boxed like he knew he was on borrowed time, waling forward looking for a big shot, but Essomba moved and made him miss, countering well.

At the start of the ninth round, referee Bob Williams led Ward to the doctor again and this time it was waved off.

Marcus McDonnell scored it to Essomba by 88-85, while Terry O’Connor sided with Ward by 88-84, incredibly giving Essomba only two rounds. Michael Alexander scored it 86-86, making it a technical draw.

Two weeks after losing on the previous Matchroom show in Milton Keynes, Kane Baker returned to winning ways with a six-round points win over the previously unbeaten Meshech Speare.

The lightweight bout was hastily arranged after the cancellation of the Savannah Marshall-Hannah Rankin fight. Baker had gone eight rounds with Aqib Fiaz and tried to make his fitness tell by forcing the fight against Speare, who had been out of the ring since May last year and had never boxed beyond four rounds.

Speare carried power and landed plenty of good shots, but he struggled to deal with Baker’s workrate and was caught repeatedly by Baker’s non-stop combinations. If there had been any doubt about the decision, Baker dominated the final round to make sure. Baker won 59-56 on referee Michael Alexander’s card.

Ellie Scotney looked impressive as she made a successful professional debut as she beat Bec Connolly on points in a featherweight six-rounder.

A former international amateur, Scotney was simply a class above Connolly, who was having her 11th professional fight and had shared the ring with Terri Harper, Natasha Jonas and Rachel Ball. She struggled to land a glove on Scotney, though, who was smart defensively, moved well and picked holes in Connelly’s defence from the opening bell.

A left-right combination in the third round forced Connolly to take a knee, but she was brave as anything, as she came forward throughout and never stopped trying. She also suffered a cut next to her left eye after a clash of heads in the fifth.

Rylan Charlton scored the best win of his career as he walked through Joe Laws in three rounds, knocking him down three times to wreck Laws’s unbeaten record.

Laws had no time to establish himself as Charlton went after him from the first bell. The first indication of how things were going was when Charlton hurt him with a left hook to the body and, as Laws tried to punch his way out of trouble, he was tagged with a left hook that sent him to the floor.

Charlton just did not allow Laws to settle and ended things in no uncertain terms in the third. An overhand right landed and sent Laws tumbling to the floor. Referee Marcus McDonnell allowed him to continue despite looking on unsteady legs, even giving him an extra rest when he fell to the floor and his gumshield fell out. But Charlton was right on him, jumping in with big hooks and finishing him off with a big right uppercut. McDonnell abandoned the count at eight, with Laws showing no signs of rising, at 1:39.

Tips for reporting on boxing. Fighter's name followed by their record at some point in the article, preferably early on. Just saying.