Walter Kautondokwa Bounces Back With Two Round TKO Win

Nelson Mandela Hall, Harare Showgrounds, Harare - Walter “The Executioner” Kautondokwa made a big statement with his comeback fight by stopping Simeon Tcheta from Tanzania in the beginning of the 2nd round.

Kautondokwa returned to the ring for the first time after losing to Demetrius Andrade for the vacant WBO world title. The middleweight bout with Tcheta was scheduled for 10 rounds in Harare, Zimbabwe.

Kautondokwa started the fight with strong combinations to the body, leaving Tcheta hurt at the end of the first round. At the beginning of the 2nd round, Kautondokwa continued with strong punches and the corner threw in the towel one minute into round 2 to avoid further punishment and prevent injury to their man. 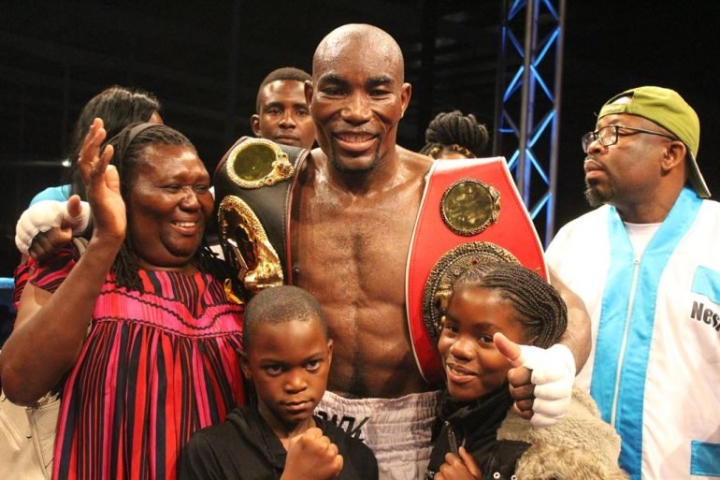 Kautondokwa’s Trainer, Nestor Tobias, believes that Kautondokwa is back for good.

“The loss against Andrade was unfortunate. We took that fight on very short notice but that is water under the bridge. All that matters is that Kautondokwa is back now and ready to challenge top contenders in the middleweight division so they better be ready. We expect him back in the WBO top 15 ratings and then we will be back to business”.

Kautondokwa now boasts a record of 19 fights, 18 wins and only 1 loss and remains a dangerous knockout specialist with 17 of his 19 fights coming inside the distance.

Walter is an animal man. I wasn't happy with that Andrade fight because I knew that it wasn't on equitable training terms. Any other day Andrade would have been in big trouble. I hope that he gets the worldclass opportunity…

Does he still have a pulse? I won't read much into his win because he could have been fighting a bum.

he is a bad MF, but he sure wasnt ready for andrade. ive enjoyed what i seen, and i wanta see more of this guy on the world stage.