Despite skepticism of the show never seeing the light of day, Mariusz Wach and Kevin Johnson are set to move forward with their heavyweight collision.

The pair of 40-year old heavyweights square off Friday evening at Pa?ac w Konarach in Konary, Poland. Both took to the scales on Thursday, with all 14 participants on the show wearing protective masks and practicing social distancing amidst the ongoing coronavirus disease (COVID-19) pandemic.

Wach weighed 274.5 pounds, up more than four pounds from his 10-round loss to Dillian Whyte last December in Diriyah, Saudi Arabia. Johnson tipped the scales at 263.3 pounds, roughly seven pounds heavier than he was in a 5th round knockout loss to Martin Bakole in his most recent ring appearance last October. 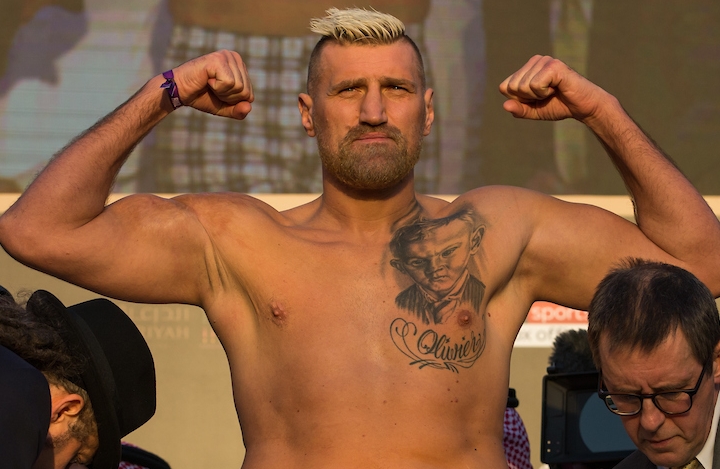 The event will stream live on Pay-Per-View through EventTV.global (PLN 20/$4.75 USD), the only way that fans both locally and abroad will be able to view the bouts. As per regulations from the Ministry of Health for the Republic of Poland, fans are not permitted inside the hosting venue.

Friday’s bout is the first back in his home country for the locally based Wach (35-6, 19KOs), who hails from nearby Krakow. The 6’7 ½” heavyweight enjoyed a pair of early knockouts in his home country last September and October, respectively, before hitting the road for a last-minute fight with Whyte. Both heavyweights took that fight on short notice, with neither giving a particularly good account of themselves—a statement which could made for Wach’s 2019 campaign as a whole.

The one-time heavyweight contender—who extended then-lineal champion Wladimir Klitschko the full 12-rounds in their November 2012 championship clash—has dropped four of his last six starts, with his 2019 run bookended by losses. The year began with a disappointing 8th round stoppage at the hands of Bakole last April.

“Bakole has some unfinished business with The Viking,” Rafal Biernacki, Wach’s manager and head of Wach Boxing Team—whose outfit will present the show—told BoxingScene.com. “That’s why we chose Kevin for this fight because of his last fight with Bakole. Mariusz was not in his best shape for his fight with Martin and was stopped. He overtrained and had nothing on fight night.”

A win on Friday would actually set Wach up for a far more intriguing clash, as he was once due to face unbeaten heavyweight prospect Agit Kabayel (19-0, 13KOs). As has been the case with many events in 2020, the planned crossroads bout fell through due to the ongoing global health crisis.

“We are still interested in fighting Agit,” insists Biernacki. “We just need to stay busy and be ready for when everyone is ready to reschedule that fight.”

Staying busy has become a way of life for  Johnson (34-16-1, 18KOs), a 40-year old from Lawrenceville, Georgia by way of Asbury Park, New Jersey who has spent most of the past eight years fighting overseas, particularly in Germany and England. He will enter this fight having lost his last four, including a rare stoppage loss at the hands of Bakole in his most recent start.

The eight months between fights is Johnson’s longest inactive stretch since 2017, when he returned to the ring following a 22-month hiatus. He has fought 14 times since then, including three fights alone in December 2018. Most have come in the role of opponent, as he is just 5-9 over that stretch, including shutout losses to Kubrat Pulev, Daniel Dubois and Filip Hrgovic.

All participants for Friday’s show were required to submit to health screenings and wear protective masks at all times. The seven-fight card features all regionally based boxers save for Johnson.

I know this fight of Marious Wach vs Kevin Johnson is past his sell date various years ago, but later is good compared to never. :boxing:

Just wait until this slug fest is on Youtube and watch it at 125% speed. :boxing:

[QUOTE=trippers1;20605063]The footwork , hand speed and general quality of both fighters make this a must see. Just a pity I'm busy that night[/QUOTE]. So am I , I'm taking the mother in law to bingo 😂😂😂😂

Your not going to get much quality fights in June with the break up of fight camps since the Corona virus so don’t expect quality showings up from anyone until gyms reopen to normal standards ,but these fights will pave…