As previously reported by BoxingScene.com, Amir Khan feels he has plenty still to offer to boxing and says retiring too early would "haunt me forever".

Khan was beaten by Terence Crawford in a WBO welterweight title bout on Saturday after succumbing to a low blow in the sixth round in New York.

The 32-year-old insisted after that he had been hit "in the balls" and would not ordinarily have bowed out early. 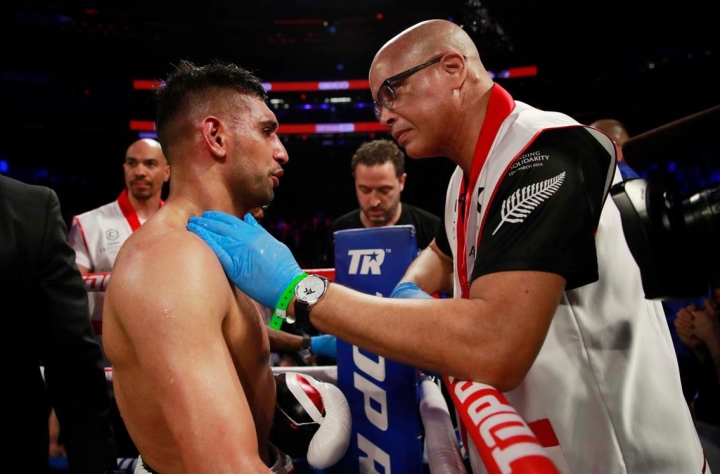 Khan also disputed suggestions he could now be done in boxing and reiterated that point as he explained how a premature retirement would hurt him.

"When you get older, everything changes," he told the Independent. "The whole ball game changes and everything you do is for your family

But Khan believes he will enjoy retirement when it does come, adding: "These next couple of weeks will be quite interesting.

"I have to sit down with my close friends and also my wife. I'm at the age of 32 now, but I feel like I've got a lot left in me. Retirement is not something I'm looking at and I definitely wouldn't want to leave the sport in this way.

"I think retirement will be nice - one day, when I do retire. I think I will enjoy it because it would take a lot of pressure off me. You are then a free man."

Khan's trainer, Virgil Hunter, agrees with the boxer's position of having a lot left in the tank.

"The crowd will always be bloodthirsty and want to see a dramatic ending but you have to look out for the safety of the fighter,” Hunter told BBC Five Live.

“He's not the kind of fighter to make things up. I believe he was incapacitated. We knew we were behind but Amir was starting to work things out and pick up his rhythm. He showed he could move - his legs aren't gone - but he fought a hell of a champion. I will be honest with him when I think it's time to retire.”

So far, Khans tank is the only part of him that wasn't made in China. Khan fan(s), what's your take on his future ????

Khan could be a stepping stone fighter at this point however wouldn't put him in against the elite fighters of the division. He can be a gate keeper going forward and make good money while taking less risk. Not sure…

[QUOTE=hayZ;19684982]Probably taking more punishment there too. They sparred hard, probably take years off your career. Don't a lot of boxers say that though? Who actually retires at 30 in Boxing anymore. He just $5m minimum for this fight. You think…

virgil and Khan are not a good team. he has no confidence in Khan and it shows

Yeah, Khan't has a lot of gas left in the tank, talking gas and that's all.