Viktor Postol Hopes To Get Jose Ramirez Title Shot Next

Postol fought off a stiff jab and utilized his reach advantage to keep the fight at range.  The Ukrainian, who was working with Hall of Fame trainer Freddie Roach, was the more active fighter from bell to bell, throwing 587 punches compared to just 306 for the French Mimoune.

While Mimoune was elusive and able to slip many of Postol’s power shots, he never left himself in a position to effectively counter his taller and more aggressive opponent.  The southpaw Mimoune (21-3, 2 KOs) averaged just 30 punches per round and was off balance for much of the fight, throwing wide looping shots that rarely landed. 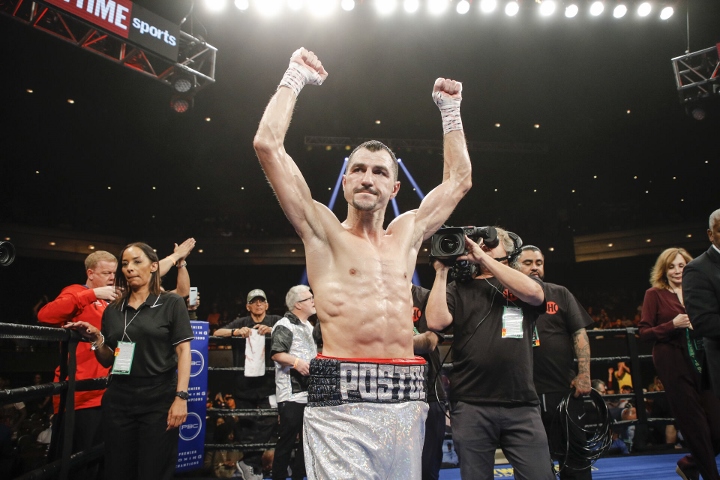 After the fight, Postol attributed his victory with being able to remain disciplined and stick to the game plan of Roach.

“I always try to be disciplined,” Postol said.  “I did well tonight.  My opponent’s style was a little awkward, but I did okay.  If I could fight a guy like (Terence) Crawford, I can handle Mimoune.  And I did.”

After the fight, Postol, who’s only losses came against top fighters Terence Crawford and Josh Taylor, promised to chase the elite of the 140-pound class.

“I want the next big fight,” Postol said.  “Doesn’t matter who – WBC Champion Jose Ramirez would be a great choice.  I was away for two years so I was a little bit worried before, but now I feel like I’m back. I’m 100 percent back and ready for the next test.”

Hall of Famer Steve Farhood, who served as unofficial ringside scorer for the SHOWTIME telecast, gave Postol all 10 of the rounds in the WBC Eliminator.

[QUOTE=Boxingraya;19700790]Postol want's to get fuked up, I guess.[/QUOTE] I dont know about that, player. Postol has a difficult style and Ramirez fights like a simpleton.

LOL good luck hoping for that fight. Or thats how I'm seeing it anyway. Postol looked pretty good out there this weekend & he gave Josh his biggest challenge so far. Idk that Arum is gonna love this fight for…

Fight will never happen, a Mexican, Arum promoted WBC champ facing a high risk/low reward mandatory hasn't happened since...ever? I won't even blame Ramirez as long as he fights someone else good because I doubt Bob would let him take…

Postol would outbox Ramirez, it’s only so long that paper mache champ can duck real competition! Bob knows the walls closing in, he’ll stall this fight as long as possible!

Postol want's to get fuked up, I guess.