LAS VEGAS – Viktor Postol got off to a fast start Saturday night and inched closer to another title shot.

The Ukrainian contender built an early lead and defeated France’s Mohamed Mimoune by unanimous decision in a 10-round, 140-pound WBC elimination match on the Robert Easter Jr.-Rances Barthelemy undercard. Judges Robert Hoyle (99-91), Patricia Morse Jarman (98-92) and Benoit Roussel (97-93) all credited Postol with a comfortable win in a fight Showtime aired from The Chelsea inside The Cosmopolitan.

Postol (31-2, 12 KOs), a former WBC 140-pound champion, moved toward a shot at Jose Ramirez, who now owns that WBC super lightweight title. Postol is ranked No. 4 by the WBC in its super lightweight rankings, one position beneath Mimoune (21-3, 2 KOs). 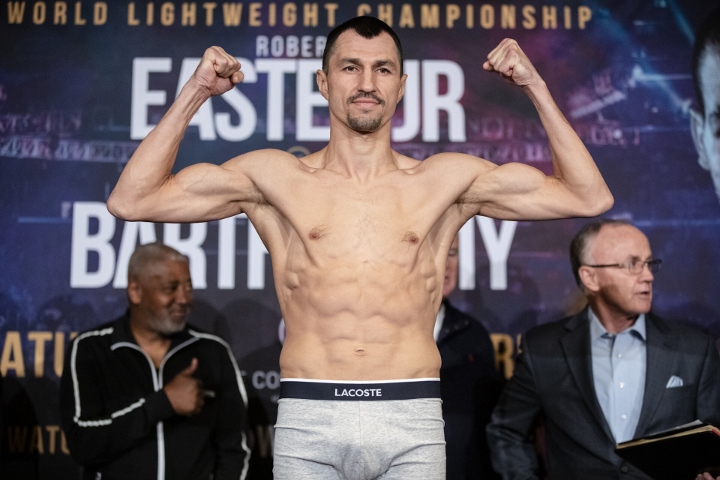 The 35-year-old Postol completely controlled the fight until the fifth round, when his awkward, amateurish, left-handed opponent began landing with some regularity. Postol wasn’t as sharp late in their bout, particularly defensively, but he still won with ease.

Mimoune clearly needed a knockout by the 10th and final round, but his lack of power made that improbable.

Postol and Mimoune each landed his fair share of punches in a competitive ninth round. Mimoune also bled from his left ear during that round.

Byrd warned Mimoune in the eight round for shoving Postol in the face while they were tied up. Otherwise, Mimoune continued to succeed in the eighth round, when he landed several right hooks and straight lefts.

Mimoune started strong in the seventh round by landing a straight left. He continued connecting in that round

A straight left hand by Mimoune caused Postol to hold him in the sixth round. Mimoune’s right hook caught Postol later in the sixth, which prompted Postol to go after Mimoune.

Toward the end of the sixth, Mimoune landed another straight left. That shot initiated a wild exchange just before the sixth round ended.

Mimoune managed to sneak in several right hooks during the fifth round, his best three minutes of the fight to that point.

Postol knocked Mimoune off balance with a right hand during the second half of the fourth round. Postol attempted to capitalize on that moment, but he couldn’t land another clean shot.

Mimoune moved out of the way of some of Postol’s punches during the third round. He also briefly placed Postol in a headlock once Postol missed a punch late in the third round.

Postol opened up on Mimoune throughout the second round. He landed an array of straight right hands and left hooks on Mimoune, who seemed reluctant to engage.

The first round was full of entanglements Byrd broke up. Postol connected with the cleanest punch of the round, a straight right hand, just before the 10-second warning.

A very good matchup. Like both, and postols style will be fun to watch against Rameriz. Just what Rameriz needs to get some attn back hes been losing outside of California. Styles make fights they say and that matchup will…

[QUOTE=E-Sharp;19698982]Won me a lot of money tonight. Lol at the dumba[I]s[/I]s bookies who made Mimoune the favorite just because he beat Sam Eggington[/QUOTE] Who is Mimoune? SMH

Won me a lot of money tonight. Lol at the dumba[I]s[/I]s bookies who made Mimoune the favorite just because he beat Sam Eggington

Postol vs Ramirez is a good fight.