Vijender Singh continues his ascension in the pro ranks.

Scores were 80-68 across the board in favor of Singh (12-0, 7KOs), the greatest boxer to ever come out of India’s amateur boxing program and looking to carry such history into his pro career. 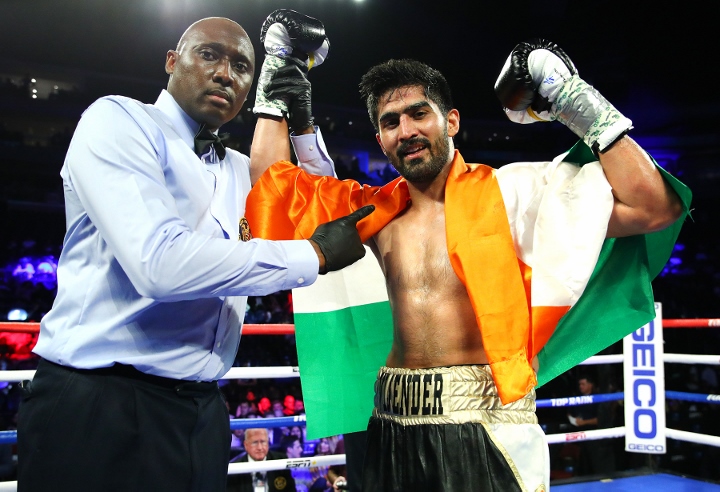 The opening round saw Singh fight at an economic but effective pace, taking openings to the body as Adamu (33-15, 26KOs) fought behind a tight defensive guard with greater concern for remaining on his feet than looking to pull of the upset.

Singh came out swinging for the fences early in round two, depositing Adamu on the canvas courtesy of a straight right hand. Adamu beat the count but quickly found himself on the defensive against his swarming foe. Singh continued to target the body, landing right hands downstairs before bringing his attack back up top. Adamu managed to clinch out of trouble just enough to disrupt a steady offensive flow, but found himself in a deep hole just after two rounds.

Mixing up his attack in a bit, Singh found a home for his right uppercut early in round three. Adamu absorbed the shots well, but wasn’t throwing back and with clinching his only form of effective defense by that point. Looping right hands from the 42-year old Ghanaian journeyman were easily dodged by Singh, often effectively countered by power shots from Singh which had Adamu slightly wobbly upon returning to his corner at the end of the round.

The bout reached a monotonous pace from that point onward, with Singh providing all of the offense and Adamu seeking a moral victory in looking to last the distance. He accomplished just that, but not before suffering two more official knockdowns late in the fight although Singh was unable to land that fight-ending blow to truly deliver a statement-making performance.

Instead, Singh settles for his second win of 2019 after having not fought at all one year ago. A steady stream of build-up fights will likely be in place for his 2020 campaign before being moved towards a title shot.

The bout streamed live on ESPN+ in the United States, in supporting capacity to 140-pound mandatory challenger Jack Catterall (24-0, 13KOs) in a stay busy fight versus Germany’s Timo Schwarzkopf (20-3, 12KOs).

I thought he was supposed to fight for the Commonwealth title.

I don't see much improvement. No lateral movement or good footwork. He might even be regressing.

how can he be fighting a guy with 15 losses when he is 14-0 - ridiculous. I thing Virgil Ortiz is 14-0 - they can fight and my money would be on Ortiz despite the weight difference.

The minute he steps up he will get laid out.