Vic Pasillas vowed to deliver a statement making performance in his televised debut.

Somehow, he still managed to undersell his talent.

A relentless attack by the East Los Angeles-bred southpaw proved too much for fellow unbeaten prospect Ranfis Encarnacion, whom Pasillas stopped in the 6th round of their FS1-televised chief support Wednesday evening at Microsoft Theater in Los Angeles, California.

Pasillas dropped Encarnacion late in round six, with referee Sharon Sands forced to stop the contest at 2:26 of round six. 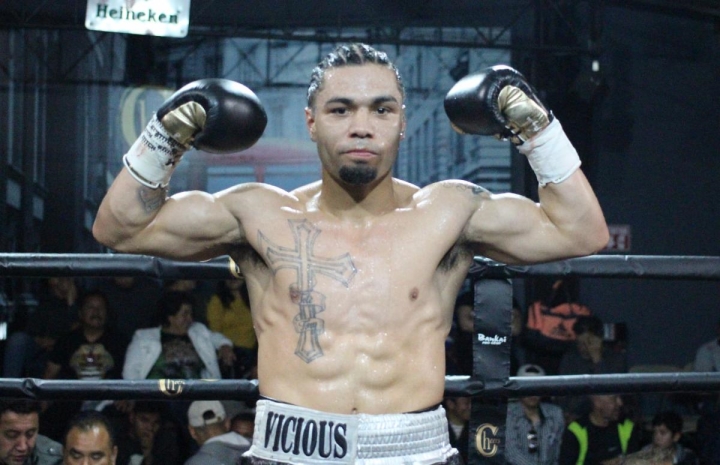 The battle of undefeated featherweights was sold as San Cristobal, Dominican Republic’s Encarnacion coming in as the more polished of the two. That judgement came solely on the relatively thin résumé of Pasillas, who once fought under the Top Rank banner but now proudly represents Premier Boxing Champions (PBC).

Pasillas took advantage of Encarnacion’s tendency to start slow, overwhelming the Dominican prospect with hand speed and relentless workrate. The East Los Angeles native came flying out the gate, immediately working his way inside to negate the height and reach advantages Encarnacion enjoyed on paper.

Round two saw the same pattern applied by Pasillas, a squat southpaw who constantly kept Encarnacion off rhythm.

Encarnacion discovered his offense in round three, landing three right hands in the first minute. Pasillas took the shots well, even managing a crisp right hook during the sequence. Statistically, Encarnacion enjoyed his best round of the fight but was still outworked nearly 3:1 by Pasillas.

Encarnacion found himself in a world of trouble late in round five, getting clipped with a straight left hand among an assortment of power punches. Pasillas moved in to close the show, but instead settled for thoroughly outworking his battered foe in realization that the stoppage was well within sight.

It would come one round later. Pasillas had Encarnacion pinned on the ropes, unloading with power shots upstairs before willing his foe to the canvas. Encarnacion attempted to beat the count, only for his corner to literally throw in the white towel to rescue their battered charge.

“I want to clear out 122,” Pasillas told Fox Sports’ Jordan Plant after the win. “This spot at 126 was easy to make. I’m eating three times a day all the way up to Tuesday morning. So I want Angelo Leo, you have Rey Vargas, the kid from Uzbekistan (unified titlist Murodjon Akhmadaliev)… line ‘em up. I want all my straps!”

I’ve shot a couple of his fights here in SA couple times they brought him down here to fight some easy opponents but can tell he’s no joke now that’s he’s stepping up!

About as one sided as a fight can be. Pasillas is a hand full for anybody.