Vergil Ortiz Doesn't Think He Can Beat Spence Now, 'But Maybe In A Year'

Vergil Ortiz Jr. is a confident, talented contender who has knocked out each of his 15 pro opponents.

Even Ortiz recognizes, though, that he’s not quite ready to beat Errol Spence Jr. just yet. The 22-year-old Ortiz honestly acknowledged during a recent interview on SiriusXM’s “Ak And Barak Show” that he feels he is about a year away from being able to knock off the unbeaten IBF/WBC welterweight champion.

“As of right now, you know what? I would give anyone in the 147 division a hard fight,” Ortiz said. “I don’t care who it is. As far as me thinking that I can beat him right now, I don’t think so. But maybe in a year. I’m not gonna rush myself, like these other fighters. I’m not gonna call someone out that, you know, just for clout or anything like that. You know, I genuinely think that I can beat some of these guys.” 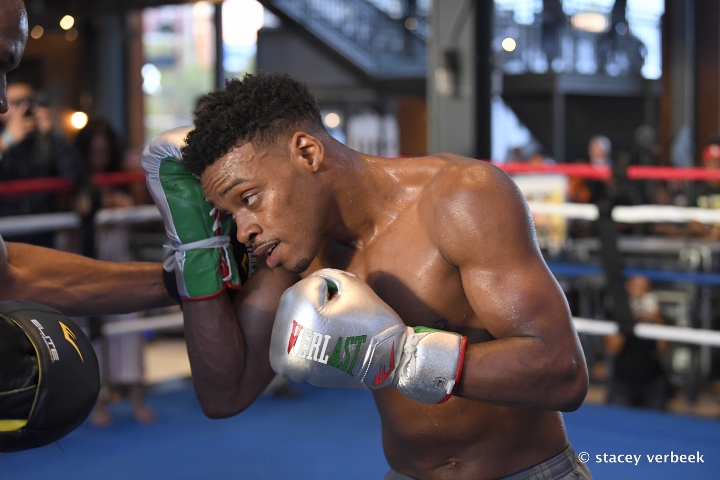 Ortiz has admired Spence since they trained at the same gym in Dallas, but he eventually would love the opportunity to beat the 2012 U.S. Olympian. The Grand Prairie, Texas, native considers Spence (26-0, 21 KOs) and WBO champion Terence Crawford (36-0, 27 KOs) the top two welterweights within their loaded division.

“It’s definitely between him and Crawford,” said Ortiz, who’s ranked seventh by the WBC. “You know, Crawford definitely is more technically sound. But, you know, I wouldn’t think he’s as strong as Spence or anything like that. [He] doesn’t have the same size, so I would say that they’re both the toughest, but in their own element.”

Now that Spence has recovered from injuries sustained in a car accident October 10 in Dallas, he hopes to land higher-profile fights against such established welterweights as Crawford, Manny Pacquiao and Danny Garcia. But Spence has paid close attention to Ortiz’s rise through the 147-pound division.

“Just to see him get to that point, you know, it’s great seeing because I remember him as a little kid, a little crybaby kid,” Spence told Premier Boxing Champions’ Ray Flores recently as part of an Instagram Live interview. “He used to cry a lot. But now, to see him get to this point and looking to challenge me in about two, three years, it’s good that he know that two, three years, he might be ready, you know.

Ortiz was confused by Spence’s statement about him being “a little crybaby kid.”

“I’m not sure what he meant,” Ortiz said. “I’ve definitely never been hurt as a kid. You know, I was pretty much the best one in the gym. He might just be like – I don’t know. The only thing that I can come up with is he’s just like basically trying to explain how little I was when he met me. But other than that, I really don’t understand.”

Ortiz respects Spence, but if typical boxing business issues allow them to square off one day, the hard-hitting Ortiz is all for it.

“I think if the fight’s to be made it’s because it was meant to be made,” Ortiz said. “You know, we used to train at the same gym. I used to watch him train. I seen him get ready to go to the Olympics and fight in these tournaments to qualify. And I hope he thinks that I’m good enough or whatever.”

[QUOTE=theface07;20532404]It's called being realistic and knowing that he still has more to learn and pivotal experience to gain. You are obviously blinded by American arrogance and the apparent need in US culture to boast and brag about your abilities even…

[QUOTE=theface07;20532398]Hell no. Did you even read the medical report on Spence's injuries? They were all minor, scrapes, cuts, bruises and some busted teeth. He had no internal injuries, nor did he break any bones to my knowledge. What makes you…

This guy might be my favorite fighter right now. Humble and brings it on fight night. He's a gamer that legit talks to fans on and on. He's right though. Spence is a full grown man. Ortiz still looks like…

[QUOTE=jackblack008;20530627]After that major accident, i would go with even Broner beating Spence.[/QUOTE] Hell no. Did you even read the medical report on Spence's injuries? They were all minor, scrapes, cuts, bruises and some busted teeth. He had no internal injuries,…