Vergil Ortiz On Canelo Leaving: Now Golden Boy Has More Time To Think About Us

After rising star Vergil Ortiz Jr. moved up to welterweight in 2019, reeled off four knockout victories against a better grade of opposition than he had been facing, and was widely acclaimed as the prospect of the year, he and Golden Boy Promotions had big plans for him in 2020.

Of course, that was before the coronavirus pandemic hit in the early spring and shut down the sports world for months. Like most fighters, Ortiz’s schedule was knocked off course and he will wind up boxing just once this year.

But the 22-year-old Ortiz is mature beyond his years and understanding of how things have gone in a difficult 2020.

“I wouldn’t say that disappointed is the word to express how I feel about it, but I definitely feel kind of bummed out because and my dad (and co-trainer Vergil Ortiz Sr.) and my team definitely felt like this year, 2020, was going to be my breakout year,” Ortiz told BoxingScene. “But I’m going to be in this sport for a long time and I feel like I have plenty of time to do what I want to do.” 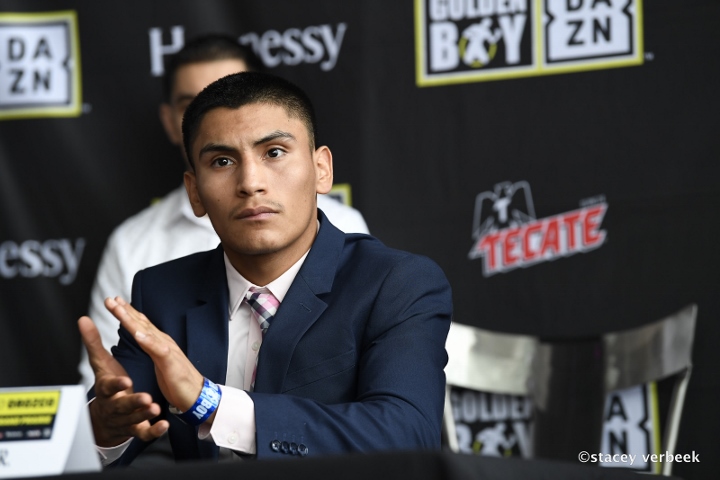 When Golden Boy was finally able to put on its first event during the pandemic, it made Ortiz (16-0, 16 KOs), of Grand Prairie, Texas, the headliner of its DAZN-streamed card on July 24 at the Fantasy Springs Resort Casino in Indio, California. Ortiz didn’t miss a beat as he beat down and stopped Samuel Vargas for a seventh-round knockout. Vargas’ only previous stoppage losses had come against Errol Spence Jr. and Danny Garcia, elite welterweights set to face each other in a world title bout on Saturday night.

Since the win over Vargas, a lot has changed for Golden Boy in that its cornerstone fighter, superstar four-division world titlist Canelo Alvarez, was released from his contract as part of a settlement of a lawsuit against Golden Boy and DAZN.

If there is a silver lining to Golden Boy and its No. 1 fighter parting ways, Ortiz believes it means he and other key younger fighters at the company, such as lightweight Ryan Garcia, junior lightweight world titlist Joseph Diaz Jr. and middleweight Jaime Munguia, will get more attention.

“I feel like we’re in a very good position. I really am sad about Canelo leaving,” Ortiz said. “I’m going to miss fighting on his undercards. But it’s going to give us a lot more opportunities. They have more time to think about us.

“Canelo is the cash cow of the sport so Golden Boy wanted to take care of him first. I understand that. I would think the same thing and I would want them to take care of me. So, now we’re the ones on top and they’re going to want to take care of us. The attention is on us now. They want to build us up.”

Golden Boy CEO Oscar De La Hoya told BoxingScene that Ortiz will be back in action in February or March, which Ortiz said he is OK with. By fighting early next year, Ortiz and Golden Boy believe that will leave enough time for him to get in three fights in 2021.

In the meantime, Ortiz, who said he would love a shot at welterweight world titleholder Terence Crawford (37-0, 28 KOs), has stayed in the gym in the Dallas area awaiting the call for the specifics of his next fight.

“I’m pretty much in shape all the time. I’m in the gym now just training and getting my timing in, sparring here and there,” Ortiz said. “I’m pretty much just waiting for the call about when I’ll be fighting and I get to go to California and hang out there for a few months.”

Riverside, California, is where Ortiz’s co-trainer, Robert Garcia, is based and Ortiz said he plans to go there soon.

“Me and my dad are thinking about going there so I can spar for a few weeks and then come back (to Texas) because we don’t have a specific date when I’m going to fight,” Ortiz said. “We’re probably going to go in December. We’ll be out there to stay after Christmas.”

During the pandemic Ortiz has also added to his team by bringing on manager Rick Mirigian and adviser MTK Global.

Ortiz said he decided to sign with Mirigian because he has been impressed by how he has handled the career of unified junior welterweight world titlist Jose Ramirez, Ortiz’s favorite fighter.

“Jose has been my favorite fighter since he was in the Olympics (in 2012). I’ve been watching him since then,” said Ortiz, who has become friendly with Ramirez in recent years since they share Garcia as a trainer. “So, Jose has talked to me about stuff Rick has done for him. It wasn’t like Rick was trying to get me to sign with him, but he explained what he did and how he was able to do it. I already had a good opinion of him. And then my dad and Robert, they were the ones pretty much managing me without actually being my managers.

Mirigian recently formed an alliance with MTK Global and they have signed several fighters together, including Ortiz.

“Rick is with them and I’ve signed with them as well. They’re an extra set of eyes and ears to get advice from,” Ortiz said. “They’re going to help me get more money. People are saying there will be more hands in my pocket but at the end of the day I’ll be getting more money and more benefit out of it than if I didn’t have them. Of course, they want to make money too, it’s a business. But I’m still benefitting from it. I’m content with it and I have a lot of confidence in what is to come in the future.”

[QUOTE=R-Hand Southpaw;20925960]With how much of a p.ussy you are can you really call yourself a man? Can't even answer the question and go straight back to Canelo lmfao. You cant define the word hater because you know deep down im…

Oscar is still an important name in boxing. Being associated with the Golden Boy, having him attend your fights means something. It means you're the anointed one. I expect to see Oscar at more of his events and do more…

[QUOTE=Al Broker;20925756]GBP and Canelo still running tingz!!![/QUOTE] With how much of a p.ussy you are can you really call yourself a man? Can't even answer the question and go straight back to Canelo lmfao. You cant define the word hater…

[QUOTE=R-Hand Southpaw;20925232]Bruh. "Canelo hater" Please define that so I can see what your definition is because I'm pretty sure my definition of hater and your definition are VERY different. Lmfao. Id bet money you dont have the balls to answer…

[QUOTE=Al Broker;20924565]I give you props acknowledging yourself as a Canelo hater doe. Lol. That’s the “us” innit. Lol. Oh no wait, is it GBP hate? Again you dorks are confused. ;)[/QUOTE] Bruh. "Canelo hater" Please define that so I can…