GRAND PRAIRIE, TX—A minute into the sixth round, Vergil Ortiz Jr. landed a whipping left uppercut to Antonio Orozco’s body and immediately followed it with an uppercut to the jaw. As Orozco took a knee, he shook his head and yelled “damn,” muffled through his mouthpiece. The blows had been painful, no doubt, but Orozco’s reaction was pure frustration: frustration with the reality that despite his best efforts, he was completely overwhelmed.

A combination moments later sent him to a knee again, eliciting the same reaction. The inevitability of the result had set in, but he was bravely prepared to face it.

Ortiz himself felt the result was inevitable as well—from the outset, and even as things started to look a little more difficult for him in the ring than they’d ever looked before in his professional career, as Orozco pressured him against the ropes at times during the first five rounds.

“It took everything I had to get him out of there. I thought I was going to knock him out in the 4th or 5th round. He was so tough,” said Ortiz following the bout.

Difficulty is of course relative to the skillset of the participant. Imagine being both so talented and so sure of your abilities that knocking your opponent out in the sixth round rather than the fifth feels strenuous by your standards.

In comparison to the rest of Ortiz’s professional outings, the Orozco bout was difficult. There were times early in the bout when fans saw Ortiz backed up, and what felt to viewers like a man fighting at a pace he wasn’t quite comfortable at. In reality, that wasn’t the case at all, as evidenced by the fact that Ortiz was able to ramp up the tempo all on his own and buzzsaw through Orozco in the sixth with a trio of knockdowns that ended the fight.

It’s quite the challenge to make Ortiz uncomfortable in the ring, as he appears to be one of the handful of specially gifted fighters in the world who do not have to negotiate between speed, power and accuracy. He doesn’t need to take anything off his shots to place them perfectly, or throw them quicker. Nor does he have to wait for clear openings to throw his power shots. Ortiz is like the ace pitcher who can paint the corners at 98 miles per hour. As Ortiz told The Sporting News earlier this year, “when I hit the bag, (I make) sure that every single punch that I throw is a hard punch. Sometimes boxers will throw a punch and it'll just happen to land. I make sure mine land, and they land good."

The most telling endorsement of Ortiz’s talent should come from his own trainer, Robert Garcia. With his charge in the biggest fight of his career, against a fighter who took another one of his pupils, Jose Ramirez--a unified world champion--to the brink, Garcia felt confident enough to corner two other fights on the main DAZN broadcast alone. In pre-fight meetings with the DAZN broadcast team, Garcia flat out predicted Ortiz would knock Orozco out. “We know he’s going to knock him out, we know that,” he said. While Garcia was cornering Hector Tanajara, Ortiz was in his locker room playing the piano—stopping when he was displeased with the piano’s tuning while playing the opening notes of Kanye West and Pusha T’s “Runaway.” 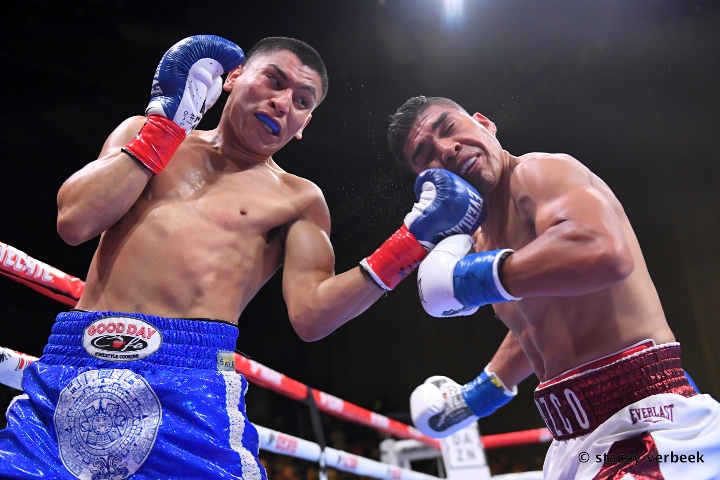 The win over Orozco cleared up any questions about whether Ortiz’s career-spanning path of destruction was simply a product of clever matchmaking or not. At this point, to call Ortiz a “prospect” would be stretching the term to simply include fighters who haven’t yet challenged for a world title. The 21-year old is beyond the stage where the standard fare of gatekeepers and journeymen and stepping stones could teach him much of anything, or the audience anything about him. The silly WBA “Gold” belt he received does technically make him a top contender for Manny Pacquiao’s legitimate WBA title, but in a more meaningful way, he should be considered a threatening matchup for any 147-pounder he could conceivably be put in the ring with.

“I didn't learn anything. I knew I had this in me. What round did it go ‘til?,” Ortiz asked following the bout as he surveyed a group of reporters for an answer. “You still have six rounds in me that you guys haven't seen in me. I've seen that person in the gym. You guys are just gonna have to wait.”

Just how long we’ll have to wait is the question. Ortiz is on the wrong side of the political street when it comes to the welterweight division, which belongs almost exclusively to Premier Boxing Champions and Top Rank. Nonetheless, Ortiz is unafraid to mention names like Keith Thurman, Danny Garcia and Shawn Porter, all of whom he has addressed specifically in speaking  to reporters.

“I'm not ready. I'll be honest. I'm not one of these fighters who's just calling people out. But I'll be ready soon. And I mean very soon. Those fights can happen next year. If they man up and let a fighter with only 14, 15 fights get in the ring with them, then I'll be happy to take those fights,” said Ortiz.

Ortiz’s outward personality can oscillate between supreme confidence, and a shy humbleness mixed with self-deprecation. Perhaps it’s because all the way through his remarkable amateur rise, which included seven national titles, he received very little media attention. And now, despite being maybe the most exciting new in-ring talent to come along in the last few years, he remains second-fiddle even within Golden Boy to his stablemate Ryan Garcia in terms of mainstream attention. Ortiz knows better than anyone how good he is, but he’s also wise enough to temper his evaluation of himself from time to time to avoid being labeled cocky.

Following the Orozco bout, Ortiz celebrated at a local Waffle House with a cola and all-day breakfast, the way a normal 21-year old would at 3 am after a big Saturday night.

But Ortiz is clearly no normal 21-year old, and his Saturday nights will get significantly better if the big names of the welterweight division are willing to join him at the table.

the crowd was electric. dfw definitely backing Ortiz. stay humble kid and keep racking up those KO's and W's.

Good kid....does some good charity work in and around Dallas.....but he leans forward too much. Gives up his height. Mark my words....someone is going to land a big uppercut on him, and then we'll see how he reacts. He took…

Don't get ahead of yourself people , this kid is good but no ready for Spence or Bud, they will pick him apart and toy with him......

Vergil Ortiz is the next big thing in Boxing. That's for sure!