Vergil Ortiz Eyes History: I Want To Be a Four Division Champion

The 21-year-old fighter continued an impressive KO streak — 14 career fights, 14 by knockouts — and survived short spurts of assault from a determined opponent who was a decade older than him.

Ortiz knocked down Orozco three times and stopped the fighter for the first time in his career. He told Boxing Scene that the formula behind his power-ridden fists is to train like he’s not a champion — at least not yet.

“A lot of my power comes from my technique. My trainers put in so much work into me,” said Ortiz “I want to be a four-division world champion. I just want to be remembered.” 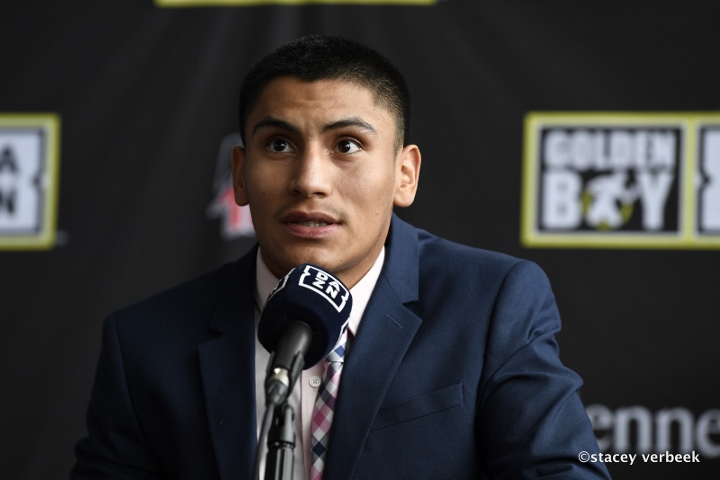 “When you have a young kid like that, you want him to have some tough rounds and go through the fire a little bit,” Gomez told Boxing Scene. “It’s part of his development. He faced some adversity against Orozco, but then he eventually figured it out.”

An interested observer during Saturday’s proceedings was another Texas technician in Errol Spence Jr. Both fighters grew up together in the same gym, and Ortiz said that he envisions a super fight with his friend once he’s a bit more seasoned and fighting at 154 pounds.

“I’m actually pretty happy that he showed up [for my Orozco fight]. It means a lot to me. He used to be my teammate, and he’s a great fighter,” said Ortiz.

When asked who is top-three 147-pound fighters are in the division, Ortiz listed Spence Jr., Terrence Crawford and Manny Pacquiao. Ortiz isn’t calling out the top dogs quite yet, but he feels like he can be ready for a Spence fight with about 10 more matches.

Gomez is also intrigued by a battle between the Juniors.

“We work with anybody and everybody. We have no issues whatsoever,” said Gomez. “We’re going to take our time and not push him where he’s in over his head. His time will come. He has his head on straight, and he’s humble.”

Gomez said the plan for Ortiz is to continue matching him with older fighters and former world champions who have more experience. There are no specific fighters in mind quite yet for the next opponent, but Golden Boy is looking at November or December as Ortiz’s return date to the ring. What’s for certain is that Oriz is now a welterweight who will solely fight at 147 for the foreseeable future.

“It’s all part of the process of building a world champion,” said Gomez. “His development has been a lot quicker than other fighters. There’s no question about that. He’s passed every single test.”

Gomez compares his rising star to another all-time Mexican great fighter who was a tall and lanky puncher in Erik Morales. As for Ortiz’s discipline, Gomez aligned his young bull alongside another legend in Bernard Hopkins.

Gomez said the Texas turnout in Ortiz’s hometown fight in Grand Prairie was a positive one, as they came close to a sellout with just under 3,000 fans in attendance.

“I think that we have something there that we can build on,” said Gomez. “There is room for improvement on our side to promote a little more in Texas. I’m excited about doing more stuff in Texas and the Dallas area. There is definitely an appetite for big time boxing. Vergil has given them hope.”

Vergil is the next big thing in boxing after Canelo Alvarez.

Vergil has a great boxing mind mature Beyond his years, he needs to be mixed up with different fighting styles not just Mexican style he needs to fight some slick black Fighters. At this point I think Ortiz would destroy…

Vergil Ortiz is very mature for someone of his age. he always impress me in his fights and when he is outside the ring. We are going to expect great things of him in the future. I also like when…

I'm very impressed with this kid, inside and outside the ring! He's been getting a lot of shine, but I think BScene is overlooking someone who is just as, if not more, talented than Ortiz: [B]Jaron Ennis: The future welterweight…

If he wants to win 4 belts he needs to go down to 140. That'll be a great place for him to gain experience vs other skilled young cats. Maybe even find a rivalry that moves into 147 eventually.