Verdejo's Coach Admits That His Boxer Did Not Fight as Expected

Ricky Marquez, the trainer of Puerto Rican lightweight contender Felix "Diamante" Verdejo, reacted to some of the critics who blasted his boxer's performance against Costa Rican Bryan Vasquez.

This past Saturday night at Madison Square Garden in New York City, Verdejo had to overcome some difficulties and a cut below his left eye to win a ten rounds unanimous decision. 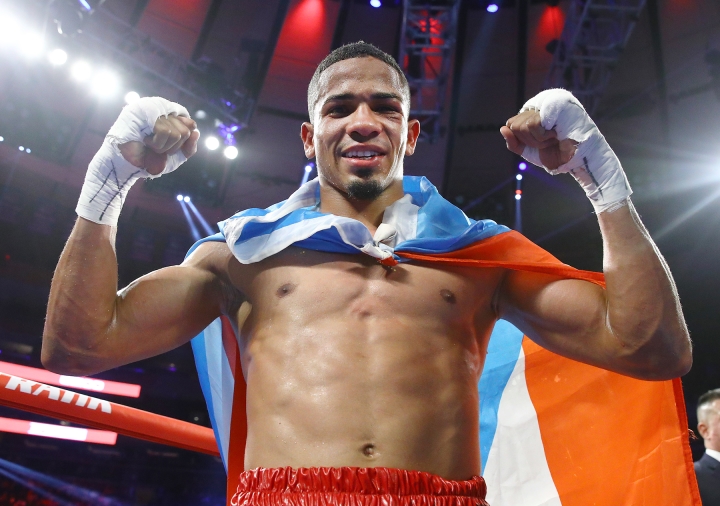 Verdejo's career was on the line in that fight, with his promoter Top Rank likely to dump him if he lost.

Now Verdejo is hoping to secure a world title shot at 135-pounds.

Last year, Verdejo suffered the first loss of his career when he was stopped by Antonio Lozada in the same venue.

"It's a fact that Felix did not fight as we expected and we accept the constructive criticism [the critics] want to make," Marquez stated.

"We can not cover the sky with our hands, but we had before us a opponent that we knew was uncomfortable, crafty and difficult to look good against because of his skills, experience and movements, and I told that to the press a few days before the fight.

[Vasquez's] three losses in 40 fights had been against three world champions and even so Felix dominated him in at least eight of the ten rounds, but he did not follow some instructions and in short he looked lower than the Felix we know. Now we will continue working because there is always room for improvement."

[QUOTE=angkag;19682698]Don't know the reason he's not developing - as Loma said, he had some decent skills in the amateurs, it just looks like he's boxing-by-numbers and can't see him standing up to anything even close to elite. Might be something…

Marques is single handly responsible for ruining all of the PR prospects..he himself is a bust, his fighter is an extension of him

[QUOTE=Bronx23;19682649]Kid needs a new trainer/team. He's got good power in the right hand but was throwing mostly single shots rarely threw a decent combination. He also doesn't know what to do when being pressured. From what I saw it wasn't…

Kid needs a new trainer/team. He's got good power in the right hand but was throwing mostly single shots rarely threw a decent combination. He also doesn't know what to do when being pressured. From what I saw it wasn't…