Vargas: It's My Time, After I Beat Pacquiao - A Star Will Be Born!

WBO welterweight champion Jessie Vargas, who won the title with a spectacular 9th round knockout of Sadam Ali last March 5,  told BoxingScene.com/Manila Standard in an exclusive interview that he wants “to go above and beyond that performance and put on a better performance” when he faces eight division world champion Manny Pacquiao at the Thomas & Mack Center on November 5.

In a wide-ranging  interview arranged by Lee Samuels of Top Rank, Vargas said that he is “much stronger today” after seven weeks of training under Dewey Cooper whom he described as “a phenomenal trainer.”

He told us he has “gradually increased  training everyday and  everything is coming along smoothly.” 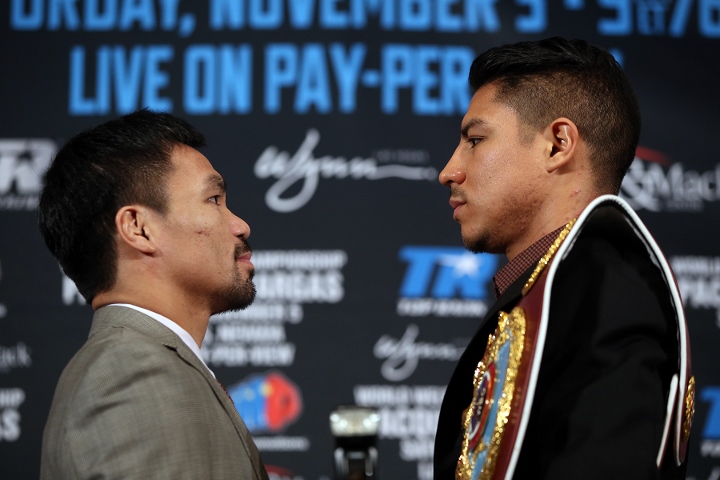 Vargas said that ever since he signed up with Top Rank, he had wanted the Pacquiao fight because Manny “was known and was on top of the division” which will “put me in a place of beating Manny and will prove that I am the best. Its a position I have dreamed of and plan to do that on November 5.”

While he conceded that Pacquiao is “a great fighter” Vargas said that while his own right hand is his big punch and is known as “the sleeper” he had “two great hands . My left and my right  are different weapons and (Manny) won’t know which will get him.”

He maintained that if he “sees an opening, I’ll go for a knockout.”

Vargas noted that he is a world champion and “feels positive I will retain my title and a star will be born” even as he pointed out that Pacquiao “ has had his time, now its my time.”

He said Pacquiao’s trainer Freddie Roach  and strength and conditioning mentor Justin Fortune were right when they said Vargas won’t run but will come to fight. He said “definitely we will come to fight” and that trainer Dewey Cooper had studied Manny’s style and “came up with a great fight plan  and I’m looking forward to a great fight.”

Vargas said he is in great shape and “at the highest level” and promised that he was “looking forward to this fight and the  fans will enjoy it.”

Noting that Manny was known for his speed, the WBO welterweight champion told us, “we trained on increasing speed” but conceded that Manny “has plenty of experience.”

Vargas plans to overcome Pacquiao’s speed and power although  Manny hasn’t knocked down any opponent since Miguel Cotto in November 2009.

Vargas said he will overcome Manny  with his “height, my reach, my talent and mostly my ring intelligence.”

Although he claimed he had “dropped sparring partners that even Floyd Mayweather Jr couldn’t drop” while training for his fight against Pacquiao and Manny thought Floyd had a strong right hand, he unfortunately couldn’t remember that names off the bat.

Vargas said “I feel and I know I am a great fighter. He (Pacquiao) had a lot of great success, now its my time.”

hope they keep a hospital bed space clear for you, cause youre going to get seriously hurt in this one mate, no doubt about it. This will be pacquiaos first stoppage for a long time

[QUOTE=Sparked_26;17141149]He has done well here. In another world where Eubank Jr finds his pen Vargas probably gets smashed to bits by Kell Brook.[/QUOTE] The Brook fight still wouldn't have happened. Vargas was just asking for too much money. It didn't…

No you won't Jesse. You'll still be a pretty boring fighter with little fan base.

Maybe Pac can get a ko. It will be the first time since Moby Dick was a minnow. That's probably why they chose this fight. To get Pac a flashy ko to retire on.

If he fights the same way as he did vs DeMarco 2 Star gets quashed Pac by TKO..