Vargas: Garcia Is On Pacquiao's Level; Would Be Action-Packed Fight

FRISCO, Texas – Now that he has boxed both of them, Jessie Vargas believes Mikey Garcia would give Manny Pacquiao everything Pacquiao could handle in a welterweight title fight.

Vargas survived a fifth-round knockdown against Garcia on Saturday night, but the former WBO welterweight champion feels Garcia proved his welterweight worth in a 12-rounder Garcia won by unanimous decision at Ford Center at The Star. Garcia got off to a slow start, but the course of their fight changed once Garcia drilled Vargas with a right hand that floored him with 41 seconds to go in the fifth round at the Dallas Cowboys’ training center.

“I think he can compete against anyone,” Vargas said in reference to Garcia during their post-fight press conference. “I mean, in his last fight that he had, previous to facing me, I think he came up short [against Errol Spence Jr.] But like I said earlier, you know, sometimes a professional athlete has ups and downs. But you can take it in properly, you can learn from it and become better as a professional athlete. And apparently, he has.” 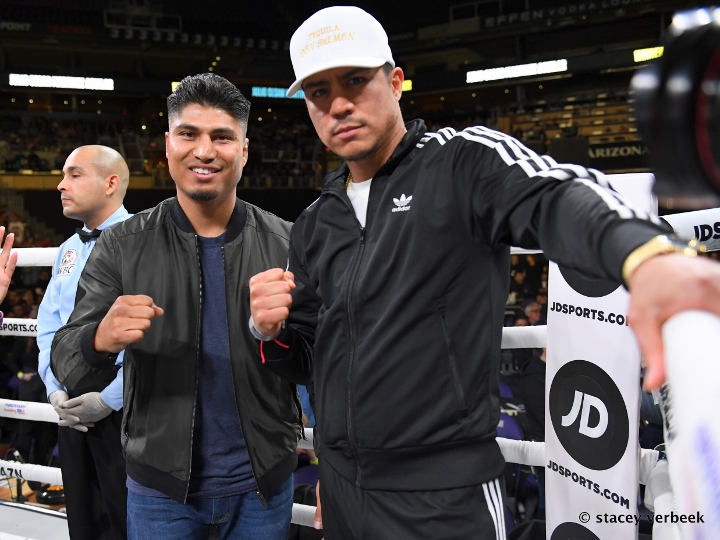 Pacquiao proved in his last fight that he, too, still can compete at the elite level, even at his advanced age. The Filipino legend edged previously undefeated Keith Thurman by split decision in that July 20 bout in Las Vegas and took the WBA “super” welterweight championship from Thurman (29-1, 22 KOs, 1 NC).

The 41-year-old Pacquiao dropped Vargas in the second round and beat him by unanimous decision to take the WBO welterweight title from Vargas in November 2016 in Las Vegas. Vargas (29-3-2, 11 KOs) isn’t sure if he’ll remain at welterweight or move up to 154 pounds for his next bout, but he knows he would watch a Pacquiao-Garcia fight if promoter Eddie Hearn can put it together.

Hearn would like to match Pacquiao (62-7-2, 39 KOs) against Garcia (40-1, 30 KOs) at some point this summer in Jeddah, Saudi Arabia. That’s the fight the 32-year-old Garcia, a four-division champion, emphasized he wants next above any other potential bout.

“I think that’s a good fight,” Vargas said. “I’d like to see it. I think that you would get another action-packed fight. I think Mikey’s a good, entertaining fighter. He’s a Mexican warrior and tonight you saw two Mexicans battling it out, as expected. And I think he can match up against top guys in the division. Credit to him.”

Despite Spence’s relatively easy victory over Garcia last March 16 in Arlington, Texas, Vargas is sure a rejuvenated Garcia has established himself as an elite welterweight.

“I would compare him to Manny Pacquiao, [on] that level,” Vargas said. “Like I said, in his last fight, previous to facing me, he came up short, you know, in a fight where I’m sure he learned a lot. And I think he stays [at] the top of the division if he wants to stay in the welterweight division. I think he would be stronger at 140, but [at 147] he’s also very good.”

Getting beaten by a 135 natural pounder is a shame. You wanted to fight Munguia?? Plz Munguia would have dismantle yo u. You are the living proof that now days any tomato can can become a champ. Plz retire for…

[QUOTE=Roadblock;20441194]How is that gunna work, its Mannys title won in the ring, its not Haymons. I dont see how Haymon has any hold on the title especially when held by such a mega star like Manny, cant see any judge…

[QUOTE=champion4ever;20441149]Pac is going to have to defend that title over at the PBC where he won it. Keith Thurman was not a mandatory challenger at the time but a voluntary challenger. So if he wants his freedom to become a…

[QUOTE=mind_blown;20440951]Mikey Garcia just won a "title" from the WBC last week so he has plenty of options now. Both Eddie and Mikey have confirmed. Pacquiao is a free agent also. That is why Eddie is trying to make the Pacquiao…

[QUOTE=Sweet_Science_;20439517]Pac man walks through Garcia imo. Throws too many punches from angles for Mikey to counter.[/QUOTE] I dont see him walking through Garcia, thats Mikeys game if Manny came on to him, nope I see Manny out boxing him using…