Vanes Explains The Fallout With Don King Since Golovkin Fight

In the last few days, junior middleweight Vanes Martirosyan (36-4-1, 21 KOs) has been venting heavy over his fallout with veteran promoter Don King.

Vanes is on the verge of retirement from the sport, after sitting on the shelf since getting out knocked out by then middleweight champion Gennady Golovkin in May 2018. Vanes came in as a late replacement for Canelo Alvarez, who failed a drug test.

The contest with Golovkin was Vanes' first bout in two years time. 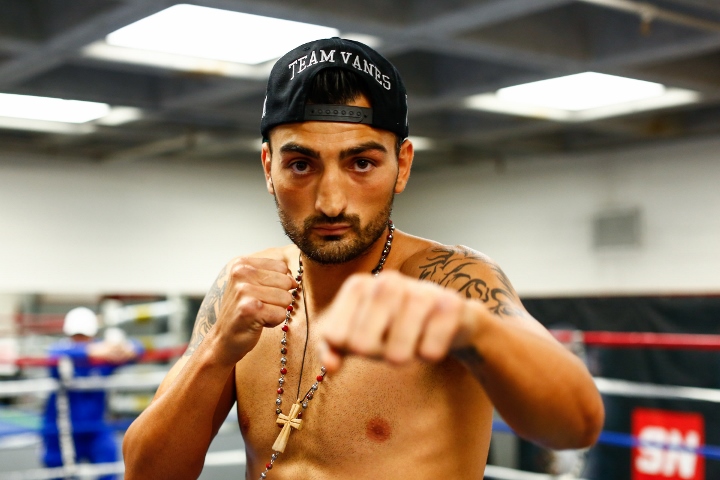 Vanes explained that he's been dealing with a lot of problems, outside of the ring, since the loss to Golovkin.

"I’ve been through a lot of depression since the Golovkin fight. It’s really hard to always think about a fight where you know that wasn’t you in there. I still get tagged in posts of the fight and it’s a reminder every day. It’s something that I want deleted because it wasn’t me in there and at the same time I did favors for Don King. I did a favor for HBO too, the show was going to be canceled, I saved a lot of people millions of dollars and at the end I didn’t get treated the way I should have gotten treated. Don took a lot of money from that fight and I just got a 1099 for the amount that he took. He wants me to pay taxes for the money that he took from me, it’s really ridiculous," Vanes told On The Ropes Boxing Radio.

Detailing the financial terms of the Golovkin deal, Vanes claims that King is attempting to dump a tax bill on his lap.

"Everybody said that Don King is a piece of sh*t, a bad promoter, a snake. The reason I went to him alone was because I wanted him to do at least one fighter good, at least be good to one person in your life. I tried to go against everybody and I got really screwed over," Vanes said.

"When I signed with Don King, he gave me 300k as a signing bonus. When the Golovkin fight happened, he said, “I’ve invested a lot of money in you, let me make some of that money back.” We went fifty-fifty on 400k, we split it in half. I ended up with 160k and he took 225k and he’s taxing me for the money he took. I even asked his lawyers to fix this and I still haven’t heard from them and it’s been a week and a half already."

Vanes' issue is not only with King, he's still very annoyed with the WBC. At one point, the sanctioning body had him listed as the mandatory challenger to the 154-pound title, but never issued an order to see him get his crack.

Vanes is still open to the idea of fighting again, at 154.

"Jaime Munguia, the WBO champ, I don’t want anything to do with the WBC, Munguia is a good fight to take, Jared Hurd, all of the champions! Anybody, I’ll fight anybody, any of the top guys, any of the champions. Not at middleweight, that’s even my weight, 154 is my weight class and I want to fight Hurd or any of guys," Vanes said.

The last person any fighter should ever sign with is Don King. Everybody knows hes a lying, thieving snake. Thing is i remember when Vanes first signed to Don King after leaving the PBC he was irate cursing at people…

[QUOTE=super-x;19511017]Sad to see fighters treated this way, im shocked anyone in this day and age would even consider king as an associate let alone promoter. The guy is a savage.[/QUOTE] He was warned..... "Everybody said that Don King is a…

[QUOTE=BIGPOPPAPUMP;19510948]In the last few days, junior middleweight Vanes Martirosyan (36-4-1, 21 KOs) has been venting heavy over his fallout with veteran promoter Don King. Vanes is on the verge of retirement from the sport, after sitting on the shelf since…

[QUOTE=anonymous2.0;19511436]As much as I agree with everyone here I also think that Vanes was mismanaged from the start and never had a good team on his side or at the very least had an adviser who would put a cork…

I'm lost.. didn't he announce retirement which was basically a salute to Don King? Now he's talking about fighting again and that DK screwed him over? Uh..ok.