Last May 20th, in the immediate aftermath of Jose Uzcategui being disqualified versus Andre Dirrell for a late punch after the sounding of the bell for the end of the eighth round, Dirrell's cornerman and uncle came over and sucker-punched an unsuspecting Uzcategui.

Lawson was placed on indefinite suspension by the Maryland State Athletic Commission. Last week that suspension was lifted as Patrick Panella, their Executive Director sent this email over to Fight Fax:

Please be advised that, effective immediately, the Maryland State Athletic Commission ("Commission") is lifting its current Indefinite Suspension (administrative  - imposed on May 23, 2017) of second (cornerman) Leon Lawson II as Mr. Lawson is complying with Commission requirements as related to Case No. MSAC-17-02 and as set forth and agreed upon via Consent Order. - Thank you. Best Wishes, Patrick' 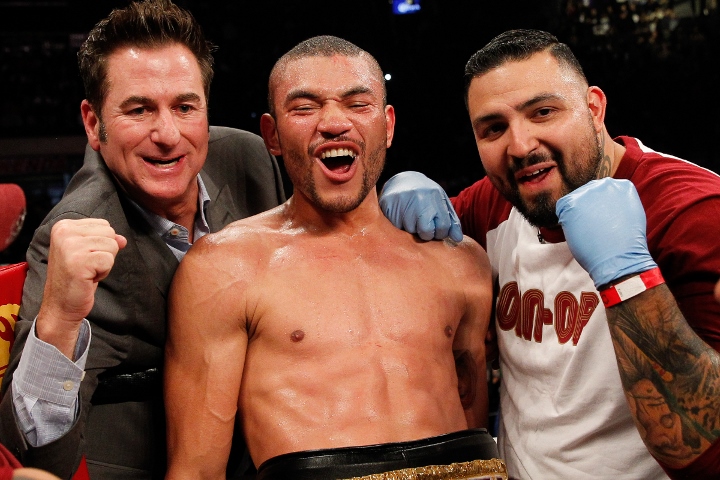 Sean Gibbons, who represents Uzcategui (who in his most recent bout stopped Dirrell in their rematch this past March and is now the IBF 168-pound titlist) was enraged and he told BoxingScene.com:

"When I saw it - and I had it forwarded to me by a person - the state of Maryland didn't even have the decency to let (Jose) Uzcategui  know, me know or anyone form his team know that they were letting this guy off suspension, which his insane.

(Jose) feels like he was a victim and now the wounds open again. Maryland is again victimizing him, they did nothing properly with this guy. I'm just beside myself, I'm sick, Patrick Panella, someone should punch him right in the mouth and then go do a years worth of whatever they do and then come back off suspension. I wish I could punch Patrick Panella right in the mouth because he's moron.

''And the state of Maryland is the most embarrassing I've ever seen. How can you let somebody - a licensed cornerman - physically assault a boxer, potentially end his career and then basically take no punishment other than a year suspension? We don't even know what he did to get off suspension.

"He never tried to at least say he was sorry to Uzcategui. Maryland is the biggest laughingstock show I've ever been to. In my 30 years in boxing I would advise everyone to stay away from Patrick Panella and Maryland."

When reached for comment, Panella declined to comment and this statement was given to BoxingScene.com by Theresa Blaner, the Director of Communications and Media Relations for the Maryland State Athletic Commission:

"The Maryland Athletic Commission is deeply committed to maintaining the highest safety standards relative to the regulation of combative sports for both its licensees and the public at large. It is within this context that the commission sought to address Mr. Lawson’s unruly conduct. Mr. Gibbons has confused the criminal court system with that of the commission, and in doing so has made inaccurate statements regarding Mr. Lewis’ consent order, as well as unfairly and inaccurately blaming Executive Director Patrick Pannella for the commission's determination. The commission’s consent order demonstrates Maryland’s tough stance on unsportsmanlike conduct and criminal actions committed within our jurisdiction. We stand by our decision regarding Mr. Lawson and the process by which that decision was reached. Now, as before, Maryland supports the boxing industry through fair but assertive actions that protect our competitors, licensees, and fans."

It was announced recently that Jose Uzcategui will be returning the ring on September 28th in Oakland, California in a non-title bout versus Ezequiel  Maderna on ESPN.

Crazy what this guy did in the ring. Crazy if the Maryland Commission is really going to reinstate him. No place in boxing for what this guy did. Should be a long time ban, especially since this guy ran like…

[QUOTE=THEFRESHBRAWLER;19060441]This post is spot on. I figured he had to be drunk or something. He used to be a good poster I don’t know what happened. I don’t always agree with you but that doesn’t mean I hate you.[/QUOTE] Turns…

Homie should never be allowed in a ring. PERIOD.

[QUOTE=THEFRESHBRAWLER;19060441]This post is spot on. I figured he had to be drunk or something. He used to be a good poster I don’t know what happened. I don’t always agree with you but that doesn’t mean I hate you.[/QUOTE] He's…

[QUOTE=THEFRESHBRAWLER;19059101]Surprise surprise guess who’s the first person to bring up race? A Mexican. Y’all are getting worse than the kkk with all this racial bs. I suggested a fine and 2yr suspension. Asking for a lifelong ban is just silly.…