Aleksandr Usyk no longer officially possesses any ties to the cruiserweight division.

Ten months after becoming just the fourth male boxer in history to claim undisputed championship status in the four-belt era, Usyk has relinquished the last of his alphabet titles. The last remaining link, the International Boxing Federation (IBF) title will now be at stake in Saturday’s World Boxing Super Series cruiserweight semifinals clash between Yunier Dorticos and Andrew Tabiti in Riga, Latvia.

“Both fights are now official world title fights,” Kalle Sauerland, chief boxing officer of Comosa AG told BoxingScene.com. “The IBF title will be at stake for the (Dorticos vs. Tabiti) contest tonight.” 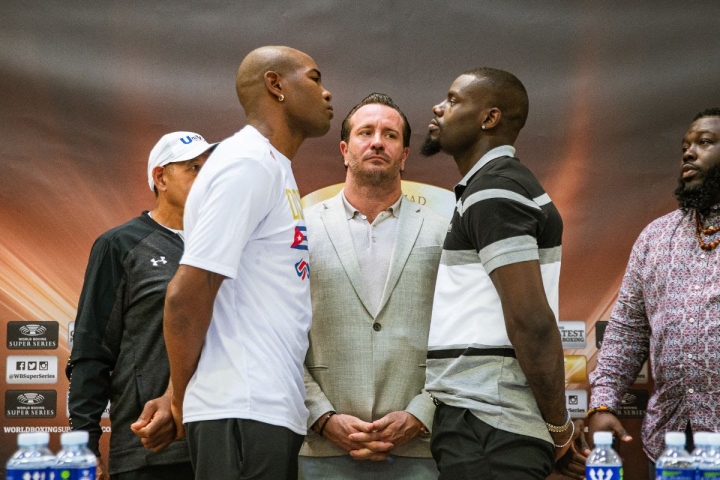 The interim version of the IBF title was initially at stake, with the sanctioning body willing to wait out Usyk’s next move. The Ukrainian southpaw ran the tables in Season One of the WBSS tournament, collecting all four major titles along with the WBSS Ali Trophy and distinction as the World (lineal) cruiserweight champion.

His run also propelled him to universal recognition as 2018 Fighter of the Year, to which he intended to follow up with a run in the heavyweight division. Usyk’s debut at the new weight was to come this past May, only to suffer a torn biceps injury in having to withdraw from his scheduled clash versus veteran contender Carlos Takam.

By that point, the World Boxing Association (WBA) had already been vacated and functionally returned to mandatory challenger and former titlist Denis Lebedev. The World Boxing Council (WBC) and World Boxing Organization (WBO) have since followed suit, with the WBO naming interim titlist Krzysztof Glowacki as its full titlist.

Glowacki will defend the strap versus former WBC titlist Mairis Briedis in the main event of the WBSS semifinals doubleheader. There were talks of the WBC title also being at stake, but a dispute with the WBO over the assignment of ringside officials put that status very much in jeopardy—initially withdrawing its sanction but since opting to reconsider even as the bout draws nearer.

Usyk managed one successful defense of all four titles, scoring an 8th round knockout of Tony Bellew last November on the road in Manchester, England. He first claimed the IBF and WBA titles in the WBSS finals last July, scoring a 12-round decision win over previously unbeaten Murat Gassiev while already carrying the WBO and WBC titles in tow.

One year prior to the tournament, Usyk (16-0, 12KOs) collected his first title in outpointing Glowacki in Sept. 2016 for the WBO strap. He added the WBC belt with a narrow points win over Briedis in their season one semifinals bout last January.

The bulk of his title reign took place on the road, beating Glowacki in Poland, Michael Hunter in the United States, former titlist Marco Huck in Germany, Brieidis in Latvia, Gassiev in Russia and Bellew in England. His lone title fight on neutral soil came in his first title defense, scoring a 9th round stoppage of South Africa’s Thabiso Mchunu as part of a Dec. 2016 HBO-televised tripleheader in Southern California.

Saturday's upgraded status will mark the first career title fight for Las Vegas' Tabiti (17-0, 13KOs). For Dorticos (23-1, 21KOs), it's a shot at becoming a two-time titlist, having previously held the WBA belt prior to his 12th round knockout loss to Gassiev in their season one semifinal bout last February.

That fight just became much bigger.