Joe Cordina will meet Scott Cardle in a lightweight clash in a couple of months’ time.

Wales’ Cordina is the current Commonwealth champion and is set to come up against the former British champion on November 10. 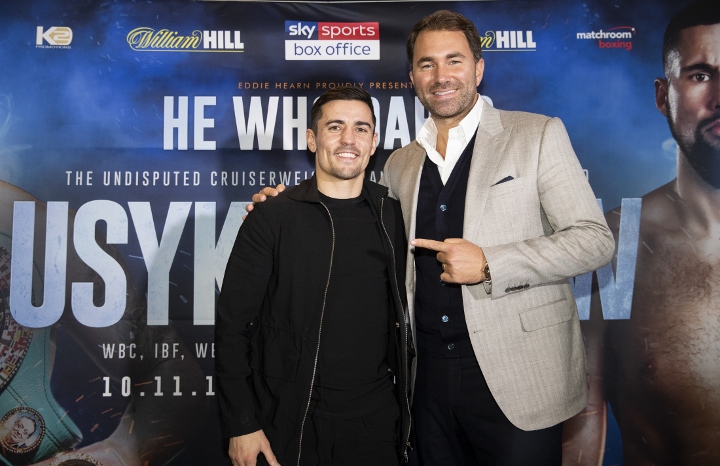 Cordina won the Commonwealth title against Birkenhead’s Sean Dodd back in August at the Ice Arena in Cardiff, while Cardle returned on the same bill under new trainer Matthew Ellis.

As it stands, it is understood that the fight will be only for ‘The Welsh Wizard’s’ rainbow belt.

But with outright British champion Lewis Ritson moving on to European level against Francesco Patera on October 13 at Newcastle’s Metro Radio Arena, the Lord Lonsdale belt could well come into play for a fight that been in the rumour mill for some time.

Former WBA lightweight champion Anthony Crolla will also fight on the bill that is topped by Britain’s first four-belt undisputed clash between Usyk and Bellew.

The Manchester man is set to face Indonesia’s Daud Yordan in a final eliminator for his old title -- the aforementioned WBA belt -- that is now held by Usyk’s fellow Ukrainian Vasyl Lomachenko.

Further details regarding the supporting cast to the card billed ‘He Who Dares’ will be revealed in due course.

[QUOTE=Adamsc151;19136286]Very true, but it'll still be more heartbreak for him I reckon. Cordina is one of the slickest prospects I've seen; he's not got the animosity of Ritson, but he can make Cardle look like a has-been and stop him…

[QUOTE=Stevekrazy;19135296]What does winning the British title outright or 'for keeps' mean? I understand you earn this after three successful defenses but never understood what it meant exactly![/QUOTE] The belt costs over £4000 to make so giving one away like an…

Just listening to interview, Hearn wouldn’t say who when pressed but two new DAZN signings confirmed who will be headlining their American November and December cards. The bigger signing on the December (which isn’t Ppv)? So any thoughts? Must be…

[QUOTE=Mick Higgs;19135239]With Cardle just one notch away from winning the Lonsdale belt it would be a crime if the BBBofC didn't sanction a fight with Cordina fight for the vacant British title.[/QUOTE] Very true, but it'll still be more heartbreak…