Oleksandr Usyk is not looking to walk away from boxing any time soon.

Recently, close friend Oleksandr Gvozdyk decided to retire from the sport at the age of 33. Usyk is the same age.

Both men were part of the 2012 Olympic team for Ukraine. Usyk won a gold medal in his weight class, with Gvozdyk walking away with bronze. Vasiliy Lomachenko was also a part of the team and won his second gold medal. 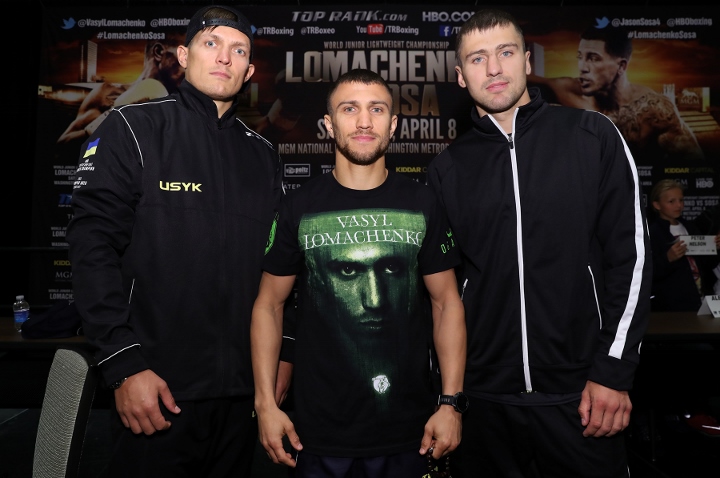 Gvozdyk last fight took place in October of 2019, when he suffered a knockout loss at the hands of Artur Beterbiev in a light heavyweight unification.

He planned to come back this year, but instead made a decision to pursue some business ventures outside of boxing.

"Both are great gentlemen and prominent athletes. All people know Gvozdyk as an extremely intelligent man with high-profile analytical skills.

"I had a chance to negotiate the promotional deal with both. Usyk used to make decisions collecting opinions from the advisors around him. Gvozdyk made an impression of a man who takes the final decision himself. His manager Egis Klimas told me that Gvozdyk took the decision to switch to commercial activities (private business). I never heard more details.

"Usyk has no plans for retirement at this stage. As long as he stays victorious he will look for higher results. Everyone has to finish his career sooner or later. But Usyk wants to make history becoming the only man to be undisputed in two weight divisions [in the four belt era]."

Evander Holyfield is the only man to become the undisputed cruiserweight and heavyweight world champion in the three belt era (WBC, WBA, IBF).

Usyk unified the entire cruiserweight division in the four belt era (WBO, WBA, WBC, IBF) - and now wants to do the same at heavyweight.

Currently he is expected to face Derek Chisora, possibly in October. As the WBO's mandatory challenger, he expects to face champion Anthony Joshua by next year.

[QUOTE=PRINCEKOOL;20622869][B][U]Overrated. [/U][/B] Usyk living off the stereotype that Eastern European boxers are superior technically 'But in reality? [B][U]Usyk is a simple straight up and down fighter'.[/U][/B][/QUOTE] Well, he's more skilled than most of his current division, so if he's a…

[QUOTE=kafkod;20625341]I understand your meaning now, and yes, we are only arguing about semantics. I think Bellew was still ahead on 2 judges scorecards when the KO happened, btw. But Usyk always starts slow and finishes like a train, and Bellew…

[QUOTE=JcLazyX210;20625301]But if the fight got called off due to a accidental head butted and went to the cards after the seven round, Tony would had been the winner of the fight for me.[/QUOTE] He was ahead on 2 of the…

[QUOTE=JcLazyX210;20625298]I said he was starting to lose the fight. I had him up only by one point, however I notice he started to face out and I thought to my self he’s not going to make it.The next round he…