Yordenis Ugas understood the industry perception when he returned to the ring in 2016. A two-year absence, on the heels of back-to-back losses and moving up in weight just never figured to end well.

At least that was the train of thought among everyone outside of his own team. It played perfectly into his first fight back, even in enduring an opponent change with Jamal James replacing injured Bryant Perrella on short notice. Ugas adjusted to the late switch just fine, scoring a stunning upset win and handing James his lone career defeat to boot.

Seven wins later, the 32-year old Cuban welterweight now finds himself on the title stage. The last of his eight-fight win streak—a 12-round decision over Cesar Barrionuevo last September—earned Ugas a mandatory title shot versus Shawn Porter, who won his belt in the main event of that very same Brooklyn card in a decision win over Danny Garcia. 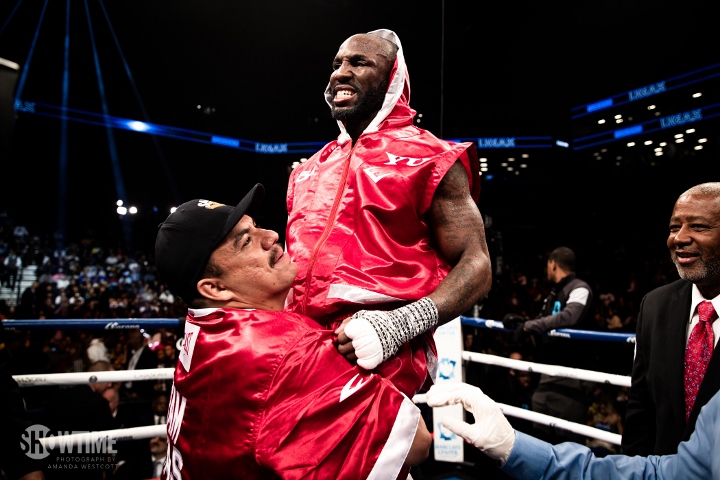 The two will now collide on March 9 at the Dignity Health Sports Park in Carson, California. For Ugas, it’s his first career crack at a major title—coming more than five years after and a full division above where anyone even gave him a chance of making an impact in the sport.

The secret to his success? A little bit of rest and a cross-country move.

“I just felt like I needed to change my team and my lifestyle,” Ugas (23-3, 11KOs) revealed during a recent media conference call to promote the title fight. “I moved to Las Vegas (from Miami), where I’ve training with Ismael Salas and getting back to the old Yordenis Ugas. A lot of it really just has to do with the change scenery.

It’s been nothing but positive thoughts for Ugas since his triumphant return. The former amateur standout was once groomed as a can’t miss super lightweight prospect, but at 5’9” and admittedly big even for a welterweight had struggled to squeeze down to or even near the 140-pound limit.

All three career losses came versus fellow unbeaten prospects, including an eight-round defeat versus Amir Imam in May ’14 which prompted his abrupt exit from the sport. The bout marked the last time Ugas classified himself as a super lightweight, with all eight bouts since his Aug. ’16 return coming at or above the welterweight limit.

“When you struggle to make weight, you don’t think about how it affects your body,” notes Ugas, who additionally attributes the struggles to his never previously being in the right frame of mind. “I’m really big for 147, never mind 140. But that’s in the past.

“After those two losses, I took a step back and told myself, “Your chance is going to come.” It’s here now, new team and atmosphere and my big chance is here.”

Porter is going to have his hands full with this guy.

Can't root against the guy. I love seeing turnarounds like this. But I have a hard time seeing him beat Porter. I do think he'll give a good account of himself win or lose doe so even if he doesn't…

First fight I saw Ugas in was vs Jamal James. Been following since. I like the way he carries himself in and out the ring. Although I do favor porter to win this fight, I would be very happy to…