Heavyweight contender Tyson Fury is jumping in with both feet - into the world of  WWE.

As BoxingScene.com reported late last night, Fury appear on WWE's Monday Night Raw, which is carried by the USA Network.

The heavyweight boxer was in attendance at Friday night’s WWE SmackDown event. The show was heavily hyped due to it's network debut on FOX. 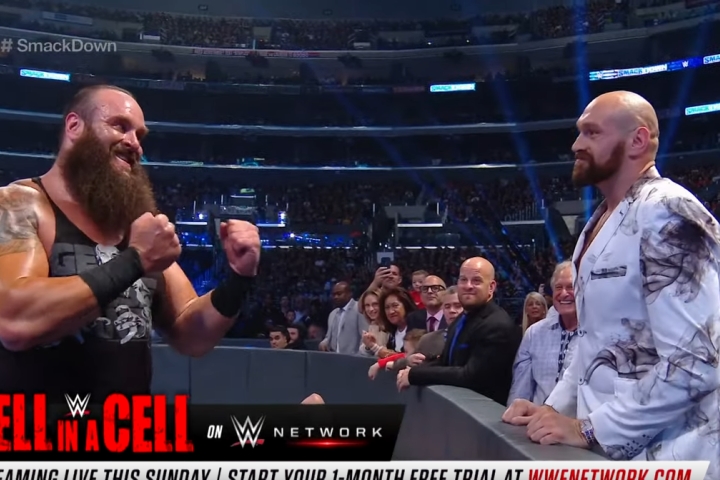 Fury was part on an angle with WWE star Braun Strowman.

Strowman initially appeared to taunt Fury by raising his fists to the former world champion. There was an exchange of words - before the angle escalated later, when Fury jumped the guardrail to come after Strowman - and he was restrained by security officials.

WWE would then announce Fury's appearance on their upcoming edition of Raw.

The WWE issued a statement, revealing that Fury would have an "open mic" to say whatever he wanted on their broadcast.

Fury took to social media to issue a warning to Strowman.

“I was insulted in front of my full family by Braun Strowman, it got a little bit heated and we saw what happened,” Fury said. “If Braun Strowman doesn’t behave himself, he’ll get some of these hands, the big dosser.”

Fury is slated to face WBC heavyweight champion Deontay Wilder in a rematch, on a date in February. The pair fought to a controversial twelve round split draw in December 2018.

Wilder will first return to the ring next month at the MGM Grand in Las Vegas, when he faces Luis Ortiz in a rematch.

[QUOTE=Boxingfanatic75;20106282]I’m quite serious. And you speak of Muhammad Ali? He was ALREADY a global phenom and the most recognizable human on earth. Boxing was also in its prime as a main stream sport. He didn’t need to participate in a…

[QUOTE=Jkp;20106587]When they were retired. Fury should try promoting himself by fighting a decent opponent. Crazy idea i know...[/QUOTE] not a wrestling fan, and not much of a Fury fan due to who he has fought lately but I dont knock…

Quote: Originally Posted by PunchyPotorff View Post There was 5-7K at Fury's last 2 fights, fighting essentially unknowns. And like some others have said... fighters gotta self-promote to get their name out there. Just like a band tours in specific…

Super smart by Tyson Fury getting involved with WWE. Floyd did WWE and DWTS before the Money persona kicked in

Fury preparing for life after Wilder