Tyson Fury has promised to help Tom Schwarz come back from his first professional defeat. 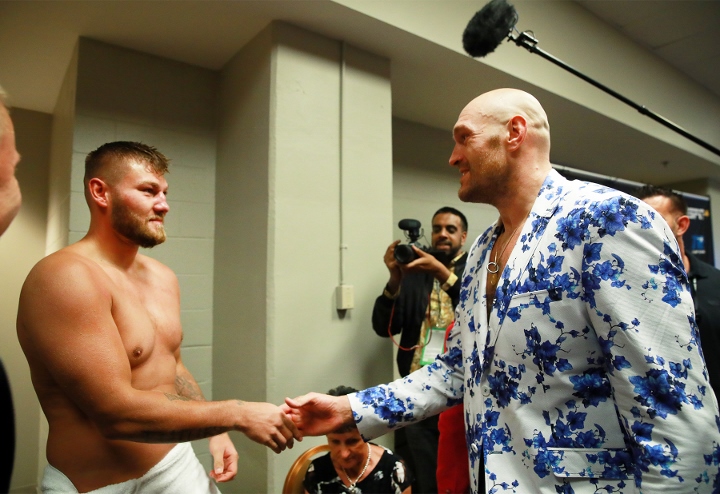 But ‘The Gypsy King’ made a vow after the fight to bring the 25-year-old to England to join his training camp.

Fury will return to the ring later this year — on either September 28 or October 5, potentially against drugs cheat Jarrell Miller — and he also wants to give Schwarz a chance to shine on the undercard.

“Tom, God bless you, and listen, I want you to come to England and train with me for a bit,” Fury said to his latest victim in his dressing room after the fight in a clip shared by BT Sport. “Hopefully, we’ll try and get you on my next card, and that’s a promise. I don’t say things I don’t back up.

“I’d like to invite you to come and train with me and you’ll come back better."

Details regarding the Fury’s exact return date and the location of the fight will be revealed in due course.

OH ok what a guy backs up what he says. propaganda train in full hype mode

[QUOTE=Rockybigblower;19839638]Why won't he put Hughie on his undercards?[/QUOTE] To save mfers eyes from seeing his acne filled back & sh^tty boxing style.

[QUOTE=Ake-Dawg;19840139]Great plan by Arum/Warren. Put Schwartz on the undercard of Fury's next fight against a cab driver/bartender. Have him beat the guy up, making Fury appear even more formidable. The casuals may lap it up![/QUOTE] ESPN pundits will also say…

[QUOTE=Rockybigblower;19839638]Why won't he put Hughie on his undercards?[/QUOTE] I’m not sure they speak anymore, since Tyson fell out with Peter (Hughie’s old man) When Hughie and Peter do interviews, they interviewers are told in advance not to talk about Tyson.