It was a chilly February day and Tyson Fury was in particularly fine form. He was sat in a room at the art deco Midland Hotel in his home town of Morecambe, with his back to some windows looking out on Morecambe Bay and beyond to the Irish Sea. And he was in the mood to tell a story.

It was 2016 and Fury was heavyweight champion of the world. Indeed the morning get-together on the north-west coast of England was for Fury to be presented with his championship belt by The Ring. Then he sat down and gave the journalists in attendance some copy.

There had been an offer, he said, to stage his rematch with Waldimir Klitschko in the Middle East. Nothing unusual in that, even then. But the offer, he said, was for it to take place on a super yacht, in private, with no TV. And everyone there would have to pay $1 million for their ticket.

It’s a great tale, if hard to believe, especially in light of what happened next.

After handshakes will all those present, Fury did an interview with Mike Costello, of BBC Radio Five Live. Rather than talk of yachts and rematches, he promptly told him he wasn’t going to box again and would retire, a story that would come out the following day after the “yacht” story had made the newspapers. 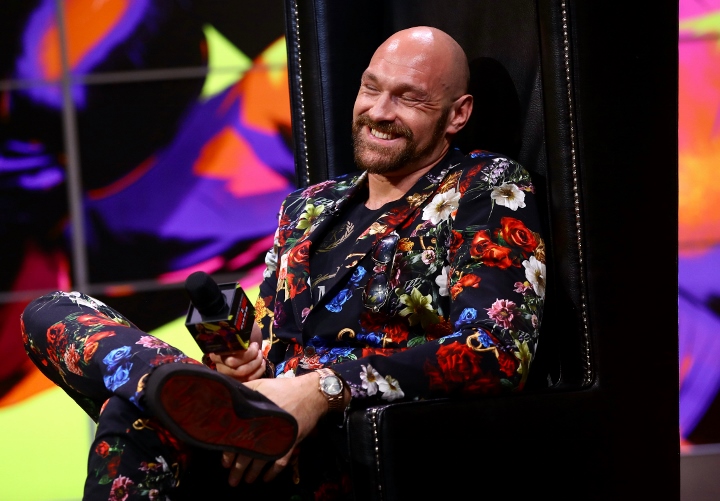 Fury has always been a complex character, but here he was, five minutes apart, two total extremes. Did he believe either story? Or was he just having fun?

His tall tales have been called out by none other than Conor McGregor in the past two weeks, after he responded to Fury’s claims that the Irishman has been talking to him about coaching him for a future in MMA by saying that he had never met the boxer. “It’s not a bad little story, so I let it roll,” said McGregor, describing Fury as “a mad man”.

In the modern boxing media, where video journalists generally outnumber writers, the soundbite is king. And Fury gives good soundbites. Whether they are true of not doesn’t really matter. What counts is that people click.

Fury has always been a good talker. Indeed his inability to judge when to stop talking often got him into trouble.

It’s no overstatement to say that he was widely unpopular when he was world champion. Twice dates were set for his rematch with Wladimir Klitschko at Manchester Arena and it was proving a tough sell. The day after he handed back his belts saying he was medically unfit to box, he turned up in Manchester to watch his friend, Isaac Lowe, box and was roundly booed.

Back in those days, lots of his videos courted controversy. There was one threatening to attack the journalist who had highlighted his views on homosexuality – opinions he had openly given in an interview. Then there was one saying women’s best place is in the kitchen, another, which was bizarrely filmed by his uncle, Peter, in his hotel room included a tirade about Jewish people running banks and the media. Those are subjects he doesn’t discuss in videos any more, along with his UKAD doping case.

It was also social media that rebuilt Fury’s reputation. Helped by a backlash against Anthony Joshua’s corporate image, Fury was champion for those who wanted to see Joshua lose. His comeback from the days when his self-destructive streak took over also inspired many.

One of the problems with so many on-camera interviews – whether online journalists or for TV – is that time is so short, there is not much appetite for challenging questions. So the soundbites are rolled out and the outlandish remarks are gobbled up as good material.

I first spoke to Fury in 2007 and have interviewed him dozens of times since. I wouldn’t claim to know him well. He can blow hot and cold, be a good or a bad interview, depending on his mood, if he is feeling happy, argumentative or bored. He was once described to me as “very intelligent but not well read”. He is certainly nobody’s fool and part of the attraction with Fury has always been you genuinely don’t know what he is going to say.

Sometimes he will just make stuff up, like one newspaper huddle where he insisted throughout, despite it being obviously untrue, that he was training in Melbourne and had been welcomed with open arms by the Australian public.

There is an advantage to being unpredictable. Take, for instance, Fury’s insistence that he will knock Wilder out this time, the reason, he claims that he has switched trainers.  Logically, Fury’s biggest chance of victory is to box and reduce Wilder’s opportunities of landing a big punch. Having called foul on the judges first time, Fury must know his chance of receiving a bad decision have declined drastically.

But Fury knows Deontay Wilder is watching and listening and any doubt he can put into the champion’s mind helps. It worked for him in the first fight, when Wilder was so desperate not to fall into the same trap that Klitschko had – by essentially not throwing enough punches – that he was wild and wasteful. He will be expecting Fury to try and counterpunch again this time, he won’t have anticipated Fury coming after him.

The very fact that he took time out from his boxing career to embark on a wrestling career, albeit brief, when he had a date in the diary for a world heavyweight title shot was probably more bizarre than any story Fury could have come up with. Bob Arum said that WWE executives called Fury “a natural”, but if the job description is for a big guy who could look into a camera, keep a straight face and tell fantastic tales, Fury has been doing that for a long time.

[QUOTE=aaronbnb;20354062]Thank you for the info. He said he donated his entire purse (9 million pounds) though and not to random Gypsy friends, but to UK charities. [url]https://talksport.com/sport/boxing/491322/tyson-fury-news-gypsy-king-worth-deontay-wilder-purse-charity-rematch/[/url] A quick Google search finds no record from anyone other than himself that…

[QUOTE=Roberto Vasquez;20353735]Yes but like any good film - it still needs the element of truth for it to be funny/entertaining. Sure he will keep his die-hard fans onboard but he's losing everyone else. Fury was at his best when he…

[QUOTE=leeroy84;20354114]Hey, don't shoot the messenger :-) I don't agree with it either but it's not really a subject of controversy where I live, it's common knowledge, regularly flaunted by the local Gypsy population and is frowned upon by the locals…

[QUOTE=aaronbnb;20354062]Thank you for the info. He said he donated his entire purse (9 million pounds) though and not to random Gypsy friends, but to UK charities. [url]https://talksport.com/sport/boxing/491322/tyson-fury-news-gypsy-king-worth-deontay-wilder-purse-charity-rematch/[/url] A quick Google search finds no record from anyone other than himself that…

[QUOTE=leeroy84;20353260]Funnily enough, this one is actually not a lie (Although a very embellished truth to say the least) Go on google earth and take a trip down Oxcliffe Road and surrounding areas in Morecambe, UK. This is a predominately Gypsy…